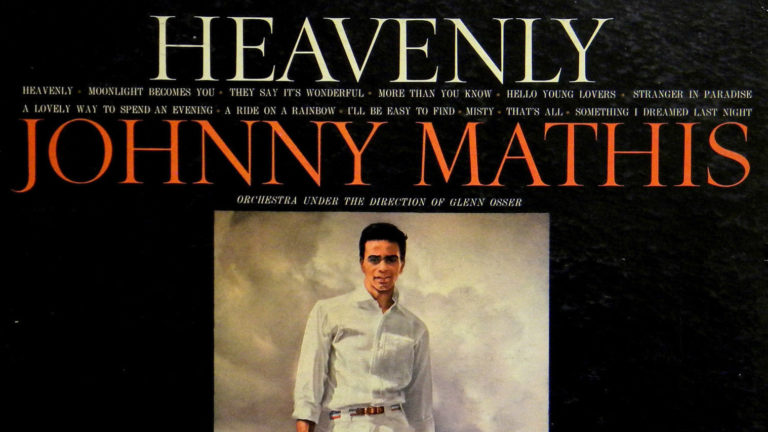 “Heavenly” by Johnny Mathis was the seventh best selling album of the 1950’s. The album spent a total of 295 weeks on the Billboard charts, five of which were spent at number one. Many of his albums have gone gold or platinum, and he has sold over 350 million records internationally. He has been associated with many different genres including jazz, traditional pop, rhythm and blues, soft rock, Brazilian music and Spanish music. From what I can tell, “Heavenly” is strongly influenced by jazz and rhythm and blues.

Mathis has cited Nat King Cole as on of his musical inspirations, which I can pick out of his music almost immediately. Perhaps this is because I only reviewed a Cole album in my last installment of Variety Show, but I can tell how similarly their voices both meld with the music behind them. I still believe that Cole’s voice is nearly incomparable to most other vocalists, including Mathis, but I can tell where the inspiration was drawn.

If you were to listen to either Cole or Mathis’ orchestras on their own, you would notice that they are very simple. But they both use their voices to draw them into a spotlight. The voices and the strings are one and the same.

The third track on the album is the first that really sticks out to me. “A Lovely Way to Spend an Evening” initially reminds me of the scene in The Sound of Music when Leisel and Rolf are taking their walk (one of the best scenes in the film).

The subtlety of the harp combined with the eventual swell of the strings makes the song very romantic paired with its lyrics. My favorite of the beautiful lyrics is “Catching a breath of moonlight, humming our favorite tune/This is a lovely way to spend an evening.” It is simple and loving and soft, and I think that it is stunning.

I am going to briefly mention the next song, “Ride on a Rainbow,” because I think the lyrics are a teensy bit too creepy for me.  They kind of sound like Johnny Mathis kidnapped a girl he was lusting over and took her, via rainbow, to space. However, I also like the Beatles song “I Am The Walrus” more than I usually care to admit, so I can’t really say anything about lyrics being too odd.

I recognized Mathis’ song “Misty” as soon as I heard it. I feel like I recognize it from a movie or TV show, but the song has been covered so many times that I can’t be sure this version is the one I’ve heard. Ella Fitzgerald, Sarah Vaughan and Frank Sinatra are among the artists that recorded covers of “Misty.” The song was a major plot point in a movie directed by and starring Clint Eastwood, Play Misty for Me.

I can definitely see where the hype for this song comes from. I find it comforting, especially in the way that Mathis sang it. The string orchestra is a huge part of the tune, particularly in the first few seconds. “Misty” reminds me of reading in a favorite coffee shop, a sure fire way to make it on my list of favorites.

“More Than You Know” is a charming song. Mathis sings of a woman who could give him nothing but her love and would leave him content. He does in the process tell her that she isn’t succeeding at life and that her friends always end up abandoning her, which would personally ruin the charm for me. Maybe not if it was sung to me like this? I’m not sure, but I still find the song to be precious in the way that it sounds. If I wasn’t listening to the lyrics too hard, I might fall for it.

Lastly, “Moonlight Becomes You” is a song that I recognize. Bing Crosby’s cover of the song is the most popular, but it was originally written for a movie named Road to Morrocco in 1942. On par with Frank Sinatra’s “The Way You Look Tonight”, this song is possibly the best way to tell somebody that they look beautiful. ‘

“Stand there just a moment, darling, let me catch my breath/I’ve never seen a picture quite so lovely/How did you ever learn to look so lovely?” When Mathis sings it, he makes the simple, love-letter-esque lyrics into something much more complex.

So far, my journey through the 1950’s has stayed extremely consistent. There have been strings featured on each album, which I’m sure we’ve all noticed I love by now. They have each reminded me of the opening song to a classic Disney film. They all flowed together incredibly well, as though the entire album was one continuous track. They all have strong jazz elements for at least a portion of the album, and the singers’ voices tend to take me away with them.

This album didn’t differ too much. The most significant difference, in my opinion, would be the much stronger emphasis on string orchestras as opposed to a band. There was rarely a hint of a brass instrument in most tracks, which was a welcome break. I could just be saying that because I could listen to an orchestra until the day I die and be completely content, but I also don’t see how it’s possible for a person not to be enchanted by it.

Listen to “Heavenly” by Johnny Mathis here on YouTube or below on Spotify.

Variety Show is a biweekly column that is in the midst of analyzing the best-selling albums from the 1950’s to the 1990’s. One of the top 10-20 albums from each decade will be reviewed, discussed and/or analyzed each week in chronological order. The column aims to draw cultural, musical, and other contextual connections between artists and albums over time, as well as go on a broad but refined journey. Next week we’ll be talking about “Gunfighter Ballads and Trail Songs” by Marty Robbins, the sixth best-selling album from the 1950’s.