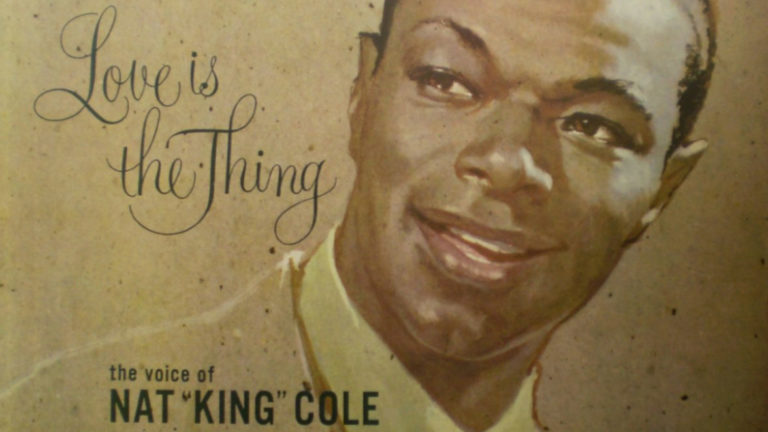 “Love Is The Thing” was released by an artist named Nat King Cole in 1957. Cole was submerged in a musical life from the time that he was a kid, performing for the first time when he was four years old. When he was in high school he was in a music program, and by that point in time had learned to play both the piano and the organ.

The year before “Love is the Thing” was released, Nat King Cole debuted his television show The Nat ‘King’ Cole Show on NBC, making him the first black person to host a variety show. At the time, this was a gigantic controversy. The show was extended from 15 minutes to 30 minutes after seven months of being on the air, but Cole decided to end it after around a year. He commented that “Madison Avenue is afraid of the dark,” in reference to his show’s lack of a national sponsor.

Nat King Cole was also semi-politically involved, using his musical talents to make an influence. He sang at the Republican National Convention in order to show support for Dwight D. Eisenhower, and at the Democratic National Convention later on in support of John F. Kennedy. He also sang alongside Frank Sinatra at a gala following Kennedy’s Inauguration, and spoke with Kennedy about civil rights.

All that I’d ever known about Nat King Cole himself is that he is a jazz singer, and I am in love with the soul imbedded in jazz music. I am in love with the style of strings (string bass and cello mainly) that are commonly in jazz music, as well as the sometimes gritty and loud, sometimes soft and mellow brass. Especially since strings have been an element in the other two albums that I’ve listened to from the fifties, I’m assuming that they will be featured on “Love is the Thing” as well.

I have heard a lot of Nat King Cole music, but not outside of the context of a Pandora station or jazz playlist on shuffle. While my love for jazz music is strong, my artist recognition and knowledge of the genre is weak. I hope that Nat King Cole can lead me even further into the jazz-fanatic light.

One thing that I noticed from listening to the album the first time is that I’ve heard a lot of these songs before, and this album was composed of a lot of covers. I’ve decided that I’m going to choose my favorites from “Love is the Thing” and compare them to the originals or other covers, since I want to learn about and listen to as much jazz as possible.

My list of favorites started with the first track. As soon as the track “Stardust” begins, I know that I will fall in love with this album and Nat King Cole. The strings swell into what turns into the most beautiful love song that is (in my interpretation) actually about a love that is no longer.

Cole sings of the memories of a beautiful relationship and of how the pain it brought when it ended, turned life into something more beautiful. It takes a special type of song to make a breakup seem perfect. The lyrics that stand out the most to me are “Leaving me a song that will not die/love is now the stardust of yesterday/the music of the years gone by.”

“Stardust” was originally composed thirty years before Cole’s release of “Love is the Thing” by a man names Hoagy Carmichael. There are many different variations, and the most obvious difference between them and Nat King Cole’s cover is that Carmichael’s original recordings sound like they are from the 20’s, and Cole’s sounds like it was from the 50’s. Of course they are going to sound different, so much so that I don’t hear very many similarities. Two of Carmichael’s recordings were solely instrumental, while Cole’s rendition was very vocally focused. They are both beautiful in their own way.

“Stardust” covered by a multitude of artists including Willie Nelson (he covered it beautifully and took the song in an entirely different direction), John Coltrane (who almost doubled the length of the song and made it even better) , and Michael Bublé (I would’ve expected him to do something different with it, and I’m not too much of a fan).

I was really hoping that “When Sunny Gets Blue” would be a song about the literal sun because I thought it would be interesting, and in most ways it could be. It was also about a girl, and the way that her sadness effects her as well as the skies. Originally written for Johnny Mathis (who I will be talking about in the next Variety Show,) the song was released for the first time in 1956.

Mathis’ and Cole’s versions of the song are noticeably different. Mathis’ voice is clearly different than Cole’s. It is much higher, not that a voice can easily get deeper than Cole’s. It also featured a guitar and harp in it’s instrumental line-up, and not nearly as much brass or string instruments.

For the last difference alone, I lean towards liking the release on “Love is the Thing” much more. I’m the type of person to appreciate the way a voice works with and melds with its instrumental accompaniment more than either component independently. Johnny Mathis’ voice seems independent from his music, which Nat King Cole has a way of just sinking into it.

“When Sunny Gets Blue” was later covered by Nancy Wilson, Barbara Streisand, Chet Baker, Charlie Rouse, McCoy Tyner, and a ton of other artists since it’s original release. I love Rouse’s for it’s strong brass, and Tyner’s for the way the piano seems to have a mind of it’s own.

“At Last” is probably the best known song on the album. The song was originally written in 1941 for a film called “Sun Valley Serenade” by Mack Gordon and Harry Warren. The song was cut from the film (which is probably the only time that has ever happened with “At Last”, at least after Etta James covered it.)

The original doesn’t feel like there is too much passion in it, which is why I enjoy listening to Cole’s cover a million times more. Both the voice and the instruments are both much fuller of emotion and have substance to them. (I’m also a fiend for those strings, they sound so fantastic.) Beyoncé also covered the song in 2008, giving Etta James credit for paving the road for black women in music, and she sounds amazing.

I would one hundred percent listen to this album again. It’s only thirty minutes long and the songs flow together so well that it’s relaxing and peaceful and easy to listen to. Jazz is the easiest music for me to listen to in order to be productive, so I added this album to at least four playlists. There wasn’t anything that I didn’t love about “Love is the Thing.”

The thing that I loved most (which is shocking when there were strings everywhere) is that Nat King Cole’s voice is perfect. I never say that people should sing me to sleep because to me it seems creepy, but Nat King Cole should be revived from the dead and sing me to sleep consistently. I was continuously stunned by his voice each time the track changed or I listened to a song over again because oh my god, his voice was always perfection.

A comment that Cole made on his own voice has stuck with me. “ … I sang the way I felt and that’s just the way it came out.” This quote is haunting as well as magical. Sometimes his voice could reach places I haven’t been able to imagine yet. What a way to feel that must have been.

So far, the albums of the fifties sound extremely similar. I’ve made this comparison before in my articles, but they do sound like they’ve come from classic Disney film soundtracks. More specifically, they sound like the opening songs from movies such as Alice and Wonderland and Peter Pan. When I’m listening to them I feel nostalgic for a time that I wasn’t even alive for.

Listen to Nat King Cole’s “Love is the Thing” here or below.

Variety Show is a biweekly column that is in the midst of analyzing the best-selling albums from the 1950’s to the 1990’s. One of the top 10-20 albums from each decade will be reviewed, discussed and/or analyzed each week in chronological order. The column aims to draw cultural, musical, and other contextual connections between artists and albums over time, as well as go on a broad but refined journey. Next week we’ll be talking about “Heavenly” by Johnny Mathis, the seventh best-selling album from the 1950’s.

One response to “Variety Show: “Love is the Thing” by Nat King Cole”