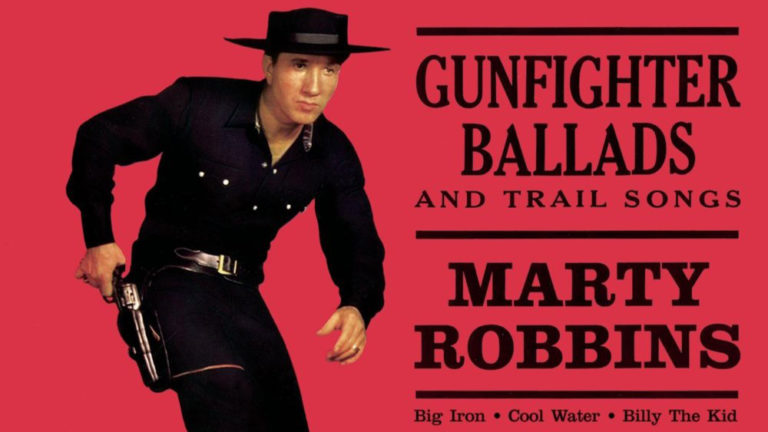 “Gunfighter Ballads and Trail Songs” was the sixth best selling album of the 1950’s. Marty Robbins recorded the album in 1959, and it was given a gold record status by the Recording Industry Association of America in 1965. The album made it to #6 on the US Pop Albums Chart, and a single from the album, “El Paso,” was number one on both pop and country charts by the end of 1960.

Marty Robbins lived a very successful and full life. He was a singer, songwriter, actor, and could play multiple instruments. He used his musical talents to create 52 studio albums throughout his career. He also had a NASCAR career, almost winning a Rookie of the Year award, but rejecting it after admitting to cheating. After he died at the age of 57 in 1982, NASCAR named an annual race after him, called The Marty Robbins 420.

I’ve heard one single Marty Robbins’ song before as I watched my ex-boyfriend play Fallout and listen to the game’s soundtrack on repeat. “Big Iron” was put next to some of my other favorite artists: Bing Crosby, Ella Fitzgerald, Dean Martin, Frank Sinatra. That being said, I have some high hopes for this album. If some of my favorite musicians were placed alongside Robbins, there’s a good chance that I’ll like it. Still, I want him to do his musical comrades justice.

“Big Iron,” the first song on “Gunfighter Ballads and Trail Songs,” is really catchy (I say after twelve hours of the it being stuck in my head). I can see the appeal to Robbins’ voice since it sounds perfect for the music he’s singing along to, but I could do without the repetitive ending to the end of each verse of the song in order to give it some variety.

The song tells a story of a man who shoots an outlaw that has murdered twenty other people so quickly that the outlaw didn’t even have a chance to react. It’s very empowering if you would’ve been the I-feel-like-roaming-around-carrying-a-gun-and-ultimately-saving-the-day type, but I personally still enjoy the song without having a thirst to kill.

The next song, “A Hundred and Sixty Acres” is extremely satisfying to listen to since all of the four vocalists (Robbins as well as Tompall & the Glaser Brothers) are constantly harmonizing. I would’ve liked to hear what the song could sound like if there were more variety in the harmonies, but I’m still satisfied with the song remaining the way it is. It’s only a little bit less than two minutes long, but I wish it’d been longer.

“The Strawberry Roan” is about a man who is asked to tame a horse as his job. As soon as he hits the saddle, the horse bucks and he flies through the air. At this point in listening to “Gunfighter Ballads and Trail Songs,” I realize how repetitive the melodies and music can be.

The same tune tends to repeat itself many times throughout the same song, which I don’t think was an issue for me when listening to the album all the way through. Now that I am repeating the songs several times to catch all the lyrics and comprehend the stories being told, it is getting really exhausting to hear the same thing over and over again.

The final song that stood out to me would be “The Hanging Tree.” It stands out because this is the love song of the album. There are a few other songs that could be construed as love songs, but this is only one of two that say it out loud. (The other song focuses much more on a journey, the woman’s race, and the singer’s untimely death than it does on the actual love he feels). Robbins sings of a specific lady that he loves, how he tried to walk away from her by putting his dreams of love on a hanging tree. With help, he returns to take those dreams back and walks away from the tree with his love. The song is actually very sweet, and the lyrics are moving.

This love song stands out because it seems like the topic of love is always in country music. There are only two extremely noticeable songs about love between two people, and I enjoy that.

There is so much more energy spent storytelling in other songs that are new and unlike anything I’ve ever paid attention to. I’m glad I’m hearing about new stories instead of the same tales that have been beaten to death in this genre.

Something that I think needs to be commended in this album is the backing vocals. Throughout the entire album, the three background vocalists tie everything together. While I understand that Robbins’ voice on its own is perfectly sufficient, Tompall & the Glaser Brothers really succeeded at giving the songs depth that wouldn’t have been there otherwise. Songs like “Billy the Kid” which feature Robbins’ alone are a lot more flat and perhaps even empty than songs that feature all four singers like “A Hundred and Sixty Acres” or “The Master’s Call”.

This is the album that has stuck out to me most from the 50’s, specifically because it doesn’t sound like the rest of them. I haven’t had anything against the other albums I’ve reviewed so far, but I admittedly was getting tired of listening to them. They all sounded so similar, and as much as I love those strings, something fresh is very welcome.

However, I’m surprised that this is the fresh sound I am welcome to. Whenever I’m asked about my taste in music, my answer is (like many other people I have asked) that I like every genre except for country music. I’ve had such an aversion to country music because I just feel like it just isn’t made for me. I know that there are common and repetitive themes in country music that I could easily get tired of since I’m always looking for something new. I won’t say that I am crazy for “Gunfighter Ballads and Trail Songs,” but the newness of the sound arrived at a nice time.

A commonality in all of the albums from the 1950’s so far is the nostalgia for a time I was clearly not alive for. I didn’t live in small town Iowa during The Music Man’s run on Broadway. I wasn’t around for the rise of social justice for black singers that began with people like Nat King Cole, and I wasn’t there when Christian music was still a staple in pop culture as it was when “Hymns” by Tennessee Ernie Ford came out. We all know that I wasn’t a cowboy like the man Marty Robbins sings about, but when I listen to this music I feel like I was there for it all. I think that is something special.

Listen to “Gunfighter Ballads and Trail Songs” by Marty Robbins on YouTube here or Spotify below.

Variety Show is a biweekly column that is in the midst of analyzing the best-selling albums from the 1950’s to the 1990’s. One of the top 10-20 albums from each decade will be reviewed, discussed and/or analyzed each week in chronological order. The column aims to draw cultural, musical, and other contextual connections between artists and albums over time, as well as go on a broad but refined journey. Next week we’ll be talking about “Marry Christmas” by Johnny Mathis, the fifth best-selling album from the 1950’s.