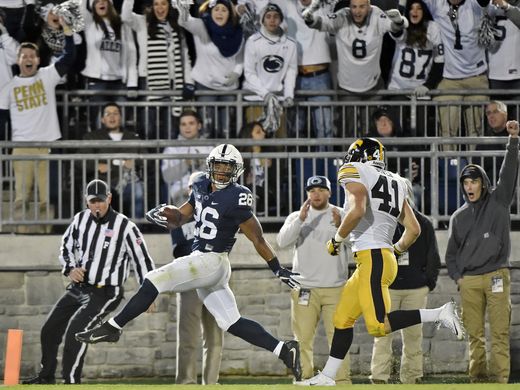 STATE COLLEGE, Pa— Well I had dibs on writing the article about the inspiring Iowa comeback but unfortunately I have to write this one instead.

I’ll start by sharing what Kirk Ferentz had to say after the game. “There wasn’t much good out there tonight,” said Ferentz. That seems like an understatement at this point.

The Iowa defense had a simple yet challenging task here tonight. Don’t let Saquon Barkley outside and limit the yards after contact. The Hawkeye defense failed miserably with both of these tasks Saturday night inside Beaver Stadium.

Barkley entered the game as the Big Ten’s leading rusher with 888 yards and 10 rushing touchdowns on just 147 carries. That’s an average of 6.0 yards per carry and if those stats weren’t good enough, he also has 14 receptions for 213 yards and a touchdown.

The Nittany Lion’s running back certainly reminded the Iowa fans of Stanford running back Christian McCaffrey’s dominant Rose Bowl performance back in January of this year. Barkley finished the day with 167 yards on 20 attempts. He exploded for a 57-yard touchdown early in the second quarter and never slowed down.

Iowa had an extra week to prepare for Barkely but it didn’t seem to help at all. The Hawkeyes failed to keep him inside and Barkely beat the Iowa on the outside time and time again. Barkely topped off his night with a 44-yard touchdown reception. He made the it easy on Trace Mcsorley, their quarterback, who only had to throw the ball 18 times all night.

It wasn’t comforting to hear what Desmond King had to say after the game. “We felt prepared. We had a great week of practice and really felt prepared for tonight,” said King. When he was asked what went wrong he responded with, “I don’t know. I honestly don’t know.” That’s not what you want to hear from you defensive star following an embarrassing loss.

Iowa clearly has defensive problems but one can only assume that a large part of the problem is the inability for the offense to stay on the field. The offense has put their defense in tough spots all year and that continued even after the bye week. Iowa’s was out of energy by the middle of the third quarter. They looked both physically and emotionally drained.

The line continues to provide no push and the secondary is weak aside from the 2015 Thrope Award winner, Desmond King. Even Penn State’s backup quarterback, Tommy Stevens made the Iowa defense look weak. He trounced over multiple Iowa defenders on his way to a 13-yard touchdown run in the fourth quarter.

Iowa will have to make quick adjustments before they host Michigan next Saturday in Kinnick Stadium. For a defense that had so much success just a year ago, it is both confusing and frustrating to realize that we will not be seeing the 2015 Iowa defense any time soon. Desmond King said that their preparation will remain the same heading into next week. Again, not exactly what you want to hear.

It’s without a question a frustrating time to be an Iowa fan but you should know what to expect by now. You can always dream and enjoy the ride on those crazy seasons like 2015 but you must also have endure the disappointing seasons like 2016.

Regardless of the outcome, Hawkeye fans will continue to travel thousands of miles to see their beloved team get blown out, but every now and then the Hawkeyes will surprise us all. Tonight was just not one of those nights.