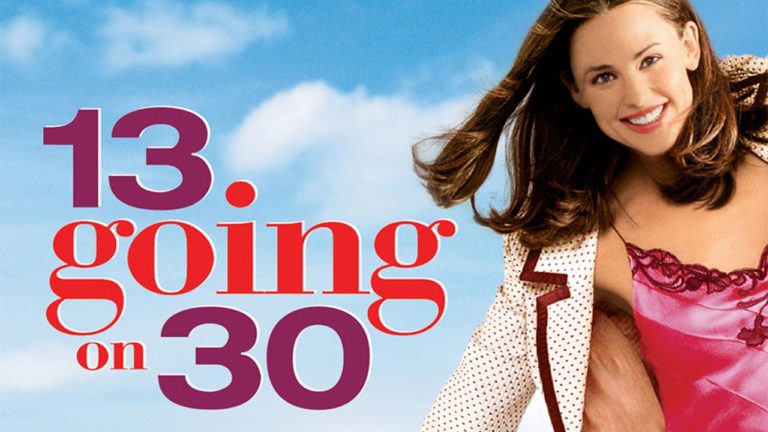 Welcome to the first addition of RomCom Rants, and article where I rant about the things I like and the things I don’t in romantic comedies.

13 Going on 30 is a RomCom classic if I’ve ever seen one. Made in 2004, this film stars Mark Ruffalo, Jennifer Garner, and Judy Greer. If you haven’t had the pleasure of seeing this movie, this brief summary is for you. Jenna Rink (whose older self is played by Jennifer Garner) is a thirteen-year-old girl who wants nothing more than to be a part of the popular crowd. The film starts off on the day of Jenna’s 13th birthday party. She has invited Tom-Tom (Judy Greer), the  most popular girl in their grade, and her best friend/next door neighbor, Matt (Mark Ruffalo).At the party, Matt gives Jenna a dream house sprinkled with magic dust.

Embarrassed that the “popular” kids will make fun of Matt’s heartfelt gift, Jenna puts it in her closet. When her party flops, Jenna locks herself in said closet and yells how she wants to be thirty, not thirteen. She chants, “Thirty, Flirty, and Thriving” as she slams her body into the shelf
that holds the dream house. The magic dust from the house falls on Jenna and the next thing she knows, she wakes up in New York City, 17 years later. The rest of the movie follows Jenna as she tries to figure out her new life.

I really love Jenna as a character. I think she is relatable. She worries about the same things I think every girl worries about at some point in their life. She worries that she isn’t pretty enough, so she overcompensates with make-up. She doesn’t think her body is filled out, so she stuffs her bra.

Personally, the first time I saw this movie I was in the third grade, struggling with these same issues. It was really good for me to see the struggles Jenna had because it showed me that you aren’t going to be the same

body type your whole life. Your body changes, but that doesn’t make you any less beautiful. Even though it appears that Jenna’s insecurities go away once she makes her transformation, I think they just take a new form, but even though she is insecure about aspects of herself, she never lets her confidence dwindle, which I think is a great thing for young women to see. Love yourself girl.

Her character is also believable because you can still see her thirteen-year-old innocence in her thirty-year-old self. She doesn’t wear clothes a 30-year-old in 2004 would normally wear. Her outfits are either bright and loud, like someone growing up in the eighties would wear, or modest and simple, like something a child would wear. This allows the viewer to sympathize with Jenna and empathize with her innocence.

Even though I love Jenna’s character, there are times where I am disappointed in her. For example.

When she first made her transformation, she found out thirty-year-old Jenna did not have the best morals. She was kissed by a man married to her coworker, after Jenna pushed him off her, she discovered she had been having a not so discrete affair with him. She was appalled by her behavior and left work appalled by herself. But when Matt kisses her, a soon-to-be-married man, she doesn’t question her behavior at all. She doesn’t even act like they did something wrong (compared to Matt, whose face obviously shows regret). This really shows how young and immature she truly is.

Even though Matt is obviously in love with Jenna, and has been since they were young, I appreciate the realistic ending. They do not end up together right away, he picks his fiancé because even though he knows he loves Jenna, he always knows that he made a promise to his fiance and needs to honor that promise.

It’s not until Jenna is able to travel back to her thirteenth birthday party and pick Matt over Tom Tom that they are able to have a happy ending. Even though it is sad in the moment when Matt reluctantly rejects Jenna, you are able to see how much they truly care about each other even though they can’t be together.

The thing I like the most about this movie is how fun it is. It has several choreographed dance numbers to classic 80s song like Thriller and Love is a Battlefield.

Jenna still does things that a thirteen-year-old would do like have sleepovers and eat chocolate chip pancakes with smiley-faces on them. It really gives this movie character that not every other RomCom has. The outfits are another thing I enjoyed in this movie. I know I previously discussed Jenna’s outfits when she’s older, but the outfits she wears, as well as the other characters, is totally eighties and totally fabulous.

Most of this film is centered around Jenna’s career. Jenna hires Matt to take pictures for WORK. Jenna gets in a fight with Lucy about WORK. Jenna is focused on WORK most of the film and her relationship with Matt directly stems off her passion for her WORK. If she didn’t have a job for him to do, they wouldn’t spend so much time together and eventually fallen for each other. Even though Jenna’s career is in the limelight most of the film, it is not addressed at all in the ending. I think Jenna should get the guy but still remain a badass Magazine Editor.

If you liked what you read, you can find 13 going on 30 on Netflix. Thanks for reading.