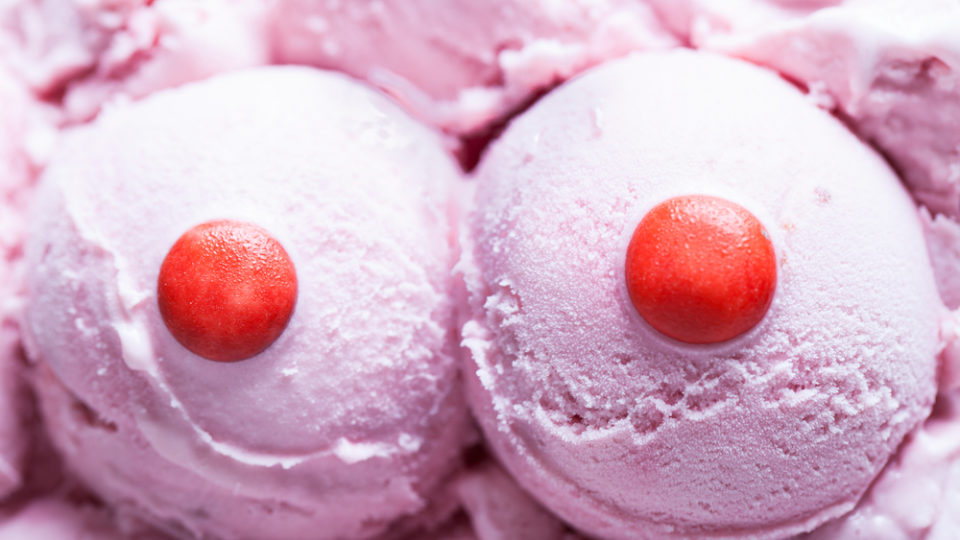 Recently nipple piercings have come into the limelight due to the fact that many celebs have gotten theirs done. I recently joined this exclusive group, so I thought I would answer some questions for the readers who are thinking about getting theirs done as well.

I got my nipples done at Release Body Modifications in Iowa City. When I wanted to get my nose ring changed out this summer, Release was where I went. I was really impressed with their service, so when I made the reckless decision to get my nipples pierced, Release was the obvious choice for me.

If you are thinking about going to them, know that they are pretty expensive. To get both of my nipples pierced, it was $175 with tip, and that was just with the standard grey bar. I know others who have been able to find other places to do it for less though, so don’t let the price hold you back.

(Release is located on Linn St., down from the record store and across from Black Angel tattoo parlor, if you are interested in giving them some business)

One thing I want to say before I start telling you about the piercing itself, is that if you want to get your nipples done, don’t be embarrassed about someone seeing you in all your glory. They are professionals and this is a job, you have nothing to be embarrassed about! You would be surprised by how many people get their nipples done. The guy who did mine said he probably gets more nipple piercings than any other. So you are not the only one who has sat there while half-naked.

sure he used the right size bar. This is just a tape measure device that is put around your nipple. It doesn’t hurt at all and really isn’t invasive considering it’s your breast. I honestly barely felt when he was even touching me.

After he picked out the right size bar, he sterilized everything in this big machine. Now this process took a long time, which I think was because he had to add more solution to the machine. I assume that this is not the norm, but just in case, I would make sure you don’t have anything to do afterwards when you go in. Once everything was clean and safe, which I know because he showed me a sterilization strip, I was instructed to take my shirt off and stand with my back to the wall.

The next five minutes or so was spent drawing on my nipples to ensure that the bar would be even and through my nipple, not my areola.

This was the first time that it started to be invasive. I personally wasn’t uncomfortable, but I know some might

be because he had to actually squeeze my nipples to make sure they were hard enough so his markings were accurate.

After he marked everything up, I laid down on the table and he got to work. Now I have heard stories of other places clamping the nipple while they pierce it, that was not how my piercer did it, but just so you are aware this might be the preferred way of whoever performs your piercing.

The first thing my guy did was put the back end of the bar in, now this hurt but don’t kid yourself like I did, it gets worse. Then he put the front of the bar into the other side of my nipple, now this is where it really started to hurt. Like really hurt. I can’t really describe the pain, but I can tell you that it was so intense that I felt it in my stomach. (My friend who I was holding on to for dear life even told me that she saw the inside of my stomach move.)

I honestly could have probably thrown up from the pain if I wasn’t so focused on looking tough. And it isn’t a fast pain, it takes about 30-45 seconds to get the bar all the way through the nipple which is a long time when you’re having a sharp rod shoved through one of the most sensitive parts of your body. After he shoved the bar completely through, he had to pinch the entry hole. This was almost just as bad as getting it shoved through in my opinion.

There are many people who say the second nipple is worse than the first. I personally didn’t experience this. I thought they both hurt equally bad, you just know what to expect for the second one. You do always have the option of only getting one nipple pierced though. This may affect the cost depending on where you go, so make sure you ask.

After everything was over, it didn’t hurt awfully bad. It did feel really awkward, probably because I’ve never experienced a rod through my boob, but once I got home the pain started to set in. I was exhausted. I had fully intended on participating in the Halloween festivities, but after my adrenaline wore down, I really couldn’t do anything except eat pizza and watch Smallville.

The day after, I was really sore, as you can imagine but the second day wasn’t so bad. It helped for me to wear a bra, it didn’t rub my piercings the wrong way like I expected, it almost helps to keep the piercings in one set place with a set fabric over them that didn’t move like a shirt would have. So your recovery might be better than mine if you wear a bra right after your appointment.

Regardless of the pain, I am really happy with the results. It is kind of fun to look at myself now, it is almost as if I have new boobs. So when you are laying on the table about to get impaled, remember it is worth it. Be brave, go get those nips pierced!

If you are interesting in more information of nipple piercings, such as the aftercare, just follow this link.