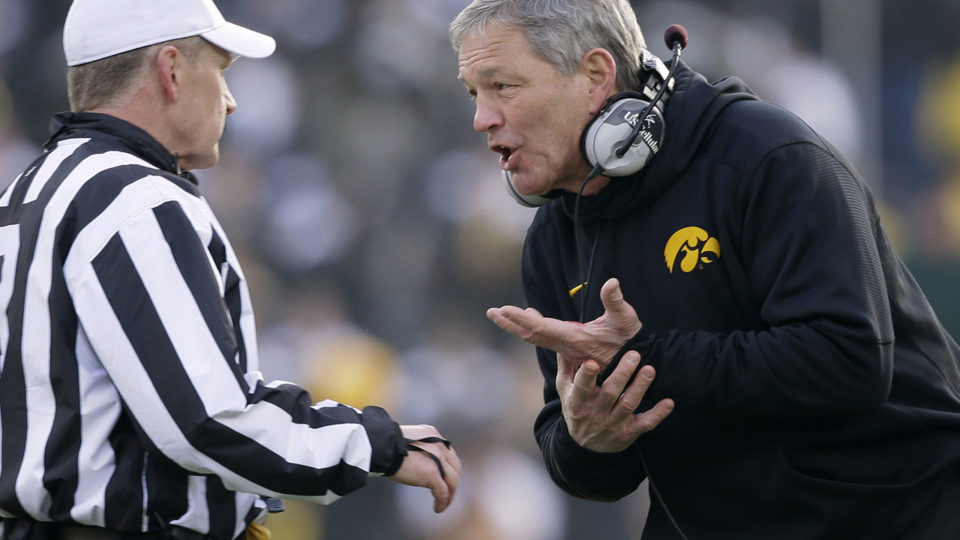 PISCATAWAY, N.J—Kirk Ferentz has had enough.

“One thing I have done for a long time is coach the offensive line,” Ferentz said. “They’ve altered the rules and I’m really befuddled as to why.”

The rule change tries to clarify what makes a clean “cut block,” a technique to strike an opponent low to get them off their feet. It says the block must come at the front of the defender.

The rule surfaced Saturday because the official believed Iowa’s Ike Boettger clipped his opponent from the side. The play happened away from the crease Daniels followed to the end zone.

Even in victory, Ferentz is sourly scratching his head on what negated Daniels’ run. It is the second time in two weeks a blocking infraction kept Iowa off the scoreboard. The rule’s murky nature means it can strike at any time, and once again regressed Iowa’s offense on Saturday.

“My concern with it is there’s four different weeks, four different interpretations on a rule,” Ferentz said. “We’ve created a set of rules that are really hard to understand. I don’t understand them.”

The Hawkeyes rushed for 193 yards in Saturday’s win, 26 coming on a touchdown run by Akrum Wadley that broke a 7-7 fourth quarter tie. Wadley ran left, and waited for left tackle Cole Croston to surge up field before knifing into the end zone.

“It’s always nice to have coach’s confidence in you to run to your side,” Croston said.

Despite the rulebook’s uncertainties, Iowa will not change how it opens running lanes. Regardless of what is penalized on the field, right guard Sean Welsh said the blueprint to blocking doesn’t waver.

“We try to stick to our brand. We don’t try to change anything up,” Welsh said.

The frustrated Ferentz knows Saturday’s story wasn’t written by one penalty. But, his simmering stance reached its boiling point and momentarily overwhelmed the positives of winning the game.

“We’ve made [blocking] a lot tougher than it has to be,” Ferentz said.