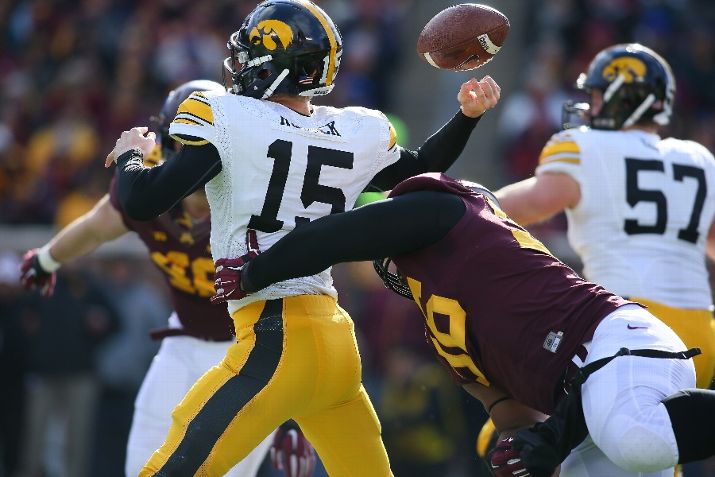 MINNEAPOLIS- The Minnesota Golden Gophers (7-2) controlled the ball on both sides of the field as they defeated the Iowa Hawkeyes (6-3) by the score of 51-14 to spoil the Hawkeyes hot streak.

The Minnesota offensive attack was lead by sophomore quarterback Mitch Leidner, who finished with 10 completions on 13 attempts for 138 yards and 4 touchdowns. He also led his team in rushing with 77 yards on 11 carries.

Leidner’s tight end Maxx Williams was clearly the go to guy when attacking through the air. Williams hauled in 5 receptions including 3 touchdowns. Iowa coach Kirk Ferentz said Williams is a “Heck of a player.”

The Hawkeyes dug their own hole turning the ball over 3 times in the first half. When Kirk Ferentz was asked about the loss he responded, “Our special teams did nothing to help us. They were bad.”

Iowa’s junior quarterback Jake Rudock struggled to find his rhythm after the first quarter. Rudock finished the afternoon with 10 completions on 19 attempts, and two turnovers.

When asked what changed after their first offensive drive, Rudock responded, “I can’t put a finger on it.”

The Iowa offense was able to scrap out only 205 net yards on the day. It was a different story for the Minnesota offense as they netted 429 total yards on the day. The Iowa defense struggled in the trenches allowing 291 yards on the ground. Coach Ferentz said, “They controlled both lines.”

This leaves the Hawkeyes in a tough position for the remainder of the 2014 season, as they would need to run the table to have a shot at the Big Ten Championship game. When asked if his team has mental toughness, Kirk Ferentz responded, “We’ll find out.”

Iowa will travel to Champaign, Illinois next week to take on a 4-5 Illini team who is coming off a bye. Iowa will finish the season out with two home games, as they will host both Wisconsin and Nebraska.

The Minnesota Golden Gophers will be tied with Wisconsin for second place in the Big Ten West heading into the final three games of the season, and will face three strong teams to finish.

The Gophers will host Ohio State next week and finish up on the road against Nebraska and Wisconsin. Despite the tough schedule ahead, the Gophers are in full control of their own destiny.