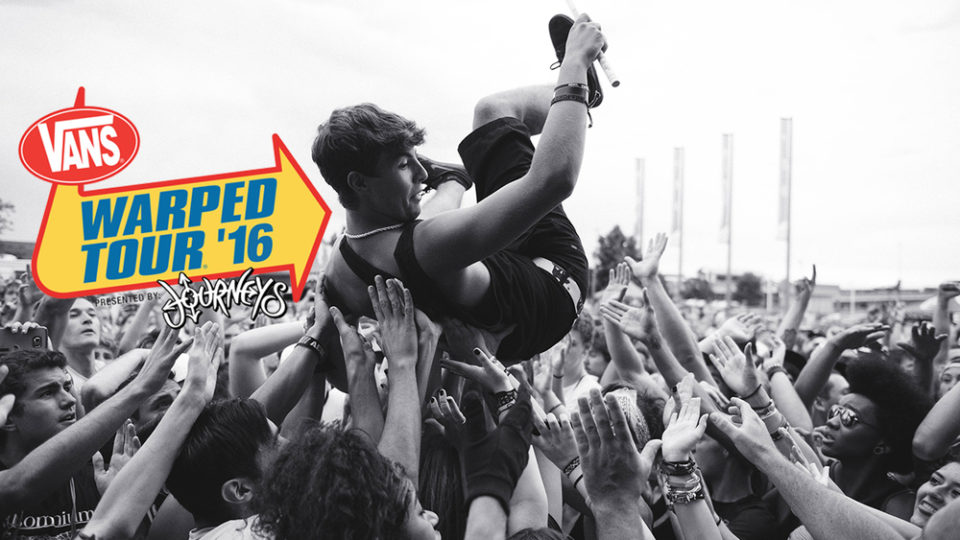 Ahh, summertime. Nothing feels more like summer to me than an ice cold lemonade, humid nights, and of course, Vans Warped Tour.

July 31st, 2016 marks my third time attending the Vans Warped Tour in Denver, Colorado. If you’ve never been to Warped Tour before, let me give you the low down. The tour arrives at your city the morning of and sets up stages, tents, porta-potties, etc. The line-up is different every day; bands normally don’t have a set time that they play every day. The schedule is not set in stone until the morning of. If you’re like me and you love to have things planned out, then Warped is going to stress you out. In previous years, I’ve missed seeing some bands live because there was another band playing at the same time. It’s always a shame, but it happens.

My best friend Ily and I arrived at the venue around 9 am (TIP: it’s always best to get there a couple hours early so you can get in line and just in case your favorite band is first to play). If you bring in three non-perishable food cans, then you get to skip the line and enter the venue before the normal general admission line (do this. Trust me. Just do it.) We finally got into the venue around 10:45, where we rushed over to the Full Sail tent to grab some wristbands to get into a meet and greet with one of our favorite bands, Real Friends. After finding the big inflatable schedule, we bought a $2 flyer with all of the set times on them (TIP: buy the flyer. It’s a lot easier than taking a crappy picture and not being able to see the set times).

Luckily, none of our bands overlapped, much to our liking considering the line-up this year was stacked with my favorite bands. The day for us started at 12:20 where we got to see State Champs at the main stage. I reviewed a State Champs concert before which you can read about here, and this time had the same vibes. This was my fourth time seeing State Champs live, and each time they just get better and better. Fans went crazy for this popular band, with many surfing through the crowd just to get close to the quintet. Starting with the song “Shape Up“, they powered through their set list, finishing up with their first single “Secrets” from their latest album Around The World And Back.

After State Champs performed, I was already exhausted from feebly lifting fans off of me and sending them forward. Ily and I sat on a grassy patch that sat near the Full Sail stage, where we got to hear Broadside, an up-and-coming pop punk band from Richmond, Virginia.

Around 1:15, we headed over to the Full Sail tent to wait in line for our Real Friends meet and greet. While waiting in line, we got to hear one of my favorite bands from middle school, 3OH!3. The duo, originating in Boulder, Colorado, played many iconic songs from their debut album Want and their most recent album Night Sports. Even though I haven’t listened to Want since middle school, I still knew all the words to the classics “Starstrukk“, “Don’t Trust Me“, “Chokechain“, and “Punkbitch.” It was a blast to listen to and middle school Jen was pretty thrilled.

We also got to briefly hear part of We The Kings’ set before heading off to meet Real Friends. Meeting Real Friends was one of the highlights of my day, considering they quickly became one of my favorite bands after seeing them at Warped Tour in 2014. The guys were all so nice, even though we briefly chatted. Earlier in the day, we got to talk to bassist Kyle Fasel at their merch tent more in depth. Check out my review of their last album here.

Ily and I rushed to the main stage to catch another one of our favorite pop punk bands, The Story So Far. The Story So Far leans more on the harder and angsty side of pop punk, making their sound unique and relatable. Adrenaline pumped through my veins as we jumped and yelled the lyrics back at the band. Their set list included “All Wrong“, “The Glass“, “Nerve“, “Quicksand“, “Empty Space“, “Heavy Gloom“, “Things I Can’t Change“, and “Roam.”

It was around 3:00 pm when Ily and I sat down to eat again. After munching on light snacks (TIP: bring a lot of snacks because the food at Warped is expensive and the lines are long) we headed back to the main stage to catch Issues, a metalcore band from Atlanta, power through their set with hardcore energy that pumped fans up. They played a couple songs off their latest release Headspace, as well as some older fan favorites such as “Mad At Myself”.

Once Issues wrapped up, we headed towards Knuckle Puck’s tent to meet the band. Each member was so friendly, shaking my hand and introducing themselves. I briefly mentioned seeing them in Iowa City last October, which one replied saying that Gabe’s was one of their favorite venues. After taking a quick selfie, we headed over to sit under a tent. On our way there, we spotted lead singer Derek DisCanio of State Champs at their tent, so we popped over to get our t-shirts signed. This was my third time meeting Derek and he was just as humble as he was the first time we met at Warped Tour 2014.

Ily and I filled up our water bottles and munched on some goldfish before we jumped in the crowd to jam out to the latter half of Sleeping With Siren’s set. The crowd was packed as fans watched from all across the parking lot. The girly screams of the crowd reflected Kellin Quinn’s uniquely high pitched voice perfectly as they belted all of the lyrics back. Their set was a nice mash-up of old and new songs, which was pleasing to fans no matter what Sleeping With Sirens era they liked most.

After Sleeping With Sirens, we pushed our way to the front of the crowd so that we could be close for when Real Friends played. One stage over, we were able to hear Sum 41, an iconic 2000’s pop punk band. Towards the end of their set, they played their cult classics “In Too Deep”, “Still Waiting”, and “Fat Lip” which got almost the entire arena parking lot to chime in.

Real Friends took the stage, opening up with the fan-favorite “Late Nights in My Car” which got the crowd energized right off the bat. Old songs faded into new songs, highlighting the slight change in style but still reminiscent of their previous EP’s. Bassist Kyle Fasel occasionally jumped on the riser, shouting lyrics and waving his hands up and down, getting the crowd to jump along with him. Real Friends finished up with “Loose Ends”, a single from their first full-length album Maybe This Place is the Same, and We’re Just Changing.

Ily and I then pushed our way out of the crowd to run to the other side of the venue to catch Knuckle Puck at the Poseidon stage. We got there right in time as they were opening with “Disdain” off of their latest record Copacetic. I was surprised at how much smaller the crowd felt, considering they’re a huge up-and-coming band that’s gained a lot of popularity since they were on last years’ Warped Tour. Lead singer Joe Taylor jumped around the stage passionately, occasionally screaming lyrics and holding the microphone out to the crowd. They played some of my favorite songs, such as “Untitled“, “No Good“, and “Pretense“. There was not a still person in the crowd during their set, making it one of my favorites of the day.

As Knuckle Puck packed their stuff up, a band called Waterparks opened up their set at the Cyclops stage, where a small group of fans gathered around to jam out. Ily and I were able to sit comfortably a little ways back and watch the band. They made for an enjoyable listen while we passed time. Once they wrapped up, we turned our heads back to the Poseidon stage where Roam, a British pop punk band, played catchy songs to a slightly larger audience.

Ily and I then headed back over towards the main stages and sat again, this time listening to Arizona locals The Summer Set. They played a few songs I knew, my favorites being “Boomerang” and “Lightning in a Bottle”.

We decided to go stand in the crowd for the long wait to see Mayday Parade. Four Year Strong was playing, a band described as pop punk/melodic hardcore. Fans formed what is called a “wall of death”, or extreme moshing. While we were safe on the side, it was fun to watch fans get passionate about the music and run about the pit.

While waiting in the crowd for Mayday, one stage over New Found Glory, formed in 1997, made for an enjoyable listen. They ended with their classic “My Friends Over You”, which got everybody in the parking lot to hum and sing along.

Finally, the moment we were all waiting for. Mayday Parade closed out Warped Tour by opening with fan-favorite “Jersey”.

The crowd went crazy for the band with nobody being able to push their way to the front. That left them with one option: crowd surfing. While I’m all for crowd surfing, it gets tiring after a while. Fans began surfing from three different spots in the back, all leading to the center of the stage with 4 or 5 people surfing at a time, all snapchatting their adventure. It got to be overwhelming, and we found ourselves looking back in fear that our necks were going to be snapped rather than looking forward and enjoying the band that we had waited all day to see. At the end of the day though, we weren’t gonna let a few crowd surfers ruin our day.

While many of us have been at the venue going on 11 hours, the energy was just as copious as it was when the day started. Fans jammed out to crowd-favorite songs, making it an enjoyable listen for any casual Mayday fan. Mayday ended with another fan favorite “Jamie All Over”. Once the guitars faded out, the crowd chanted for an encore. Ily and I decided we were pooped and that the only thing we wanted was a hot shower and our beds.

To say the least, Warped Tour 2016 was by far the best Warped experience I’ve had thus far. I highly recommend making the drive out of Iowa to experience Warped, as this is a day that I surely will never forget!