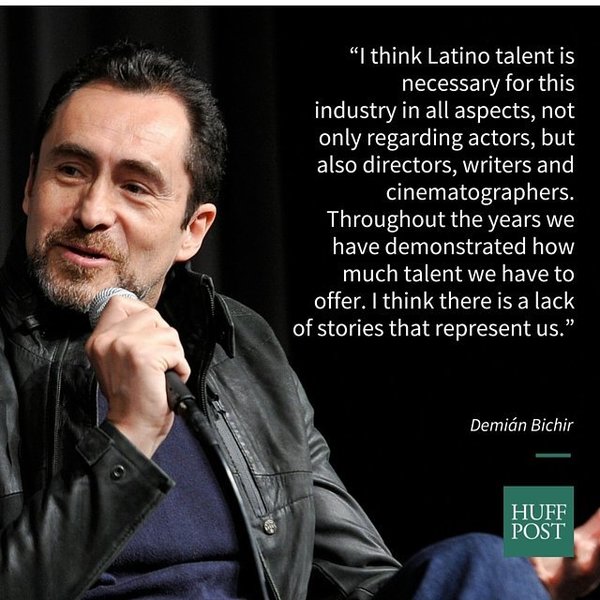 Due to the lack of Latinos who have made been recognized for their talent I want to use this article to acknowledge the Latino actors, actresses, directors, composers, and cinematographers who have won an Academy Award, a Golden Globe, a Primetime Emmy or all three.

The honor of being the first Hispanic actor to win an Academy Award belongs to Puerto Rican Jose Ferrer. He also was the first Hispanic actor to be nominated more than once. He won Best Actor in a Leading role in 1950 for Cyrano de Bergerac.  Mexican-American Actor Anthony Quinn won Best Actor in a Supporting Role in 1952 for Viva Zapata! thus becoming the first Mexican actor to win an Oscar. He also won this category in 1956 for “Lust for Life“.

Javier Bardem, a Spanish actor, won an Oscar in 2008 for Best Supporting Actor in the film No Country for Old Men. Another Puerto Rican to win an Oscar was Benicio Del Toro who won Best Actor in a Supporting Role in 2000 for the film Traffic.

Emile Kuri, who was born in Mexico, was nominated for Best Art Direction eight times and won twice. He won for The Heiress (1949) and for 20,000 Leagues Under the Sea (1954). In 1995, Argentine painter and film set designer Eugenio Zanetti won Best Art Direction for Restoration.

Emmanuel Lubezki is a Mexican cinematographer who has been nominated in the category of Best Cinematography a total of eight times. He won for Gravity in 2014, Birdman in 2015, and this year, 2016, he won for the The Revenant.  Another Mexican to win the award for Best Cinematography is Guillermo Navarro who won in 2006 for Pan’s Labyrinth.

Alejandro Gonzalez Inarritu, a Mexican Director, has won Best Director a total of two times, the first in 2015 for Birdman and the second in 2016 for The Revenant.  He became the third director to win this category back to back and the first Latino to do so.  Alfonso Cuaron, a Mexican director, won both the Best Director and Best Film Editing awards for Gravity in 2014 after having been nominated in the categories of Best Film Editing, Best Original Screenplay, and Best Adapted Screenplay.

For a look at Latino/as who have been nominated for an Academy Award click here.

Edward James Olmos, a Mexican actor, has won two Golden Globes. The first in 1986 in the category of Best Performance by an Actor in a Supporting Role in a Series, Miniseries or Motion Picture Made for Television for his role in Miami Vice and he won the same award again in 1995 for his role in The Burning Season.

Pedro Almodovar, a Spanish screenwriter, producer, and director, has won two Golden Globes in the Best Foreign Language Film category. One in 1999 for All About My Mother and another in 2002 for Talk to Her. Benicio Del Toro won a Golden Globe for Best Supporting Actor for his role in Traffic (the film which also earned him an Oscar.)

In 2007, America Ferrera took home the Globe for Best Performance by an Actress in a TV Series for her role as Betty in Ugly Betty. Continuing with Latino winners at the 2007 Golden Globes, Javier Bardem won Best Supporting Actor for his role in  No Country for Old Men. (Which also earned him an Oscar.)

Last year, in 2015, after eight years of no Latina winning the category of Best Actress in a Television Series or Comedy, Gina Rodriguez took home the Globe for her role as Jane in Jane the Virgin. (A show that has good representations of Latinos.)

Counting up all the Latinos and Latinas only a total of 14 have won a Golden Globe.

The talented Rita Moreno has two Emmy awards to her name. She won the Individual Performance – Variety Or Music Program award in 1977 for The Muppet Show and in 1978 she won Outstanding Lead Actress – Single Appearance in a Drama or Comedy Series for The Rockford Files.

Jimmy Smits has been nominated for an Emmy 12 times but has only won once. He won Outstanding Supporting Actor in a Drama Series for his role in L.A. Law.  Colombian actor John Leguizamo won the award for Individual Performance Variety or Music Program for his one-man show Freak in 1999.

In total, there are 7 Latinos who have won a Primetime Emmy.

Combining the numbers results in only 42 Latinos  who have won either an Academy Award, a Golden Globe, an Emmy or all three. Comparing that to a total of 117 (30 Golden Globes, 31 Oscars, 56 Emmys) people who identify as either African American or Black who have won one, two, or all three of these awards. When researching the number of Asians and Pacific Islanders that have won these acting awards, I couldn’t find any information for the Golden Globes or the Emmys but a total of 38 have won Academy Awards. The majority of all the awards won by people of color are typically behind the scenes.

If we add everything up means that 241 awards out of 6,587 have gone to people of color. People of color aren’t winning acting awards because for some reason Hollywood still believes that the white man should portray a person of color. Just take a look at this article which describes multiple times in which white actors were cast as a different race.

Latinos, African-Americans, Asians, and other minority groups need opportunities to portray intellectuals instead of criminals and maybe white actors shouldn’t accept roles meant for people of color. If we aren’t given the chance, how will we ever succeed?

Check out the Huffington post’s article 16 Times Latinos Were Honest Hollywood’s Lack of Diversity to get some perspectives from talented Latinos.

This is the seventh article of the column titled “Living in White America.” Every month there will be a new article discussing how one immigrant group, Hispanics/Latinos, live in America. This column will have articles dealing with anything and everything that concerns Hispanics/Latinos, this could include political and social talks. Some articles may discuss a culture of a different Hispanic/Latino group and interviews with a variety of Hispanics /Latinos will be added as well as interviews with non-Hispanics asking for their opinion. Discrimination against Hispanics and Latinos has gone on long enough and now it’s time people get a look into a world they dislike so much.