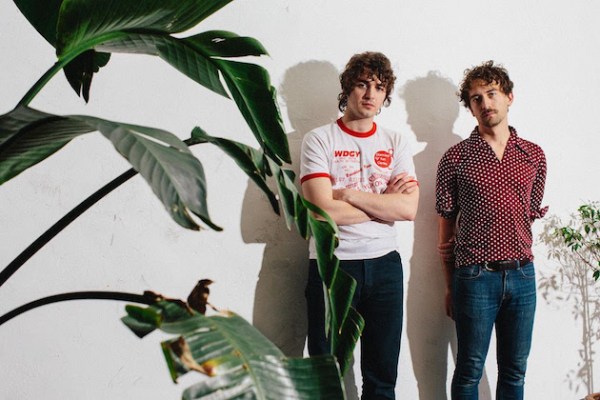 Night Moves is made up of John Pelant and Micky Alfano. Both are young in age, but wise in talent. The two band mates met in high school and continued on after. It was not until 2009 that Night Moves formed. Since then, they have created five albums, including Pennied Days.

Carl Sagan: This song is very easy to listen to. It has a really good melody; not too fast, not too slow. And the mix of the instruments slightly reminds me of something that would be played in the seventies. The lyrics are clear and easy to make out, which is really important to me. The vocals are why you want to listen to this song, though. It has a lot going for it, but the vocals are amazing. The way the singer travels between his chest voice to falsetto is utterly impressive.

Denis, Don’t Wanna See you Cry: This song starts off with the instruments sounding like someone is screaming, which I thought was fitting based on the title. This whiny sound is kept through out the piece. It gives it a techno feel, while maintaining it’s Indie rock identity. This piece has long instrumental solos, which I don’t particularly care for. And when the vocals do come back in, they just repeat the same verse over and over again. Granted, it is a good verse, but I would have liked the song more if it had more substance.

Leave Your Light On: This song has more twang than the others. The first time I heard it, I imagined it being sang in a run down bar with only old men drinking their beer to listen. It just has that far away sound that you find in a live performance. The vocals are crazy good. He is able to travel through his range without any hesitation. The music aspect of this song is really great, but I had a hard time understand what it was about. Which of course isn’t always necessary, but I do enjoy that aspect. I think if I could really understand what was going on, it would have really sold me on the song.

Border On Border: This song starts off with a great and poppy electric guitar solo. It really got me pumped up for what was going to come next. The vocals are a lot more whiny in this song compared to the others, which some artists can’t pull off, but this band really makes it work. My favorite part in this piece was when the instruments died down so the vocals could really stand out, then a few seconds later, the same poppy electric guitar came back in. It gave me goosebumps.

Kind Luck: This song reminded me of something behind it’s time. The vocals reminded me of Bruce Springsteen’s “Born in the USA,” because they both have that raspy feel to it at the beginning. This song was one of my favorites from the album, mostly because the lyrics are so crispy and easy to make out. Everything about this song really works, whether it is the clear lyrics, great  vocals, or the subtle acoustic guitar in the background.

Hiding in the Melody: This song features the high falsettos as well. Seriously so good. I can’t get over how well he changes his voice. There is even a part in the song where he creates a full but whiny sound. I think this song is my favorite on the album, mostly because of the insanely impressive vocals, but also because the melody keeps you on your toes and the lyrics are touchingly poetic. This song is by far the longest in the album, but I promise you will enjoy all seven minutes of it.

Staurolite Stroll: The beginning of this song really reminded me of the song by Maxine Nightingale, Right Back Where We Started From. Even the vocals kind of take you back in time. Really a great song. Understated yet excellent.

Alabama: I love the way this song starts, it is all high, airy falsetto and it is so well done. I can’t even put into words how good the vocals are in this song. It goes from high falsetto to something that sounds like Elton John to something entirely different. Seriously, everything about this song is utterly beautiful. Even the lyrics are touchingly insightful. If you are to check out any song on this album, check out this one. You won’t regret it, I promise.

Only To Live in your Memories: I loved this song as well. It had the airy vocals, like some of the songs at the beginning of the album, but the lyrics are so much more thought provoking and clear in this song. I can see why they saved this for last, because it truly made me feel something. “And I held on cause I feel love.”

This album was great. I may not listen to every song everyday, mostly because I like to sing along with what I am listening to and I had a hard time making out every lyric in some of the songs, but it definitely made me feel something, which is all you can ask for in an album. There were a few that I down right loved, but all of the songs on the album had something great about them, whether it be the impressive vocals or the fun instruments. If you like what you hear or just want to know more about the band you can follow them on Facebook and Spotify. If you want to see them in concert, their tour dates are on their website.