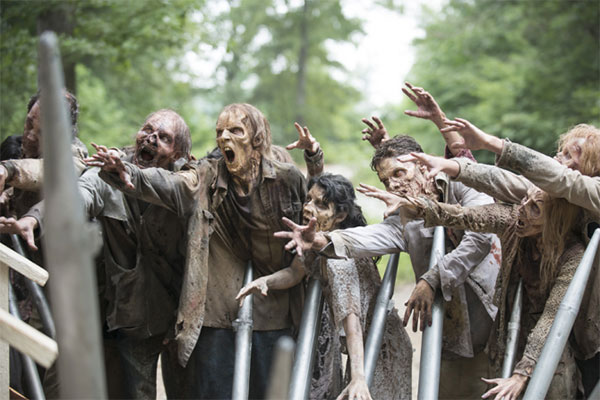 Joe stares at herself in disgust in the grungy mirror hanging in the abandoned rest stop bathroom.“What have I become?” Joe thinks to herself. “What if that body I just mangled was Benny or Bella? How could I live with myself if I hurt anyone I cared about?” Joe wipes away the tears that begin to flow down her undead cheek. Zombies aren’t suppose to cry.

Joe’s father waits patiently outside the rest stop. Once Joe comes out of the bathroom, they begin to walk. Joe doesn’t know where they are going and when she asks her father, he just moans and continues to walk.

The sun cakes the blood of Joe’s first kill onto her skin, making Joe feel even dirtier than she had before. The gravel road they had been walking on turns to pavement making it easier for her to walk. She doesn’t feel tired and she isn’t hungry, even though they have been walking for a good twelve hours, but her mouth yearns for the taste of human flesh. She tries to think about something else, in hopes it will distract herself, but everything moves too slow in her now mushy brain.

As the sun sets, two black vans pull up beside her and her father. Before she can realize what is happening, a barbed wire net covers her face making movement impossible. She feels something sharp stab her neck. Her neck slowly goes numb, followed by her arms, then her chest, then the rest of her body. She falls unconscious right as she sees her father being stabbed just as she was.

Joe wakes up just like the morning before, laying on a cold cement floor. She still is unable to feel any part of her body except her head. Her head is pounding as hard as a butcher pounding a hunk of meat. She moans in displeasure and fights to move her body. After thirty minutes of squirming, she is able to feel her arms. She crawls aimlessly around the dark room, trying to find some leverage. When she finds the wall, she digs her nails into it and pushes herself to her feet. Once she gets up, a door swings open. Light floods in. Joe is so startled that she falls, back first, onto the cement floor. She feels the barbed wire net cover her face again. The net is used to pull her across the floor. The wire’s sharp edges dig into Joe’s face, making her bleed.

Joe is pulled to her feet. When her eyes adjust to the bright sun, she sees Benny standing a mere fifteen feet away. She suddenly remembers the burning in her throat. The craving of human flesh. Before she can stop herself, she charges at Benny. Arms flailing, mouth drooling, mind racing. Benny pulls out a gun and aims it at her forehead. He looks away and pulls the trigger. The bullet pierces Joe right between the eyes. She falls to the ground, the burning in her throat gone.