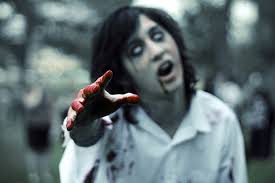 Joe wakes up with a massive headache. She can feel cold cement underneath her. Nothing but darkness covers her. Her hair is thick with blood that has leaked out of the wound on her neck. She tries to push herself up, but is too weak so she falls face first into the cement. Joe rolls over as she hears a door open and is blinded by a rush of light. Joe covers her eyes and moans.

The light makes her feel like someone is stabbing her brain with needles. She feels hands grab her by her tattered shirt and lift her to her feet. When her eyes finally adjust to the brightness, she see’s her father holding her up. Suddenly she remembers what happened. Without even thinking about it, she throws her hands around him. Unlike before, he embraces her without ripping out her flesh.

She follows her dad to the door. Everything seems to be moving slowly around her. Even her thoughts are moving slowly. He leads her into a ransacked rest stop at the end of the street. Other zombies are gathered there feeding on the defenseless store clerk. Joe sees the flesh being ripped off the man’s face and her mouth begins to water. Before she knows it, she has pounced on top of the man, shoving the others out of her way.

She sinks her teeth into his shoulder and feels the thick blood flow into her mouth. The taste speeds everything up. Suddenly it is as if she was still human. She feels a rush of adrenaline flow through her body, but unfortunately, it fades quickly.

Once she is finished, she gets up and walks back over to her father. She catches her reflection in the a mirror that is placed above the door. Her black hair is in untamed knots all over her head. Her skin, once the color of olives, now looks like the color of slushy snow on the highway. Her body is covered in dried blood and dirt. She is hunched over so much that you can make out her spine. Her clothes are tattered and worn. Her shirt, ripped at the neckline, exposing her milky shoulder. Her arms are turned in a way that makes her look like she doesn’t have any joints.  Then she sees her eyes, the once beautiful, green gems are now dark and foggy. When she used to look into them, she would see a sort of gleam or sparkle, now all she sees is emptiness.

Check out the first and second part of Joe’s adventure.