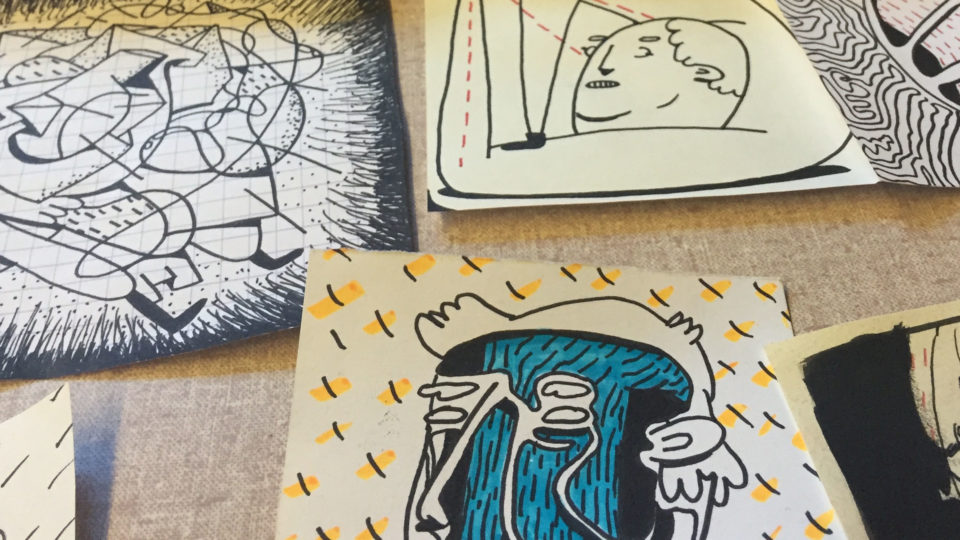 Iowa City Expo for Comics & Real Eclectic Alt Media (or ICE CREAM) took place at Public Space One in the Wesley Student Center on the penultimate day of Mission Creek Festival. The event focuses on small and/or local artists that create their own alternative art. I was super excited to see all of the different kinds of mediums and genres of art that would be represented at the event since I am currently studying art at the university. It is also always interesting to see artists talking and collaborating with each other, so that was something else I was excited to see. I had also been looking at the concept of zines for the past few weeks and thought that they were very interesting, so seeing a variety of them in person seemed to be a dream.

Public Space One looked completely different than it did the one other time I’d ever been there (for a Paperback Rhino show.) There were no rows of chairs, instead a maze of fold-out tables, each with a completely different style of art on top of them. There was a crowd that was large enough to make me feel a little uncomfortable, but small enough that once you found a place to stand, you wouldn’t be bothered. Around thirty artists were there, and I was satisfied with almost all of their work.

First, I stopped at the Work Press & Publication table, which was right next to the door.  According to the publication’s website, Work Press & Publication was created in 2013 “to provide a physical and virtual genesis, storehouse, and marketplace for artistic publications and images.” I really liked the logo of Work Press & Publications, since the type seems to have a vintage feel to it. In fact, most of the type that was used for covers of zines, newspapers, or books that were at the table drew me in because they looked like something that you could see at a circus or on an advertisement  in the 30’s or 40’s. They all had that kind of simple typography with simple colors, especially yellow and red. I liked the look of the work that was set out. Something I found interesting was the Work Press & Publications  Sunday Morning Comics, a small-run newsprint publication that collects comics from artists around the world. Collaboration is essential for any art-based company and the Comics seem like a great way to provide a source of community for illustrators and comic artists.

Next was Jonathan Sims, the creator of a comic book called Floating Bunnyhead. On the back of his business cards, Sims printed a fun description of the comic book: Floating Bunnyhead is an awesome comic book. I mean, we got Floating Bunnyhead (the disembodied rabbit noggin), Armless Bear (the massively magenta ursine amputee), Slicey (the piping hot piece of pizza), and Raptoro (the Saturday morning cartoon pinata-sauras), and they all are saving the world in exciting encounters with villains, jerks, robots, buttheads, aliens, ancient evils, and even more buttheads! I think that Jonathan Sims had the most overt creativity in the building, and the style of his artwork showed it. Some of it was crude, but that was the point. He also has an Instagram, which is a great way to keep tabs on what an artist is doing (and sometimes he posts pictures of a stunning adorable black cat).

After I snaked around a few more rows of tables, I saw a man sketching a really cool piece that looked like a city street. He turned out to be Will Santino and based on the work that was laid out on his table he was a versatile artist. He had a stack of children’s books named My Week about a young boy’s summer that he wrote and illustrated. I would recommend My Week for any kid that wants to have a gigantic imagination. The different pages of the book each had their own style but are still clearly illustrated by the same artist. There were also a variety of prints that looked like they were all different mediums, from paintings to digital to drawings and sketches. The versatility of Will Santino was really interesting.

The next artist that I saw was probably my personal favorite of the artists at the expo. Brady Wulf had his entire table full of tiny sketches and drawings, none of them more than a few inches across. Most sketches were only black ink on paper, but a few of them had some color. There were a few stacks of an (as Wulf describes on his Tumblr page) “comic/art/future propaganda pamphlet.” One big painting was set in the middle of the small drawings. There was also a small sign on the front edge of the table that said Wulf would attempt to draw anything someone were to ask for and would only ask one dollar for it. I really like that he was willing to draw whatever a person wanted, and was confident enough to offer. Being able to think quickly and sketch something on command is something that I admire, especially when that artist has their own distinct style. Wulf’s cartoony, yet somehow-realistic style was really interesting to me. I will definitely keep and eye on his work.

As I neared the end of the table maze, I talked to an artist named Kate McDonough. She has a very simple illustration style, which I like sometimes. She had a lot of work that revolved around self-confidence and self-love, and I think that is very important.When I talked to her as I was taking photos of her illustrations, she told me that she draws a lot of inspiration from social anxiety, and trying to make the awkward things in life seem cute and funny. She also has a Tumblr, where she posts photos of her art and answers questions that people send in for her. I feel like her drawing style is one that is popular, and could easily be found on a Tumblr feed, but nonetheless is still a style that I enjoy looking at when I don’t want to look at something too busy or intense.

The last artist that I talked to wasn’t someone I was expecting to see at all, but I recognized her immediately. Her name is Megan Hindman, and she just happened to be the only person that I talked to in my last African-American Art History class from last semester. It was really refreshing to see her, not only because her artwork is awesome, but also because it made my dream of ending up with my work at one of these things ten times more real. Someone who was in one of my required art courses is in a show that I’m attending. The event instantly became ten times more personal and more realistic. It validated my hopes of one day becoming an artist.

Overall, I think this event rejuvenated my passion for what I do.  It also made me extremely jealous of people who had money in their bank accounts, because the art was so cheap (and so amazing) but I am perpetually broke. There were so many things for sale: drawings, paintings, buttons, stickers, cards, prints, etc. It was amazing to see people be successful with exactly what I want to do in the future, even more so because art majors are continuously told that what they’re doing will never bring them success. Some may say that the basement of a student center isn’t “success,” but if these artists had this kind of effect on me, I would call them successful in a heartbeat. I hope that Mission Creek makes this event annual and that there can be more events like this in Iowa City more often. I think that it fits in perfectly with Iowa City’s perfectly artistic culture.

To see more work from the 30+ artists that attended ICE CREAM, see most of their websites here.