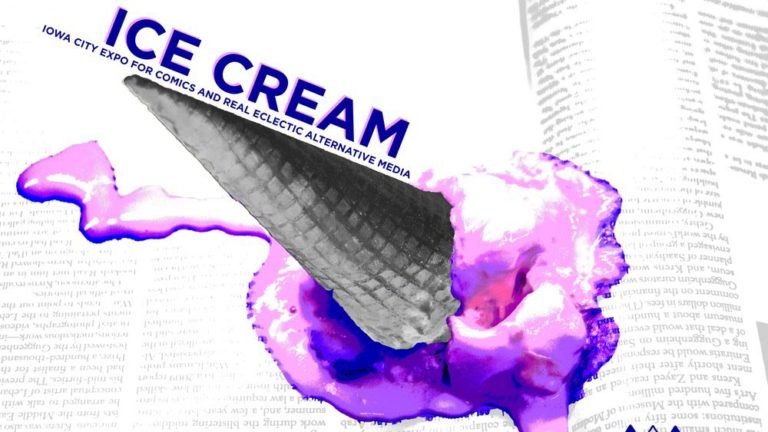 I also went to and reviewed ICE CREAM last year when Mission Creek took place and instantly volunteered for a second year because I loved it so much. I have a huge affinity for art, and love seeing and learning more about what artists are doing locally. ICE CREAM is one of many expos that easily allow us to see a huge selection of art from people who are doing their work in or around Iowa.

ICE CREAM was already so much better this year based on the expo taking up two floors of Public Space One as opposed to just the basement. When I went last year, there were so many booths in one room that it was hard to stay still and look at one specific artist’s work. Having more artists spread across two different floors made it so much easier to admire and spend more time at each individual table.

(The artists I’m going to talk about are just a few of the amazing and great and fantastic people that were at this event.)

Initially, I found it odd that Ian Huebert had only a few items on his table when so many people around him had a plethora of work sitting out on theirs. Then, as I started talking with him, he told me that he bound, wrote, printed, and illustrated everything on his own. This if a lot of work for one single person to do, and I admire him for being able to do it all on his own and still get such an amazing product out of it. In this case, owning some of Huebert’s work is meaningful just for all of the time and hard work was put into it.

Next, I stopped at Ms. Harkness‘ booth to look at her comics. She’s the type of lady that you can tell from afar is a gigantic badass. As I started flipping through her comics, I guess she could tell that I was a gigantic cat lady. She showed me the comic she drew inspired by her cat, Dutchess, called Floor Troll. I saw the beautiful illustrations of her sassy (and/or semi-demonic) cat and knew that there was something special about it.

She also had comics about a wrestling belt that a one night stand left at her house, giving her the fuel to pretend she was a wrestling champion for a month. She also had a comic about trying to have sex at the airport. Ms. Harkness is someone who doesn’t have any shame in anything and decides to make art out of hilarious situations. I admire her for that.

Next, I visited probably my favorite booth at ICE CREAM, Vice Versa Press. The lady that was showing her art, Julia Arredondo, was probably one of the nicest people I have ever met. When I told her that I was at the expo to write for the campus radio station and that my friend and I had just finished a show half an hour prior, she was so welcoming and wanted to talk with us about all of the different shows she listens to. She found something to connect with me, and that was really neat.

I also, of course, found the art super cool. There was one piece specifically called Empty Bedrooms that was simple but also extremely moving. It is, as the title suggests, a series of illustrations of Arredondo’s empty bedrooms from her living spaces between 2005-2012 compiled into a zine. There’s something haunted and nostalgic about looking at her drawings, even though I had obviously no idea what the stories behind them were. I could help but leave with a copy of it.

As I walked over to Epi Climate‘s table, I realized that the guy behind the table, Matthew, was almost done drawing my best friend who was scanning all of the tables with me. I, personally, think that the best thing for an artist to do as they show their art is make new art that people around them can see their process and get to know their style a little bit better. He also let him keep the caricature he made and drew me as well.

His art revolves around nature and preserving the Earth, which is something that is so important to talk about and spread awareness for, especially right now. I also loved his use of green and blue as his two major colors, since it’s an easy way to keep people’s minds thinking about the planet.

Lastly, I visited a pal that I met at last year’s ICE CREAM event. Brady Wülf’s art has always stuck out to me because it is such a distinctive style. When I saw his work last year, he definitely had an impact on my own style and helped me see that it’s definitely ok to not be a have hyperrealistic style. I will always be a huge fan on his work for that.

Check out this list of all of these delightful and nice people’s Instagrams so that we can all give them some love!!!