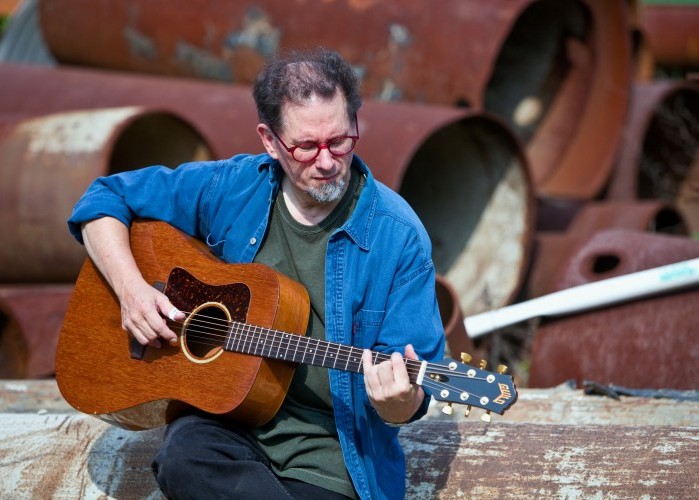 Trumpet Blossom was a bit farther away from the other Mission Creek venues, which was also apparent by the crowd present. Of the several dozen audience members, most were middle-aged couples or groups of chill guys in their twenties. The calm, candlelit vegan cafe was a lovely change of pace from my regular spots on or near campus. The stage was rustic and very appropriate for the event.

Most of the tables were enjoying dinner when I arrived, so I decided to order some nachos; they were awesome. As a vegetarian, it was lovely having a wide selection of menu items for once! The organic, vegan nachos were delightfully flavorful and fresh. I also appreciated the mason jars used for water glasses. No surprise that Trumpet Blossom was featured for one of the Mission Creek dinners!

Paul Metzger took the stage and played a 12-string banjo for about 45 minutes–without stopping. He used many of his own creative techniques to pull interesting sounds out of the instrument. The timbre he created was often similar to a sitar, especially when he used a violin bow.

Since the set was straight music on a simple, intimate stage, the focus was entirely on the music. Metzger had raw, innovative talent; I’ve never seen anything like his banjo technique. During extremely dissonant notes, he would often shake his head quickly back and forth so that his beard would dance with the music. It was easy to tell how passionate he was in his free-form playing.

Since it was such a serious, focused performance, there was not a word spoken during his entire set. The only other sounds were occasional clinks from the bar or rustling of chairs. Overall, people were intently focused on Metzger’s rapid fingers. He thanked the audience with a quick word, and left the stage.

After a short intermission (where I could finish my crunchy snack with disrupting my neighbors), Glenn Jones took his place center-stage. Right off the bat he showed his incredible technique on acoustic guitar. As someone in the beginning stages of learning guitar, I was completely blown away.

When Jones switched to banjo, he explained that he had been scared of Appalachian-style playing rules for so long that he had not attempted banjo; after watching Paul Metzger awhile back, he decided to get a banjo and “do whatever the hell [he] wanted with it.”

However, he also remarked that banjo is not a well-loved instrument. While looking for a banjo mute on tour, a man in a Michigan music store said, “I think a sledgehammer is the best mute for a banjo.” That man should’ve heard Jones’ performance; I bet he’d change his mind.

An emotional moment during the performance came about with a song called Mother’s Day. Jones revealed his disgust for “Hallmark Holidays” created to take advantage of consumers, but Mother’s Day is now a mournful reminder of his mother’s passing. He was writing the song when he got the call that she had passed, so he knew that particular song “would always be evocative of that moment.”

Jones complimented the Mission Creek sound tech, saying this was one of the best shows of the tour. The show was mellow, but I was incredibly impressed by both of the performers’ talent.

One of Jones’ last songs was a banjo piece, dedicated to Paul Metzger. After Metzger’s set, he sat in the booth directly in front of me, so I snapped a cute picture to highlight their friendship. It was a good show with expressive, pure music–now I’m going to go practice guitar so that maybe one day I can be half as good as Glenn Jones.