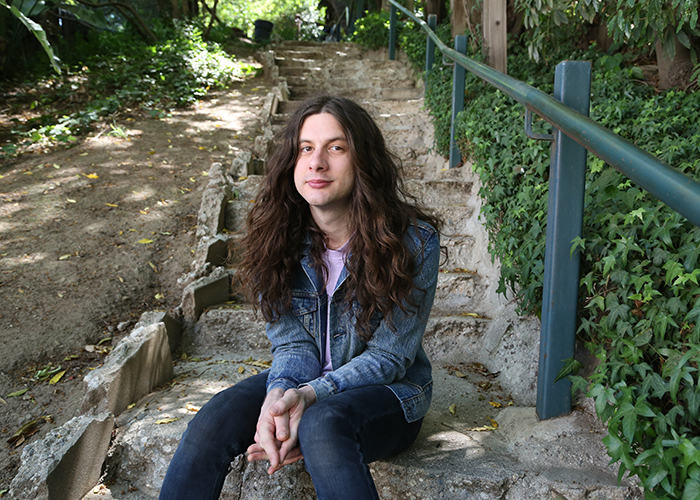 Of all the Mission Creek events I attended throughout the festival, Kurt Vile at the Englert was probably my favorite. Originally, the event was going to be covered by another KRUI staffer, but unfortunately she fell ill and needed a sub. The concert was the last official event of the festival, and was a (mostly bitter) bittersweet end to the crazy week.

Though I generally try to be as close to the stage as possible, I decided to sit up in the balcony for this show. The bird’s eye perspective was a nice change, and I welcomed the personal space of a seat rather than a sweaty mosh pit. This show pulled the biggest crowd of any I attended. It wasn’t hard to find a seat when the doors first opened, but practically every seat was filled by the time Kurt Vile and the Violators came on.

The backdrop on the stage was created by crinkly tan fabric, or at least that’s my best guess; when hit by different lighting effects, it looked a bit like a Colorado mountainside. The varied lighting throughout the show created some really awesome visual moments. I also noticed how balanced the band sound was, which was impressive in such a large venue.

Purling Hiss usually performs as a three-man band, but for this tour the lead man Mike Polizze worked alone. With the help of a looping pedal, he created the set with three instruments and many distortion pedals. Purposeful feedback made for some unique, white noise-style music–as someone programmed to wince at feedback, it took a very open mind to enjoy some of the squeakiest moments. The amp was cranked up incredibly loud; his performance was the highest volume I’d encountered all week.

Before changing instruments between songs, Polizze would record a short riff and let the looping pedal create a transition. The repeating clips reminded me of the phenomenon of repeating words over and over until it takes on a new meaning; strange, but artistic. Everyone sat through the set, which included songs like “Run From the City” and “My, My, My” from Purling Hiss’ new album.

Polizze either wasn’t very invested in the Iowa City show, or sensed that everyone was anxious to hear the headliner, so he nonchalantly added, “all right, I’ll get this over with” and shortly left the stage.

Kurt Vile & the Violators sauntered onto the stage with red solo cups in hand. Vile used the microphone for strange “yip” and growling noises over trippy synthesizer, so I really didn’t understand what was going on. Everyone was still sitting through the first song, which definitely created a low-energy vibe. Vile picked up on this and said dryly, “oh please, just make yourself comfortable.” The floor crowd then stood and people filled the pit.

Vile was a very quirky performer, but I really enjoyed the laid-back, chill vibe of the music. He kept his long, brown curly hair in front of his face for most of the show, somewhat like Sia, but with a 80’s grunge twist. I was excited to notice a whammy bar in real life for the first time, rather than just in Guitar Hero.

As soon as Vile finished each song, he would practically jump rope out of his guitar strap, hold it out, and switch with the tech guy into a new instrument. I was very impressed by Vile’s guitar technique; his vocals weren’t anything crazy special, but he was a solid, honest performer sounding almost exactly like his recordings.

My favorite moment of the concert was during a long instrumental break: the lights were flashing between many different effects, the crowd was moving and grooving, and you could just feel the performer’s passion in their music–it was the kind of moment I wish I could live in forever.

After the encore set, Vile gave a subtle wave and walked off. See you next year, Mission Creek.