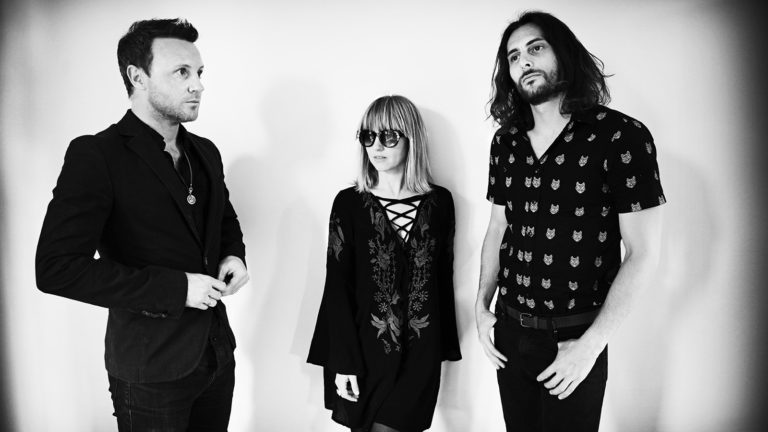 When I arrived at the Englert Theatre for The Joy Formidable, I was pleasantly surprised with a warm welcome from the box office staff and full Mission Creek media/print access. This was my first event at the Englert, so I was impressed by the space and classic theater venue right in the heart of Iowa City. Twenty minutes after doors opened, however, there were only about forty people present.

The stage was already set up for the opener, Everything Everything. Red and magenta stage lights were embellished by billowing smoke pouring off the stage. I could already tell this was going to be a much different concert experience than last night at The Mill.

Of the people who showed up early, there was no single “type.” Most people chose to sit near the front; all ages and all styles. For example, on one side of me was a polished young girl reading a novel, while the man on the other side had dreads, ruffled tie-die clothes, and a mysterious large bag in his lap.

When the mysterious bag man noticed me writing notes, he said, “oh, I hope you didn’t catch me talking baby talk!” Um, no? I was confused. Turns out, there was a cat sitting in the bag on his lap. A CAT. I’m all for therapy pets, but I never expected to enjoy an alternative rock concert in the company of a feline friend. Luckily he never let the cat out of the bag (ba-dum-tsss). Oh, Iowa City–never change.

The lights dimmed, and Everything Everything made their dramatic entrance to the stage. My first reaction to their matching tan outfits was basically this: so this is what would happen if Kanye West’s fashion line and Sgt. Pepper’s Lonely Hearts Club Band had a baby. Their music had similarly unique flair.

The British rock band kept high energy despite the small, mostly sitting crowd. At one point between songs, the lead man remarked, “Silence? This show is much different from the rest of the tour. PLEASE clap.” I was already clapping, but other people seemed to take the hint to loosen up. A small crowd rushed to the front and starting dancing in the pit. I couldn’t help but wonder how the cat was doing with all the loud, flashy stimuli.

So far everything (everything, ha) about the show had me feeling kind of, well, weird. I can definitely respect Everything Everything’s performance, but they are not a band I would enjoy listening to regularly. It was fun to dance along to the synth and feel the thundering bass in my chest, but I wasn’t overly fascinated. And it drove me crazy that the drummer couldn’t keep a steady beat.

The Englert was an awesome venue for this show! I really loved all the different light effects. The colors changed seamlessly during or between songs, and the lights really helped the bands create bad-ass stage presence.

While waiting for the headliner to take the stage, I found a spot in the front row next to krui.fm‘s lovely editor-in-chief, Alex Restrepo! She’s a busy lady, so I felt honored to experience a concert with her before she graduates from the University this spring. Several other KRUI directors and staff members were at the show, so I could tell it was going to be a good one. And boy, was it!

The Joy Formidable took the stage; the rocking trio Ritzy Bryan, Rhydian Dafydd, and Matt Thomas united in Wales in 2007. I was amazed at the power and volume the three of them made. After one especially extreme guitar riff by Ritzy, an audience member exclaimed, “Face melting!!” She thanked him by blowing a kiss; that with her elegant accent made her adorably hardcore!

The band had fun with a varied set list, playing Ostrich from their first EP as well as Passerby, a song from their newly released album. Passerby’s message is to make your own way in life, no matter if it’s not what others expect of you. I usually couldn’t make out the lyrics over the deafening cymbals and electric guitar, but I wouldn’t have wanted it any other way.

Matt, the drummer, liked to interact with the audience with widened eyes and a waggling tongue. Other than the drumset, he played a huge gong and delicate wind chimes throughout the show. I lost track of the number of drumsticks he went through; chips of drumstick were flying all around. Rhydian would occasionally “assist” Matt by flicking or even kicking the little splash cymbal. Little playful moments like that made me smile and get even more into the music.

When the band first left the stage, the entire crowd screamed for an encore. They came back with beers and played a fairly long encore set. Even the “balcony party for two” that Ritzy giggled about continued to dance until the very end. I loved seeing The Joy Formidable, and I’m excited to see what else Mission Creek 2016 has in store!