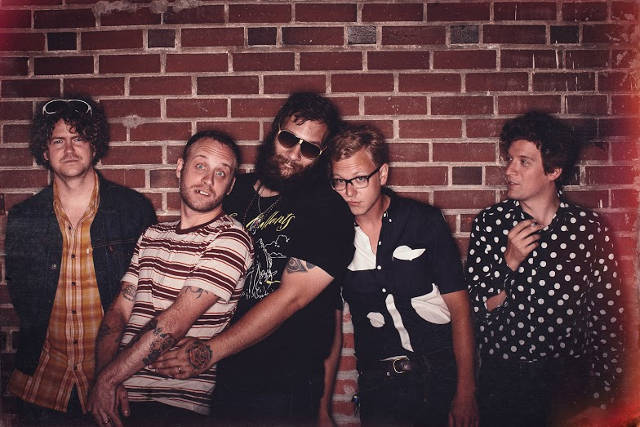 Day two of Mission Creek Festival 2016 was my very first interaction with live music in Iowa City. Deer Tick at The Mill did not disappoint! Once I got through the line snaking through the restaurant, the bouncer gave me a lovely permanent marker underage-X on my hand. The only other two “young” people in the venue were in a booth next to me; everyone else was in their upper twenties or older. Fun fact: I counted at least 15 people wearing flannel, and almost all the guys had beards and a PBR in their hands.

I could tell right away that Deer Tick has a faithful and well-established fan base. The wait staff stayed busy delivering drinks and various snacks and then more drinks. The Mill created a cool vibe with dim lighting and blaring jazz fusion.

As I sipped my tap water I noticed how every square inch of the stage was full of instruments and sound equipment. Not only that, but there were two massive travel cases off to the side with at least a dozen string instruments. But I’ll come back to that later.

The first opener, Nadalands, came on when everyone was still getting settled in the venue. Acoustic Nadalands was John Lindenbaum, from Ft. Collins, Colorado. He played a 12-string guitar and sang a dozen of his wailing, lyrically smart songs. His sensitive persona was created in part by a cheeky Sloth tee and his intensely expressive eyebrows.

His voice reminded me a bit of early Ben Folds, though not as clearly articulated. Each song sounded somewhat alike, with story-telling lyrics and repeated “oohs.” The bar crowd talked over his set, but that did not stop Nadalands from belting his heart out to the back of the room. My favorite lyric inspired a quiet chuckle from the crowd with, “They’ll put posters of our faces on dorm room walls in private colleges…Don’t be afraid, cause we’re all gonna [bleeping] die someday.”

By the time Ryley Walker came on stage, the place was packed with people; most of them extremely intoxicated. Ryley Walker’s acoustic guitar was supported by a slammin’ upright bassist. Halfway through their first song, the crowd felt comfortable enough to congregate toward the stage.

Walker’s chops were incredible, and he’s not half-bad to look at either! The crowd definitely picked up on the duo’s energy and began to groove with the music. A common technique they used was repeating a riff over and over until the built-up tension exploded into the next part of the song. It was a folksy version of waiting for the bass to drop in dub-step.

I overheard a guy behind me complaining, “The Mill is the worst venue for an acoustic set ever because them people [at the bar] just won’t even shut the [bleep] up.” He and his friend carried on their conversation right nearby the stage for the rest of Walker’s set. Oh, the irony.

Walker had a relaxed confidence about him, and he repeatedly interacted with the crowd. He borrowed a audience member’s phone to shine a light on his pedal before a song, and also yelled back to a drunk screamer-type. He described the inspiration of his song Roundabout as “bars with mozzarella sticks and rednecks.” I really enjoyed his set and would highly recommend going to one of his shows!

From my vantage point (2nd row, but only 5’3″) I could only see John, Dennis, and Ian. Keyboards and bass held their own as a solid rhythm section all night. The three in front traded off lead vocals; John sang the most, and has the most unique grit quality I’ve ever heard.

The band started with a tribute to Merle Haggard, a legendary country singer who passed away the day of the concert. There was a slight hiccup because Ian forgot about a last-minute key change, but once they started over, they played a beautiful cover of Today I Started Loving You Again.

John brought the mood back up by telling a memory he had from a previous concert at The Mill: naked crowd surfing. He promised that would not happen again, however. The reasons they wanted to tour again were to practice new music they’ve been working on, and also for the money (jklol). I was incredibly impressed by their musicality and overall composure as a band.

Almost every song, John or Ian would have a new instrument brought to them; John also utilized a banjo, mandolin, flute, and piano. Flute?! Yeah, that was my reaction too. Rob on keyboards also switched around instruments, including a saxophone feature. Despite all this, I was most impressed by the drummer, Dennis.

Now, I’m probably biased because I’m a percussionist and have tons of drummer friends and family members, but Dennis seemed like someone I’d really want to make music with. He was the main harmonizer, but he also gained huge support from the crowd during his lead vocal tracks. One of my favorite moments of the entire show was a cute moment I shared with Dennis: after one of his two solo songs, we locked eyes and shared a classic “sup” nod and chuckle. S’cool.

Inbetween songs early on in the track, John was really upset about not being able to hear himself. Steam was practically coming out of his ears. Band and audience members alike tried to console him, but the only fix was whiskey and time with the exuberant crowd. Eventually he joked, “Okay, sorry, I’m back. I like music because it can take bad feelings and turn them into good feelings. Thanks for being part of my medicine.” I’m thankful for creative, talented bands for making awesome music!

I’ll always remember Deer Tick at The Mill as my very first concert in Iowa City. Here’s to many more!