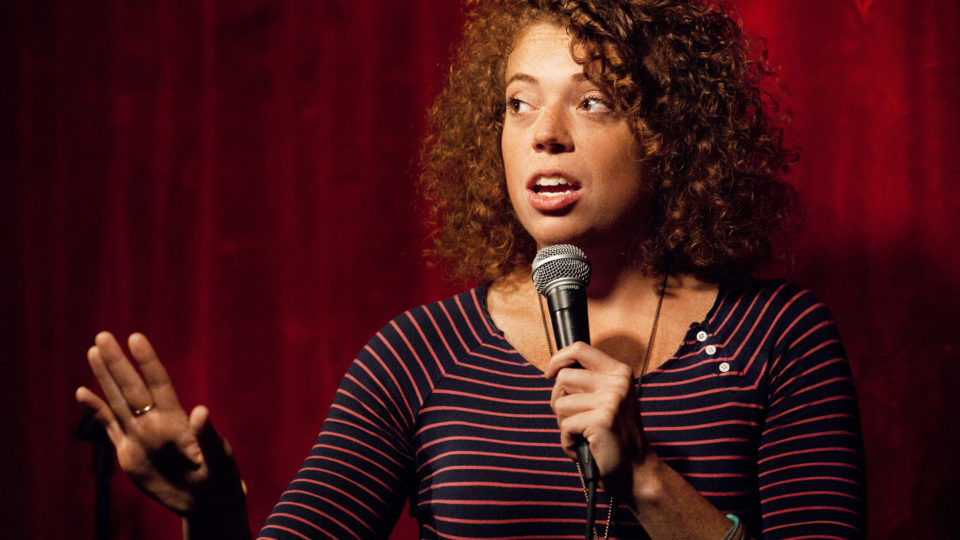 *Disclaimer:  This article contains material that may be deemed inappropriate for minors

Attending comedy shows in today’s political climate always seems like a bit of a risk to me, but after seeing Hasan Minhaj recently at The Englert, I felt more open to the experience. Mission Creek Festival brought Daily Show Correspondent Michelle Wolf, comedian Janelle James, and two local comics Spencer Loucks and Arish Singh to The Mill on Saturday night.

The night began quite awkwardly. Loucks (the only white guy performer of the night) got on stage and dramatically declared “Guys… Stop thinking about sex… Hostess sells ice cream!” His first joke was met with mostly silence and confusion. After his weird bit about short orgasms and eating Twinkie ice cream, he became more comfortable on stage and got more laughs with some self-deprecation about embarrassing acting auditions and awkward dates.

Loucks introduced the first guest comedian to Iowa City, Janelle James, whose performance consistently drew laughs. James, who has been opening for Chris Rock’s comedy tour, shared uncomfortable but hilarious thoughts about the transition from “pee-pee” to “dick” in her thirteen-year-old son, and racist casting calls for angry black women.

One of my favorite jokes regarded the popular reality TV show The Bachelor, and how the sought-after single man of the title is just some “basic white dude named Ben.” She also pointed out that in the “900 seasons” of the show, the token black woman and token Latina woman get cut in the second week of the show, even though “minorities put up their best” to audition.

James joked about her confrontations with white people having lived in the Midwest, confessing that she likes white men: “Not as human beings or as people, I mean in a sexual fetishizing way.” She transitioned from this joke to discussing how disappointed she felt when she realized that a bonfire is just a fire, despite the “hype” by white people.

After a short intermission following James’ set, Arish Singh, a comic who splits his time between Chicago and Iowa City took the stage. Having seen Singh perform before, I knew about his provocative jokes that many white neo-liberals of Iowa City respond to with tight lips and discomfort. When half the room did not laugh at James’ joke about the whiteness of The Bachelor, I was curious how they’d respond to Singh’s request that Republicans in the room chant “race war, hell yeah” followed by a minority group they hate.

Unsurprisingly, those audience members did not appreciate his frankness, but the majority of the room did. They laughed at his plea to eradicate the evils of ventriloquism by calling their senators and exposing Jeff Dunham as a cheap racist hack. Then, he introduced the headliner, Michelle Wolf.

Like Singh, she wasted no time before getting political. Wolf brought up how politicians are “trying to figure out where trans people should go to the bathroom,” suggesting an ingenious idea: “bathrooms.” She explained that the only thing women worry about in bathrooms is making sure no one knows they’re the ones pooping: “I tried to cough a lot and only go when the hand dryer was on.” Wolf suggests that pooping loudly in a bathroom is a great way to avoid predators, though; she said that farting on the whole walk home could ensure one’s protection.

Wolf told one of my favorite jokes of the night when she described the “fatal flaw” of women: wanting to help other people. She tells a story of sitting in a meeting and seeing a man who needed a napkin, and becoming so distracted with this “poor baby” and wanting to help this man so badly. “I know where the napkins are, I have legs, I could go get him the napkins and I could save him!” I’ve had this thought so many times before, and while I don’t know about generalizing all women, I could definitely identify with this joke.

While Wolf had some great high notes to her set, she also had numerous moments during her performance when I felt confused about her jokes. Several times in her set, she compared the gender identity and sexuality of gay men to straight women in problematic ways. Wolf included a joke in which a trans women wore a shirt better than her, and told the woman to “stay in her lane.” When Wolf began a joke with “there are some jobs immigrants are just better at,” I really felt disconnected to her comedy.

While she revealed her problematic feminism, I still appreciated some jokes about so-called feminist movements like the Free The Nipple campaign, which she suspected originated from a creepy man wanting to see nipples on the internet. She suggested that Instagram and other social media platforms simply ban male nipples instead.

While Janelle James was my favorite performer of the night, the other comics all had great moments in their set. Thanks to Mission Creek for bringing them to Iowa City!