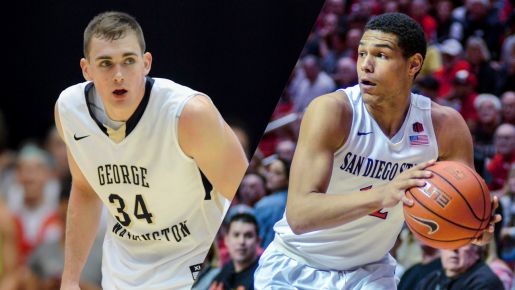 The NIT tournament might not have the same flash compared to the NCAA tournament but it will have the spotlight Tuesday night as the semifinals take place in Madison Square Garden.

No. 2 seeded San Diego State has been dominant all tournament long by winning all of their games with by at least a 15 point margin. The Aztecs will have a tough test though as they go up against George Washington who has been lighting it up offensively and pouring in over 80 points each game this tournament.

Head coach Steve Fisher and the Aztecs will also have to face an entirely different environment as they are playing across the nation in what some say is the “basketball mecca” of arenas in Madison Square Garden. Having played their last two tournament games at home, the Aztecs will have to step up and show they are capable of getting it done on a neutral floor.

“It was a team that was probably playing in the wrong tournament to be honest with you, They deserve to play in the NCAA tournament. Their numbers showed it, their record showed it,” former Georgia Tech head coach Brian Gregory said according to Mountain West Connection.

George Washington has proven their toughness as well this season by scrapping out difficult wins against top tier teams such as Virginia earlier this year. Going into Tuesday night the Colonials will heavily depend on senior leader Tyler Cavanaugh who has dropped at least 20 points a game this tournament and also on junior Kevin Larsen who has chipped in over 15 points a game during their NIT run.

Like George Washington the Aztecs are led by a heavily loaded upperclassmen starting lineup to show both teams are bringing experience to the table. A key for the Aztecs success will come down to whether sophomore Trey Kell will be able to keep producing for the team as he has put up doubles digits the past two games and continues to shoot better from the field as the tournament rolls on.

“You watch the NBA and everyone, everyone known basketball player says they love going to New York, they want to put on a show from LeBron to Kobe To Michael, so it’s just one of those things, if it’s special to them, it must be really crazy and special. I’m just really excited for the experience,” Trey Kell said according to Mountain West Connection.

The Colonials are an impressive 71-11 when leading at halftime with five year head coach Mike Lonergan but Aztec head coach, Steve Fisher, has gone through a lot of battle tested games when being down having previously coached the famous Fab Five through many tough fought  games against top programs.

The game is set to showdown at 8 p.m. CT and the winner of this game will move on to the NIT championship where they will go up against either Valparaiso or Brigham Young on Thursday March 31 in Madison Square Garden.