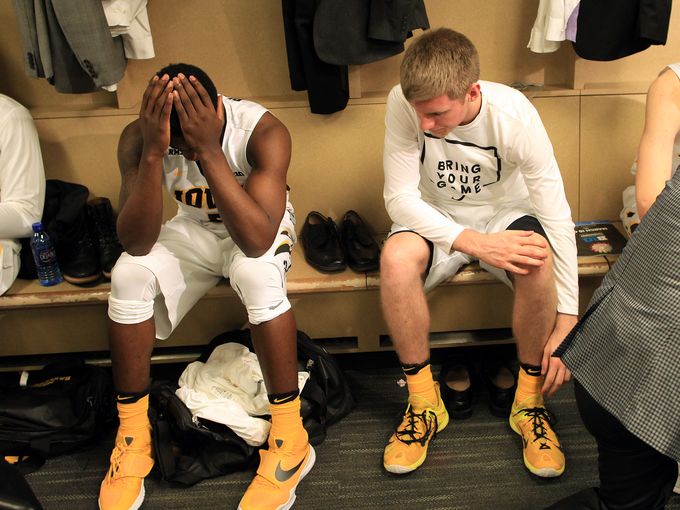 INDIANAPOLIS- It is the same issues, but a different year for the Iowa men’s basketball team.

The team reaches its highest point in the first half of Big Ten Conference play, and they struggle mightily as the regular season comes to a close.

First, it was the 2013-2014 season that saw Iowa start 8-4 in conference play but lose five of their last six games to end the regular season with a 9-9 conference record. That team went on to lose in the first round of the Big Ten Tournament to Northwestern before bowing out in a First Four game against Tennessee.

Then, it was last season. Iowa had momentum going into the Big Ten Tournament winning their last six games of the season, but then the Hawkeyes lost their game to Penn State, the #13 seed in the bracket.

The 2014-2015 team won Iowa’s first NCAA tournament game since 2001 with a blowout of Davidson, but they ran into a buzz saw in Gonzaga in the second round and lost by 19 points.

This season, nobody knows how Iowa will fare. They easily could lose their first tournament game, but they could make a run towards the Sweet 16 or further.

The Hawkeyes again limped across the finish line losing five of their last regular season games.

Unlike previous years, Fran McCaffrey and company are clearly in the Field of 68 but the seed and destination has yet to be determined.

Iowa will likely be somewhere in the five to eight seed range. The professionals who make brackets a living have Iowa playing anywhere from Denver, Spokane, St. Louis, and everywhere in between.

Compared to their last two predecessors, this year’s team has a considerable amount of upside when things are clicking.

The upside was not on display in Indianapolis Thursday night as Peter Jok and Jarrod Uthoff were the only two players that showed up as the Hawkeyes fell to Illinois 68-66.

The two combined to score 50 of Iowa’s 66 points, while the rest of the roster made only 6 of their 30 shots attempted.

If Iowa does that in their first NCAA tournament game, it will be a quick trip wherever they go.

The bracket will be unveiled tomorrow at 4:30 central time on CBS.