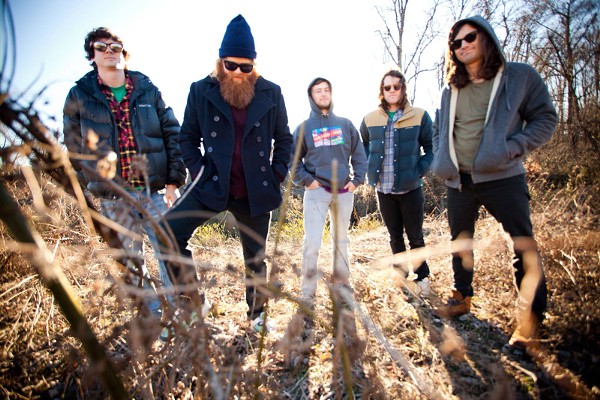 The Futurebirds have been successfully making music since 2008. They began their journey in Georgia. Their first album to drop was in 2011, Hampton’s Lullaby. Since then, they have released two other albums as well as a handful of EPs. Currently, they are signed at Fat Possum. Because Futurebirds have been classified as many different genres, including indie rock and country rock, the band can capture almost anyone’s interest. All you have to do is give them a try.

Paranoia Letters– This song has a Beach Boys-meets-modern-day feel to it. The tone of their voices remind me of the popular 60’s band, but their instruments remind me of indie rock. It is difficult to understand what they are singing at the beginning. It gets better as the song goes on but I was always straining my ears to try to catch everything. The electric guitar solo in this song is excellent though. It almost sounds muffled, which reminds me of something I would hear only on vinyl. The vibe of the song almost makes up for the lack of diction in the lyrics.

Twentyseven– You can make out the lyrics of this song a lot better than in “Paranoia Letters.” This song starts out as country rock but changes to indie rock as the song goes on. This song is about relying on someone. They say, “Without you, I’d be through.” This song is a total toe tapper. The beat is intoxicating until the end when the musicians slow it down so you can really hear the lyrics.

For You – This song is on the slower side. It is again hard to make out the lyrics the singer is singing, but there are parts where the instruments die down and all you can hear is vocals. I think that those lyrics, plus the tone of the song, made me understand the what Futurebirds were trying to get across without knowing every word. The song again has an excellent instrumental solo. I always appreciate when musicians do this because it reminds me of the the classic rock era, which as the name says, is forever classic.

Xmas Drags– When I first heard this song, I thought it sounded like the Beach Boys with a little twang. The lyrics are crystal clear in this piece. This song really pushed me to call myself a fan of the Futurebirds because it showed the range these musicians can travel.

Hotel Parties– This song is would be classified, without a doubt, as country rock. The lyrics and vocals remind me of late 1990- early 2000 country, which in my opinion had the best music, but the instruments definitely put off a rock vibe. It has a lot more twang than the rest of the numbers and you can really understand the lyrics in this song, more so than any other song on the album. I can totally understand why they would use this song to name their album.

Rodeo– The vocals in this song are raspy with only a little bit of twang. If I hadn’t heard the other songs in this album, I wouldn’t have noticed it at all. This song basically uses a rodeo as an analogy for a relationship. I  liked this song, but I think their are better songs on this album than this one.

Paper Tongues– This song almost identical to the songs at the beginning of the album: indie rock feel, distant vocals, unrecognizable lyrics. I think lyrics make a song stand out, and since the you can’t make out many of the words, it makes the song less appealing. Don’t get me wrong, the instruments and tone of this song is excellent. But without lyrics all it sounds like is background noise.

Slow Talkerz– This song seemed very odd to me the first time I heard it. The beginning is a combination of sounds. I could make out a piano and what sounded like an airplane taking off, but there were other sounds mixed in. It reminded me of a horror film, which turned me off until all the other sounds cut out and an all you could hear was a guitar. The lyrics are nice and the vocals are beautiful, but the beginning was not my favorite.

Deadbeat Hits– This song sounded very familiar to me. I could imagine it being played in a movie like “Stuck in Love” or some other “find your way” film. The musicians really played with the instrument accompaniment in this song. They use their voices, different forms of percussion, and I think a few everyday recorded noises. I feel like the instruments in this piece set it apart from the rest of the numbers in the album.

Let It All Loose– This song is a lot slower than the rest. It sticks to the guitar and piano through out the song, nothing too fancy, but that is all this song needed. The simplicity of the song made this song stand out. It has one of the melodies that makes your heart swell, as cliché as that sounds.

Hard as You Like– The instruments at the beginning of this song made me think of something that would be played at the beginning of a western or during a shoot out in the Wild West. This western melody comes up multiple times in this song. It makes the song sound ominous and exciting, like you are waiting to see what will come next. The thing I enjoyed about this piece was that you would not expect the lyrics and the instruments to go together and work, but they do.

The Futurebirds are excellent musicians. They show variety in every aspect of a song, which is difficult to do with eleven songs. They had a way of traveling me back in time, whether it was to the 1820s or the 1980s, these performers kept me on my toes, as I expect they will do for you too.

If you want to learn more about this band you can follow them on Facebook. If you are interested in seeing the Futurebirds live you can look at their tour dates here. If you want to buy their CD you can do it here.