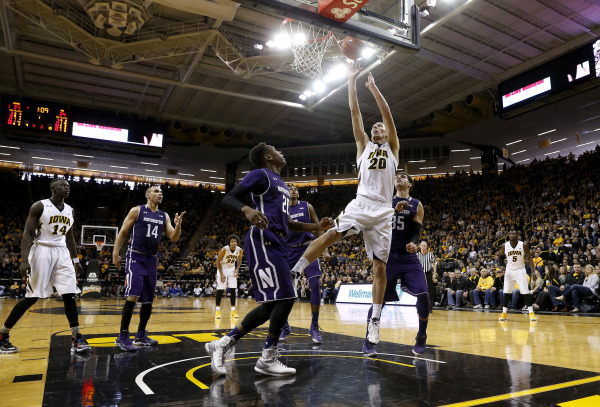 The Iowa Hawkeyes men’s basketball team bounced back from their first conference loss of the year, defeating the Northwestern Wildcats 85 to 71.

Jarrod Uthoff and Peter Jok were essential, notching 49 of Iowa’s 85 points. “Uthoff and Jok were the two guys we wanted to be with at all times,” said Northwestern coach Chris Collins. Uthoff had 19 points in the first half and finished with 23, while Jok scored 26 points, 22 of which came in the second half. “We lost him (Uthoff) a bunch, and in the second half we lost Jok,” said Collins.

The turning point in this game was the second half run led by Peter Jok. Jok hit three consecutive three pointers for the Hawks just as Northwestern had gotten to within ten points, and from that point Jok took over the game. Jok shot 6-10 in the game with four three-pointers, and went 10-12 from the free throw line.

“He’s (Jok) really an interesting player, because he’s so smart, and he gets open, and he gets going,” said Head Coach Fran McCaffery when asked about Jok’s performance.

Free throws played a big factor in the game, as the Iowa Hawkeyes shot 36 free throws, to Northwestern’s 14. Collins noted Iowa’s veteran leadership. “…they’re a veteran team, they’re smart and they knew how to get themselves to the line.”

There was nothing but praise from Collins for Fran McCaffery’s team. The one thing that stood out most to Collins was the Hawkeyes’ experience. “What you see is all juniors and seniors that believe they’re good.”

Collins couldn’t help but throw in a bit of humor when talking about Coach McCaffery. “I’ve known Fran since I was a ball boy and he was a player at the University of Pennsylvania… I used to watch him play back when he was ‘White Magic’.”

The Hawks improve to 17-4 on the season, with an 8-1 record in the Big Ten Conference, good for a share of first place for the Big Ten standings with Indiana. The Hawks’ next game comes on Wednesday, February 3rd at home against Penn State University.