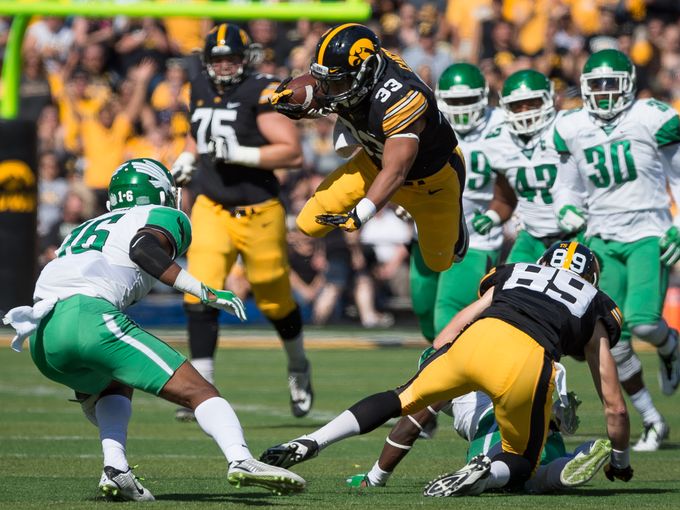 After receiving the game’s opening kickoff, Iowa put the ball in the hands of their dynamic running back four times on their initial seven-play drive, culminating in a 16-yard touchdown scamper into the mouth of a raucous student section. Canzeri accounted for 55 yards on the drive, part of his 22 carry, 115-yard performance.

“We knew that’s just what we wanted to do—we wanted to run the ball and obviously have success with it,” he said. “That’s exactly what we did.”

It was the first of four trips to pay dirt for the Troy, NY native, which ties an Iowa record last achieved by Shonn Greene in 2008. Canzeri now has eight touchdowns through the first four games of 2015, and is averaging a massive five yards per carry.

After the game, rather than focus on his individual accomplishments, Canzeri focused on crediting his teammates.

“We have a lot of guys who can get that job done,” he said. “We know teams are going to load the box when we run it. Then we have great receivers and a quarterback that can make a great throw. It’s just awesome when we have all 11 guys working the way we are.”

While Canzeri has been both a productive runner and pass catcher in Greg Davis’ offense, save for a 6-yard reception, Saturday’s scintillating performance was entirely on the ground. Canzeri ran behind center Austin Blythe all afternoon, who was impressed by his running back’s career day.

“Anytime you score four touchdowns, I think it’s pretty impressive,” Blythe said. “For him to do that is just a testament to his hard work.”

Canzeri finished his performance with his fourth trip beyond the goal line, leaping over the pile to find the black paint of the north end zone. His day was done prior to the forth quarter, able to watch the game’s remainder from the sidelines with the rest of Iowa’s offensive starters.

After finishing the non-conference portion of 2015 unblemished, the Hawkeyes will head north to begin Big Ten play, heading to Wisconsin to battle the Badgers next week. Echoing sentiments circulating the Hawkeye locker room, Canzeri is feeling the momentum the team has built over the first four games.

“When all of us are playing the way we are, and having a game like this, it’s just so cool to be apart of,” he said.