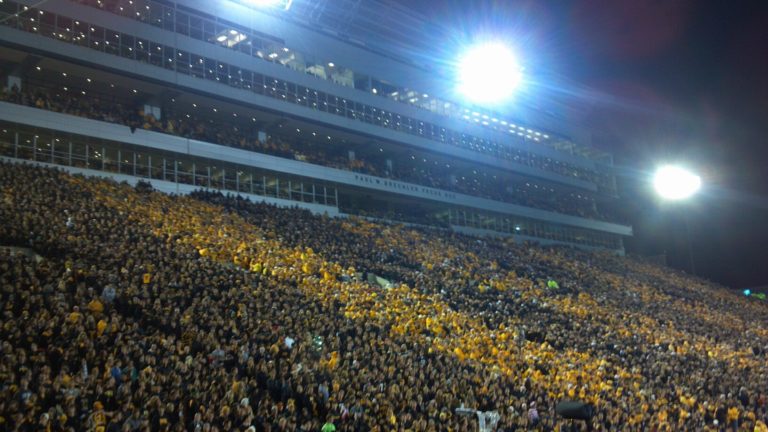 IOWA CITY, IA – The Iowa Hawkeyes will take the field under the lights of Kinnick Stadium. twice in the 2015 football season. The Big Ten Conference announced on Monday, April 13 that the Hawks will face Pittsburgh on September 19 in a non-conference battle. The second game will take place on November 14 as the Minnesota Golden Gophers travel to Iowa City, with hopes of keeping the Floyd of Rosedale Trophy.

The last true “night game” happened in 2012 when Iowa welcomed the Penn State Nittany Lions into Kinnick, losing 34-14 and ultimately finishing with an overall record of 4-8 and 2-6 in the Big Ten.

Many ask why fans prefer night games over the earlier start. The opening kickoff to the 2012 Iowa/Penn State game has been engrained in my mind ever since that moment. 70,000 plus fans on their feet, going insane as AC/DC’s Back in Black poured through the Iowa City air will be something that will stick with me forever.

While the outcome of that game and season were both forgettable, you still can’t take away those brief moments in a special place like Kinnick Stadium. After that season, I wondered when, or if I’d ever get to experience that feeling again.

Flash forward to the 2014 season. The no. 14 Wisconsin Badgers came into Iowa City, expecting then-senior Melvin Gordon to bulldoze the Iowa Hawkeye defense. Gordon did just that scoring twice while rushing for 200 yards on 31 carries. The Badgers jumped out to 19-3 lead in the second half, leaving thousands of Hawkeye fans saying “Here we go again.”

However, this night was different.

The sun began to set to the west and the lights beamed onto the Kinnick Stadium turf. The dust of the electric atmosphere, the one I had witnessed two years prior, was starting to fall from the bricks of Kinnick. It was time for the Hawkeyes to play some football.

A seven play, 70-yard drive by the Hawkeyes led to a Kevonte Martin-Manley touchdown and an ensuing two-point conversion making the score 19-11 in the third quarter.

Iowa then made the score 19-17 on a Jake Rudock scramble in the fourth quarter. The Hawks ultimately ended up losing 26-24 to UW, but outscored the Badgers 21 to 10 in the second half.

While the team lost, they won the crowd that night. For a program that has been questioned, verbally abused and then some, it was a stepping point, even if it was for one-half of football.

This fall will be my last football season that I see as a student at the University of Iowa. I’ve witnessed this program go through hell and then some. It’s time to be excited about football in Iowa City. We can talk about the schedule, position battles and coaches until we’re blue in the face. The debate remains constant, but so does one other thing: Iowa isn’t backing down from anyone.

The Hawks will swarm their home field seven times in 2015. I’m ready for some more of that electric Kinnick Stadium atmosphere.