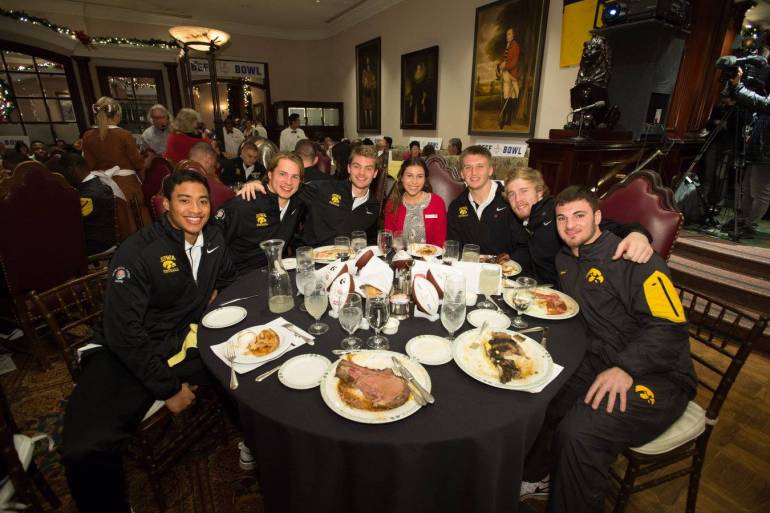 LOS ANGELES, CALIFORNIA- Media members swarmed the L.A. Hotel Downtown today to get their questions answered. It was media day for both the Stanford Cardinals and the Iowa Hawkeyes. Media had access to not only the starters but the entire roster, including Freshmen. It was an opportunity to get to know some of the players who are not as well known to the public. Of course there were the football questions but media day also provided a refreshing element of being casual.

Lawry’s The Prime Rib in Beverly Hills California is home of the annual Beef Bowl, a night of competition between the two Rose Bowl teams where the team that eats the most wins.

The Iowa Hawkeyes took the victory Monday night in the 60th Beef Bowl after eating over 600 lb of meat.

Webster City native, Boone Myers thinks he had a big part in downing 600 pounds of meat. “I ate two platefuls and then somepie,” said the 300 pound offensive lineman.

Myers roomed with 180 pound wide receiver Matt VandeBerg last year and the two developed a brother-like relationship. Brothers are nothing but trouble. Well.. that’s what I’ve been told.

VandeBerg dished out smack talk to Myers when he said, “He thinks he can eat a lot but I think I can go toe to toe.”

Myers was quick with his rebuttal stating, “He might think he can but he can’t.”

The confidence and cockiness against one another resembled the relationship of two brothers bickering. The two laughed at one another but each stood his ground.

Iowa Quarterback C.J. Beathard got his two cents in on the matter. “I’d take Boone for sure in that one,” said Beathard. After a chuckle he added, “I don’t really know what Meer(nickname for Matt VandeBerg) eats.”

“I had a pretty hefty piece of prime rib. It was delicious,”responded VandeBerg.

There were a number of other laughable moments over the course of the day including C.J. Beathard and his teammates taking curious pictures in front of a green screen.

For Iowa, media day provided the opportunity for outsiders to see the camaraderie and brotherhood of the hungry team. It’s safe to assume both Iowa and Stanford are enjoying their time in Los Angeles.

Both teams will enter Friday’s game with upmost confidence and will hope to take the cherry on top for the trip.