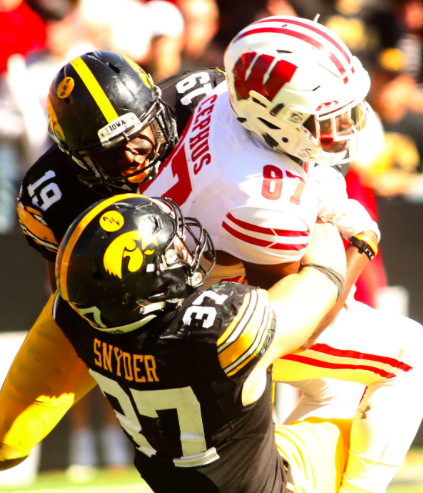 IOWA CITY, Iowa – It was a typical Wisconsin vs. Iowa football game at Kinnick Stadium today as the Badgers escape with a 17-9 win on the road.

In this classic B1G West battle, defense was the focal point for both teams, and the ever-present physicality of the rivalry was on display as the offenses struggled to put up points.

The Hawkeyes had to deal with #10 Wisconsin’s running back Corey Clements, who led all rushers with a career-high 35 rushes for 134 yards and a touchdown. For the most part, the Hawkeyes held Clements in check, as he only averaged 4.8 yards per carry, but he slowly tacked on yards as the game progressed.

On the flip side, Iowa’s rushing attack struggled to get going yet again as Akrum Wadley and LeShun Daniels, Jr. combined to put up just 83 yards on the ground.

“They did an excellent job of getting off blocks and getting to the ball carrier,” said Daniels, Jr. said of the Wisconsin defense. “They had a good game plan and they came out and stopped us.”

The Badger defense held the Hawkeyes to just 236 total yards of offense, which is Iowa’s second-lowest outcome of the season (231 yards in the loss to North Dakota State). Iowa went just 2-for-13 on third-down conversions, and Wisconsin opponents are just 22-for-89 in that category on the season. The Badgers rank sixth in the FBS on third-down defense.

Perhaps the most lopsided statistic of the day was the time of possession battle. Wisconsin had the ball for nearly 14 more minutes than the Hawkeyes, which allowed them to run 13 more offensive plays than Iowa.

“You can’t score points if you’re not on the field,” said Daniels, Jr.

The Iowa receiving core struggled yet again to find a groove as they try to fill holes and get accustomed to new situations. Only one wide receiver had more than one catch, and that was senior Riley McCarron who had six grabs for 47 yards.

Iowa’s leading receiver was Akrum Wadley, who seemed to be everywhere at once when he was on the field. Wadley had 7 catches for 72 yards on the day, both career highs, and he led the team in both rushing and receiving for the first time in his career (44 yards rushing).

In the low scoring affair, it became a waiting game to see which team would come up with a big play to swing momentum, but that play never did come. For Iowa, it was frustrating to be knocking on the door without ever being able to get through it.

“Some plays we left out there today certainly didn’t help our cause or momentum in the game,” said Ferentz. “Certainly the opposition had something to do with that.”

Although the results came up short, Ferentz was happy with his team’s toughness in a game they knew would be physical, as is traditionally the case when these teams meet.

“All in all, I think our effort and our toughness was good,” said Ferentz. “Thought our guys competed really hard.”

The team heads into the bye week at a very opportune time. Some key players, including Boone Myers, George Kittle and Cole Croston, have been battling injuries, and they will have a chance to rest up and try to get healthy before Iowa’s next game in two weeks.

“We’ve got to get those guys to where they can come down the stretch for the last month,” said Ferentz.

#10 Wisconsin moves to 5-2 (2-2 B1G) and will play host to the Big Ten West leading Nebraska Cornhuskers Saturday at Camp Randall Stadium. Iowa falls to 5-3 (3-2 B1G) and will travel to State College, PA on November 5th to take on the Penn State Nittany Lions.