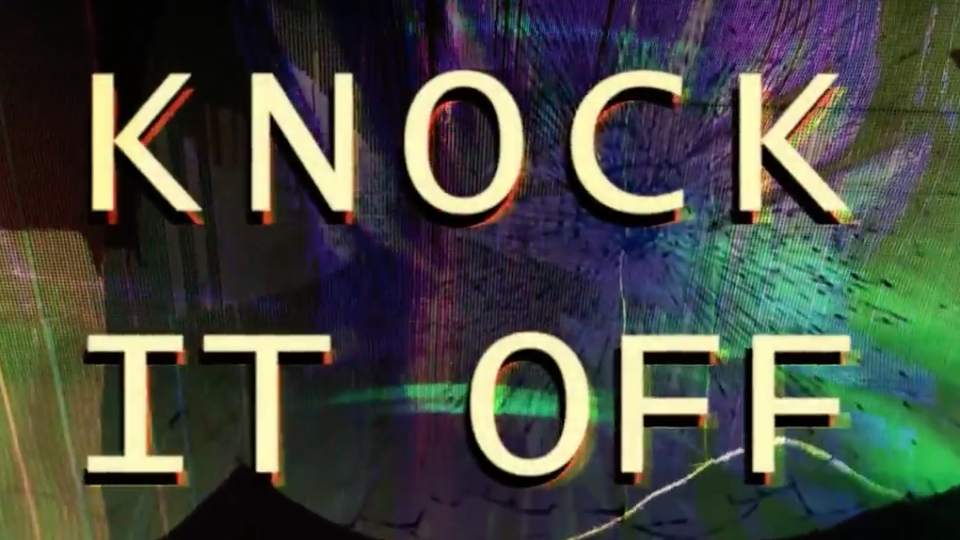 *Below is a playlist featuring the first two episodes of KNOCK IT OFF. The following article may contain spoilers of each episode.*

For today’s Cinema Spotlight article, I’ve decided to hone in a little more locally. Also, today’s article won’t really be analyzing a piece of “cinema”, per se. Instead, I’m going to review a locally-made internet sketch show entitled KNOCK IT OFF.

KNOCK IT OFF is the brain child of its writers, and occasional stars, Carter Davis and Alosha Robinson. Shot and edited by Lev Cantoral, the cast is a revolving door of familiar faces from those involved in the Iowa City theater and comedy scene. Members of the local improv troupes Paperback Rhino and Great White Narcs provide excellent performances to back up the clever and off beat writing.

Let’s start with episode 1. This episode is carried by on the on-going sketch “Going Away Party”, about a man throwing a going away party for himself; he plans to commit suicide that night. Surprisingly, this sketch is the one that is perhaps most grounded in reality. It is also the one that provides the most nervous of laughter, but laughter nonetheless. The protagonist engages with friends and lovers during his party, attempting his best to be a good party host. His guests, like the audience, are left unsure as to whether they should relax and enjoy themselves, or acknowledge the upcoming tragedy.

From here, the audience is launched into the insane world of KNOCK IT OFF. Each sketch is saturated in the surreal, and everything from the color palate to the editing style leaves the audience unsure of what to expect. Take for example the sketch “Tummy Time”, about a man trapped inside the tummy of his friend. The situation is completely ridiculous, but this is where the show shines. The comedy comes from the absurdity of the show, and hardly anything is played directly for laughs. Instead, the shows decides to “play straight” the horror and confusion of the character as he discovers himself in the guts of his friend. “Marley and Me”, another personal favorite, plays out with a complete sense of drama as a man watches his entire life unfold on a movie, while his friends are convinced they’re watching Marley and Me.

Episode 2 takes the show to a new, much darker level. Fear and madness are essential elements to nearly every sketch in Episode 2, but this is exactly what makes the show so engaging and darkly humorous. Fears and anxieties that we all share, such as rejection, unrequited love, and social isolation are explored and then completely dropped on their heads.

The sketch “Spam E-mail” is particularly crushing. The main character, played to perfection by Spencer Hawk, fails at every social interaction he has as he tries to explain the humor he finds in the number of spam e-mails he receives. The awkwardness is crippling as each person he talks to annoyingly shoos him off. The final lingering shot of the episode, of the character driving out for a lonely night at the bars, ends the show on a dark and uncomfortable note.

KNOCK IT OFF places a particular emphasis on language. The fantastic writing of the show shines through in clever word play, and dramatic monologues (a rarity in sketch comedy shows). Episode 2 in particular has some powerful musings on the nature of madness, which is fitting for an audience that may feel as if they are going insane watching the show.

The show also looks fantastic. Cinematographer Lev Cantoral perfectly composes each shot. The saturation and color effects really help to set the off-kilter feel of the show. The show also has some excellent special effects. “Tummy Time” and “The Pit” in particular have some really impressive CGI, and give KNOCK IT OFF a professional production value not usually found in similar independent internet comedies.

KNOCK IT OFF is certainly not for everyone. And the reasons that it may fall flat for some are likely the exact reasons it will have others in tears. You have to be willing to let yourself be taken wherever the show decides to go. It’s not about “getting it”, and not every sketch is some hidden joke that needs to be thought out. Often times, the punchlines of the vignettes are completely absurd, and that’s exactly what makes the show so funny. It manages to be smart and engaging, without ever treading into the area of pretension. If the weird and the absurd are your cup of tea, KNOCK IT OFF is definitely a show you need to check out.

Click here to check out the Youtube page for KNOCK IT OFF, and be on the look out for promos for new episodes.