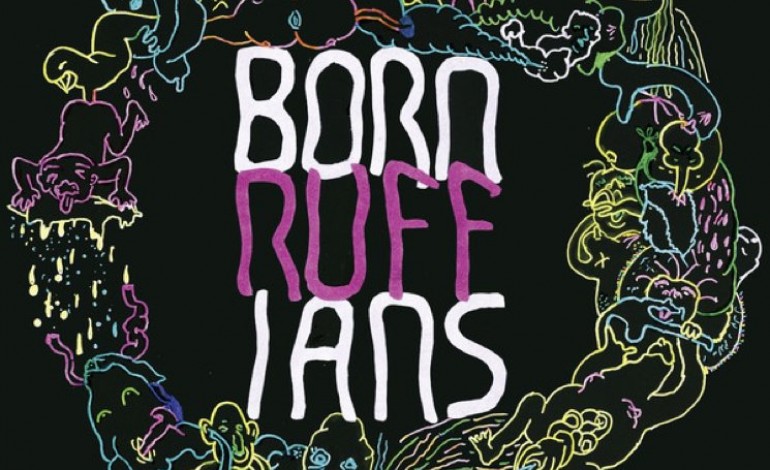 I’m sorry to disappoint all the dog-lovers out there, but Born Ruffians’ newest album “Ruff” has nothing to do with dogs. For those of you that don’t know, Born Ruffians is an indie rock band from Ontario, Canada. The band formed in 2004 also released their first album “The Makeshift Metric Catastrophe” in the same year.

“Ruff” is very similar to other albums by the same band. They definitely didn’t stray far from their comfort zone of shouty vocals and chaotic rhythmic guitars. Some of their other albums are Red, Yellow & Blue, Say it, and Birthmarks. “Ruff” is their fourth full-length studio album and the band has not changed their sound much in the 10+ years that they have been together. This is not necessarily a bad thing; they have a great sound that works for them.

The album’s first track, “Don’t Live Up” is one of the best songs on the whole album. It’s full of catchy chords and the vocals demand your attention. The sound is tightly wound but will have you tapping your foot and bobbing your head the whole time.

Up next is “Stupid Dreams” and it’s full of new-wave guitar chords and like most of the other tracks on this album, is very catchy. Born Ruffians’ lyrics are very clever and one of my favorite lines from this song is, “I am not the cream of the crop but I ain’t never going to stop.” I found that very empowering. “Yawn Tears” is just about as exciting as it sounds. It is slower than most of the other tracks but has its moments. The chorus is the best part about the song. The vocals are extraordinarily yippy, and has a very notable lyric that any listener will have a hard time ignoring: “Watch the moon rising with my hand on my cock”.

The band took a bit of a risk with “Don’t Worry Now”: a minute-long repetitive song. The vocals are warped and makes you feel like you’re in a dream-like state. I feel like it has no real purpose other than being an album-filler. Another track that I was not a big fan of is “When things get pointless I roll away.” Yet again, there were more shout-y vocals and catchy chords; nothing really stood out to me. The only interesting thing about this track is that it was apparently written after an incident with a disgruntled fan.

“& On & On & On” does exactly what you think. The song drags on and on and on. Other than being mildly annoying after a while, the track does have some great drum use and really hooks you once it begins. Another slower, depressing track is “Fuck Feelings.” It is a very relatable song, and makes a great post-breakup jam. The song was one of my favorite tracks, even though there are some very sappy lyrics. One of the lines that really stuck out to me was, “Hey man you’ll never hold that hand, like never ever again.You’re almost someone else now.”

Born Ruffians really enjoyed the use of curse words in their titles on this album. “(Eat Shit) We Did It” almost sounds like it was written to be an anthem with its upbeat verses. The vocals are strong and the chorus was well-produced and is very empowering. Similarly to the previous track, “We Made it” is very bright and bouncy. “Let Me Get It Out” adds to the end of the album with its thunderous distortion, and differentiates itself from the rest of the tracks on the album. Lastly “Shade to Shade” ends the album with its anxious beat and yelping vocals. It’s slower and less upbeat than the rest of the tracks but there’s nothing special about it.

Overall I would give this album an A-; I really enjoyed it. It’s great for easy-listening music while you’re cramming for an exam or just hanging out with friends. Everyone should give it a listen.