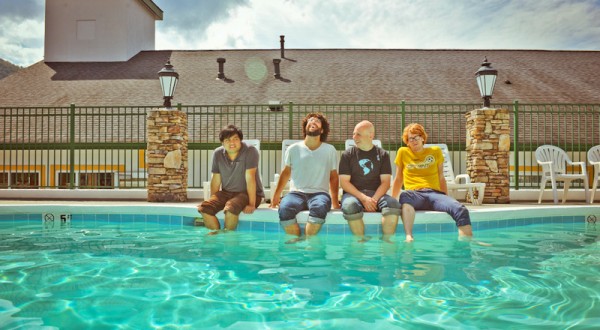 The album starts off with “Looking up to You,” a singer-songwriter staple track. The acoustic guitar and soft maraca in the background make for a fantastic kick-off.  “Circles Round My Mind” keeps the ball rolling by adding some great percussion to the already lush melodies from the first track. The prominent drums continue on “Great Unknown.” It starts off with sweeter vocals, then picks up with some unpredictable chord progressions.

The cleverly titled, “Books You Never Read,” is a slow paced, easy listening track with lyrics that speak to you on another level. “Listen to yourself as you begin to say, ‘tell me everything is gonna be okay'” is one of the lines from the song that really stuck with me after I listened to it. I feel like most of the tracks on this album have a much deeper meaning than they may seem. Golden Bloom picks up the pace again with “Fall Out of Line,” yet again talking about the sucky things of life in a rhythmic, yet direct way. “Racing thoughts just can’t keep up when the walls start caving in” was another beautiful lyric that I could not get out of my head after I heard it on this track.

Full of uplifting and memorable arrangements “Searching for Sunlight” is one of the best songs on the whole album. It is one of those songs that you could listen to on repeat for days. “Come Back Home” was one of my least favorite songs, I did not like the keyboard they added at the beginning and it took too long to get into. Ending the album on a softer more gentle note, “Want Love” pulled me in with more meaningful lyrics about life’s hard truths. After I heard the line, “Weigh your head like a weight upon my shoulder” I replayed it over and over because it was just so relatable.

I recommend this album to everyone–it is just one those albums that are hard not to enjoy even if you do not particularly like this genre of music. It is feel-good, downright amazing music that you can listen to any time of the day, in any mood. If you are sad and want to sulk there are songs on this album that will make you ponder your thoughts for hours. But if you want a quick pick me up, or are having a grand ole time there are tracks on there that will make you want to dance around wherever you’re at. I give this album a 9/10, make sure you give it a listen!