Everybody remembers their first kiss. Mine happened on a cold winter day.

It had snowed an abundant amount the night before, so the superintendent at Ballard High School had called for a snow day. Lucky for me he did. If he had not, I may have never been able to write this personal narrative or learn that, at the end of the day, something that is heartfelt and simple can go a long way.

At the time I was an eighth grader, who had finally grown into her baby fat and was just becoming interested in boys. All my friends had had boyfriends in the past, except for me. So months before this fateful day, I had devised a plan to secure myself a man. Not just any man: Nicholas Baumhover.

Nick was a year younger than me, who just happened to be a stone, cold fox. Being the cougar I was, I watched him for a while. I learned who he was friends with and what type of activities he was in. Once my research was complete, my friend Val helped me get his attention. That was stage one.

Stage two was to create a schedule to get him to fall madly in love with me. Without going into too much detail, the schedule consisted of me texting him first for a number of days, only to stop one day, so he felt like something was missing. He would soon realize that I was the thing that was missing, and text me first instead.

The last stage, to really seal the deal, was my Halloween party. I invited a number of my friends and a number of Nick’s friends, so he would be more motivated to come over. I provided food, movies, and a fire: all the makings for a smashing party. I dressed up as a sexy clown; well, as sexy as an eighth grader who didn’t quite know how to put on makeup could be.

Nick dressed up as a Jamaican. His costume was made up of a black and white striped shirt and a red, green, and yellow beanie with black dreads coming out of it. My costume was a short, white dress with pink frills along the edge and colorful polka dots strategically placed throughout the flirtatious ensemble. We were, without a doubt, the perfect match. 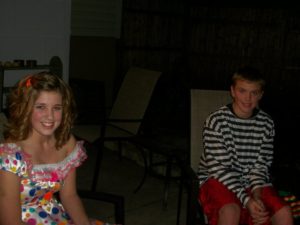 We spent the whole party talking by the fire; hours of divulging our life stories, and Nick fixed the fire every ten minutes to keep me warm. We were officially “together.”

The next few months were bliss. Every day we had stimulating conversations, via text of course. He even gave me his zip-up camouflage fleece, which my friend Val stole from me and gave to someone else. Safe to say, the fleece was never returned to Nick. I was so committed to our relationship that I even stayed home from school one day to finish his Christmas present. I knitted him a black and blue stocking hat that ended up being too big for him, so it just looked like a beanie.

During many of our text conversations, Nick would brag about how great his house was for sledding. So, you can imagine my excitement when I saw “Ballard Middle School: Closed” roll across the bottom of the TV screen one fateful morning.

Nick’s parents had the day off, since the roads were so bad leading out of town, so they let him invite friends to go sledding. Since I was his girlfriend, I received one of the exclusive invites. Around ten in the morning, my friend Val and I walked to Nick’s house in our snow gear. When we arrived, we saw Nick on his four-wheeler and his friend, Charlie, riding on a sled tied to the back of the vehicle with rope. They were whipping around, having a grand time. When Charlie’s turn was over, Nick came to greet us.

He asked if Val and I wanted to have a go, and we obviously said yes. So he tied another rope to the back of the four-wheeler, and Val and I jumped onto our individual sleds.

At first it was really fun. The sled would bounce over every hunk of snow, and the brisk, cool air hit my face as we picked up speed. But as the saying goes, all good things must come to an end, and to an end it came when Nick decided to make a quick, left turn.

Because of how sharp the turn was, I was violently pushed off in the opposite direction of Nick, which would have been fine, if there was a snow bank or something soft for me to run into, but that would have been too easy. Instead of a snow back, I ran into the Baumhover’s thick, wood mailbox post. Luckily, I was wearing a helmet so nothing severe was injured, but I did receive a nice bruise the size of a toaster on my thigh.

Unfortunately I was a junior high basketball cheerleader, so I often had to wear short shorts that revealed my battle scar. Needless to say, my bruise reminded me, and everyone around me, of that glorious day for weeks to come.

After my unpleasant encounter with the mail post, I had had enough of sledding, so instead of challenging death, I convinced my friends to play in the snow with me while the rest of the group risked their lives trying to get an adrenaline rush. After a few hours, everyone was cold, so we took off our snow gear in the Baumhovers’ shed and went into their house to warm up.

Once I was warm, Nick asked if I wanted to go help him pick up everyone’s snow gear in the shed. Being the good girlfriend I was, I obliged right away.

Once we got to the shed, I went right to work. Lost in my concentration of the difficult task of picking up soaked snow pants, I did not notice Nick standing by the door. I finally looked up when he said he wanted to show me something. Excited to see something new, I trotted over there. When I got there, we were standing face to face.

“What is it?” I asked nonchalantly.

“Mistletoe,” He said with a smile. I giggled and looked up but found no leafy green plant hanging above us.

“There’s no mistletoe,” I said confused.

“Does it matter?” Nick said with a nervous smile.

“Nope,” I said without hesitation.

Nick and I leaned in and met each other in the middle. Before we touched lips, I took a moment to truly take him in. We were so close that I could smell his laundry detergent, which smelled like a fruitier version of Lysol. I saw his face more clearly. He had green eyes: the color of the evergreen trees out in his front yard. He had cheeks as pink as a Strawberry Starburst.

The kiss was only a few seconds long, but during those few seconds I made the mental note to ask him what type of chapstick he used because his lips were as soft as butter. After the kiss we finished picking up the snow pants and went inside to have hot chocolate and scotcheroos that his mom had made while we were “helping pick up.”

Nick and my relationship only lasted a few months but to this day, our first kiss is the only one I could possible tell in so much detail that it adds up to over a thousand words. I have had a handful of first kisses in my life time, but none that could match up to this one.