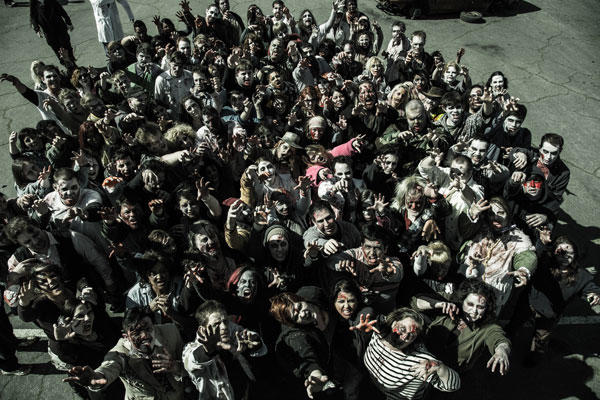 The next morning, Joe wakes up in a hot sweat. She replays the day before in her head over and over again. She feels so alone even though she can hear Benny snoring next to her. Suddenly she thinks of her dad. Where is he? Is he okay? Joe, lost in worry, doesn’t notice Benny wake up until he touches her arm.

They lay in silence until the rest of the group wakes up. Eragon tells them that they need to keep moving. They pack up and rummage through the house, hoping to find something useful to take with them. Unfortunately, they leave empty-handed. They head down the street, Eragon leading at a brisk pace.

“Where are we going?” Bella asks.

“To Limbo, it’s supposed to be safe,” Eragon explains.

“How do you know that it’s safe?” Benny asks.

“I don’t, but we don’t really have any other option do we?” Eragon says.

Joe walks in silence as she takes in the deserted town. She sees a house with blue shutters. It reminds her of her own home. She wonders what the people that used to live in that house were like. Were they a family similar to hers? A widow trying to raise her spunky, seven-year-old daughter? Or was it home to an old couple whose children have long grown up and moved out? Whose only worries now were what flavor of tea they were going to drink as they watched the children in the neighborhood laugh and play in the streets? Sweet or unsweetened? Joe hopes that whoever lived in that house were together now. Even if they were both zombies together, at least they were together.

They hadn’t walked for more than a mile, when they heard the sound of moaning in the distance.

“We need to find somewhere safe to hide out. We are sitting ducks out here,” Eragon says.

They keep walking, faster than before, until they reach a police station. The station is a mess. Scattered loose papers cover the floor along with tipped over computers. As soon as they get in, they barricade the doors with desks and chairs. Afterwards they start looking for something to eat. Instead of food, Scarlett finds a radio. Eragon sends out a distress call.

“Attention, anyone who is still alive. Four other people and I are trapped in a police station with zombies surrounding us. We are two miles away from Spring Valley. We are weaponless and without food. We won’t last long. Please help,” Eragon speaks into the radio clearly.

They sit there for a while, waiting for a response. Suddenly they hear moaning outside the station. Then slamming

against the window. The zombies can smell their flesh. Joe timidly walks up to the window to see how many are out there. She sees about 5 “men” walking around aimlessly in front of the station. One of them turns around so Joe can see its grayish face. Joe gasps and falls to the ground when she sees bloody drool pouring from the mouth of her dad. She gets up and watches him move in her direction. He lifts his stained-red hand up to the window and stares into Joe’s eyes.

“He recognizes me,” Joe whispers.

She moves the desks far enough away from the door so her tiny body can squeeze out. She can hear the screams of the crew inside, telling her to come back, but she keeps running toward her dad. Once in his arms, she feels his teeth rip through her neck, but she doesn’t feel any pain. She falls to the ground, her body slowly becoming numb. Relief rushes over her.