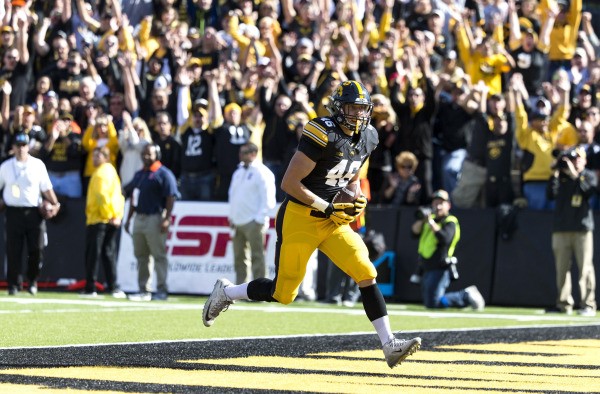 On a windy and somewhat chilly with the fans out in full force (66,693), Iowa surpassed almost 500 total yards in a back-n-forth game and pulled out with a 29-20 victory with as Ferentz called a “gutty performance versus a good Illinois team.” Iowa reaches bowl eligibility at 6-0 and happy they did but the main focus is winning each game in this stretch of tough Big Ten games.

Iowans second drive of the game, Beathard executed a play-action to perfection  finding George Kittle streaking behind the defenders towards the end zone for a 21 yard score, but Marshall Koehn missed the PAT.

The fighting Illini answer right back with a TD on the ensuing drive by Keshaun Vaughn to put them up 7-6.

About the next 15 minutes remained scoreless until Beathard found Jordan Canzeri on a screen pass to the left and with a row a blockers, he took it up the sideline for the 17 yard score. Putting the Hawks back on top 13-7.

Iowa added a late Field Goal to lead at half 16-7.

The Fighting Illini scored the first 6 points of the 2nd half on a pair of Field-Goals of 37 and 40 yards by Taylor Zalewski to pull within 3 at 16-13.

Momentum was swinging a bit in Illini favor as Iowa offense hadn’t been able to move much offensively after putting up 298 yards in the first half. The first play from the line of scrimmage for Iowa after Illinois 2nd Field-Goal, C.J. Beathard audibled into a HB counter for Canzeri with a pulling Right Guard. Canzeri found a nice cutback lane and found a couple extra gears going untouched on his way to the 75 yard Touchdown. To increase Iowa’s lead 23-13 Ferentz said ” CJ has his head in the game, doing well physically but really doing a good job mentality too.  He gives us another option with great communication with the staff.”

To read more on Jordan Canzeri’s career day, check out an article by my colleague Dylan Anderson, http://krui.fm/2015/10/10/canzeris-record-breaking-performance-propels-iowa-to-victory/

Another player that stepped up today was true Freshman Jerminic Smith who caught his first pass as a Hawkeye and really seemed to be on the same page with Beathard, easily breaking free from defenders. He also  made a couple nice blocks on runs by Canzeri, which Ferentz pointed out in his post game report.

The Fighting Illini ran multiple tricks plays with a couple flea flickers which had been marginally successful. It was a 3rd and 1 for them at Iowa’s 40 to start the fourth quarter, they took a chance and tried a reverse pass with their best player Wide Receiver  Geronimo Allison and the Hawks defense wasn’t fooled, Allison throwing it right to Greg Maybin who easily intercepted it.

Illinois did add a touchdown on their next possession to cut the deficit 23-20 but that’s as close as it would get as Iowa added two more Field-Goals by Koehn to seal the game 29-20.

Enough can’t be said about Iowa’s 4th quarter defense after last week in Wisconsin and then this week forcing 3 turnovers( 1 on downs) in 4 possessions.

Stars of the game

Jerminic Smith had 4 receptions for 118 yards.

The victory was somewhat dampened by the news that broke about Senior DT Drew Ott tearing his ACL in his right knee on a punt rush, but Ott will continue to be a leader on the sidelines like he did after coming out on crutches.

HB Leshun Daniels is still “treading water” but is starting to climb the latter to his return, same thing with  OL Brandon Myers

OL Jordan Walsh hurt his shoulder in the first half but returned in the 2nd half.

Tune in next week as Iowa travels to Northwestern right here on KRUI 89.7 FM at 11 AM!