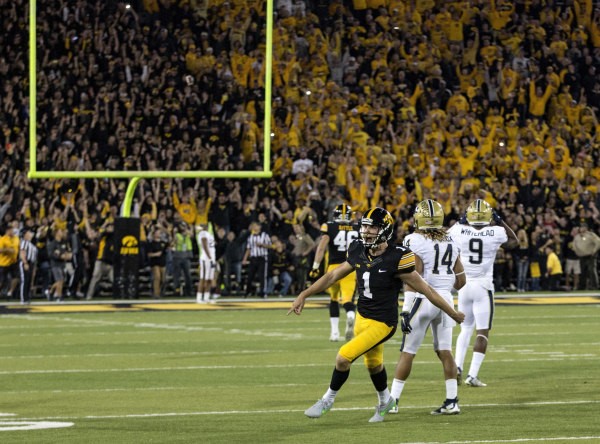 Iowa City, Iowa–  The Hawks hosted their first night game since 2012 and we weren’t disappointed with a game-winning field-goal by Marshall Koehn. The atmosphere was great with 63,000+ and with former Hawkeye great Brett Greenwood  as the honorary captain  leading the team onto the field. Words cannot describe this special moment to the players, fans and especially Ferentz. Ferentz called the win “Icing on the cake, but it’s all about the people.” Greenwood suffered from a heart arrhythmia back in 2011 and is still recovering.  The effort and determination shown by Greenwood  speaks to the person he is regardless of the situation. Also in attendance was Robert Gallery.

Iowa’s first drive was three and out and Pittsburgh took over deep in their own territory and on a 1st and 10, Desmond King made an excellent stretching interception to give Iowa great field position.

Iowa with the short field position had a Field-Goal to give them the early 3-0 lead. Pittsburgh drove into the Red-zone on their next possession but Desmond King was there again to intercept in the End-zone giving him his 2nd INT of the quarter.

A few drives later after a 51 yard completion to Tevaun Smith, C.,J. Beathard scrambled for a 9 yard Touchdown to make it 10-0.

On the next drive Beathard threw a interception at Iowa’s 33 yard line which lead to a 1 play Play-action pass touchdown for Pitt to make it 10-7.

On Iowa’s last drive of the half Jordan Canzeri scored on a 4-yard Touchdown to make it 17-7 at the half. Iowa wasn’t able to do much rushing the ball in the first half but that didn’t faze the offense.

Pitt came out in the third quarter with guns firing, getting a field-goal and then blocking a punt for a Touchdown to tie the game at 17 just like that. Special Teams have been an issue from time to time for Iowa.

Iowa scored a go ahead Touchdown on a 1-yard run by Canzeri to make it 24-17 with 6 minutes left. Pitt answered back to tie it on a pass to Tyler Boyd to tie it at 24 with just under 1 minute left.

There was some question whether Iowa would just play for overtime like they have in the past but the decision worked great! Iowa started with the ball at their own 30. A couple scrambles by Beathard and a pass to the tight end Coble for 4 yards, Marshall Koehn was given a shot at a 57-yard field-goal. Pitt called a timeout to attempt to ice him but it didn’t work. As Koehn nailed the field-goal, the celebration began!

The offensive star of the game goes to C.J. Beathard although he threw his first INT of the year, a near flawless performance.

The defensive star of the game goes to Desmond King with the 2 INT’s.

Tevaun Smith lead the receivers with 73 yards on 3 catches

Cole Fisher  lead the team in tackles with 12, followed by Jordan Lomax with 11.

Be sure to tune in next Saturday as Iowa takes on North Texas lead by former Iowa State rival coach Dan McCarney at 2:30 PM, here on KRUI 89.7 FM