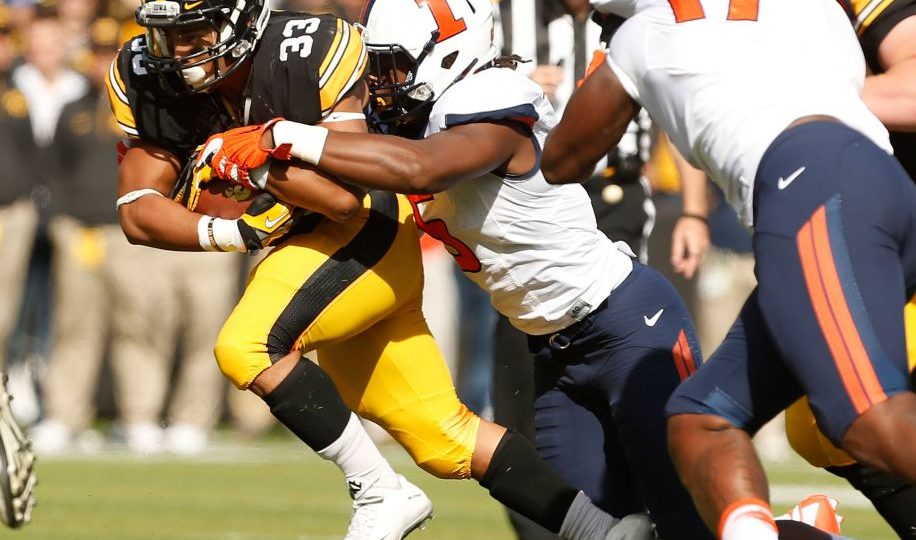 It was the Jordan Canzeri show early and often inside Kinnick Stadium for Iowa’s Homecoming tilt with the Illinois Fighting Illini. The senior tailback had one of his best games as a Hawkeye in the 29-20 win over Illinois.

Canzeri carried the ball a school record 43 times for 256 yards and a touchdown. The previous school record for carries in a game was 42, which was set by Sedrick Shaw against Michigan State on October 7, 1995. The 256 rushing yards are the third most in program history. The all time single game rushing record was set by Tavian Banks when he rushed for 314 yards against Tulsa on September 13, 1997.

He was also the only running back to take a handoff from quarterback C.J. Beathard. LeShun Daniels was held out of the game due to his lingering injury issues.

“You never really know what you’re capable of until you push through the barriers that you have set up for yourself,” Canzeri said after the game.

The biggest play of the game from Iowa came on Canzeri’s 75-yard touchdown run where he went untouched into the end zone and gave Iowa a lead they would not relinquish. That was Iowa’s longest run for a touchdown since Shonn Greene achieved the same feat back in 2008 against Purdue.

The Troy, NY, native has had numerous injury issues over his time in Iowa City, but this season he has put everything together.

He now has 697 rushing yards through six games, and he is well on his way to becoming Iowa’s first 1,000-yard rusher since Marcus Coker in 2011.

Canzeri’s teammates were amazed at the record-breaking performance.

“He does the little things right, and he’s one of the hardest workers on our team,” tight end George Kittle said.

“As offensive linemen, that is what we talk about paving the way for our running backs,” center Austin Blythe said in regards to Canzeri’s performance.

Perhaps the most important drive of the game for Iowa came in the fourth quarter was after Illinois scored a touchdown to get themselves within three points of the Hawkeyes. Iowa gave him the ball on the first twelve plays of the drive and melting almost four minutes off the clock.

“I knew my team needed me and I was tired, but I knew I needed to step up and finish strong and hold onto the ball,” Canzeri said.

Coach Kirk Ferentz was not concerned with the number of reps Canzeri was getting throughout the afternoon.

“We all saw something special with Jordan,” Ferentz said after the game.

“There was no pitch count. In a game like this, you have to roll with your best players. We had to,” Ferentz added.

Iowa cannot expect to have Canzeri carry the ball 43 times a game the rest of the way and stay fresh, but for today it worked.

The Hawkeyes will face a tougher test next Saturday when they travel to Northwestern to take on the Wildcats. Kickoff is set for just after 11:00 A.M. from Ryan Field in Evanston.