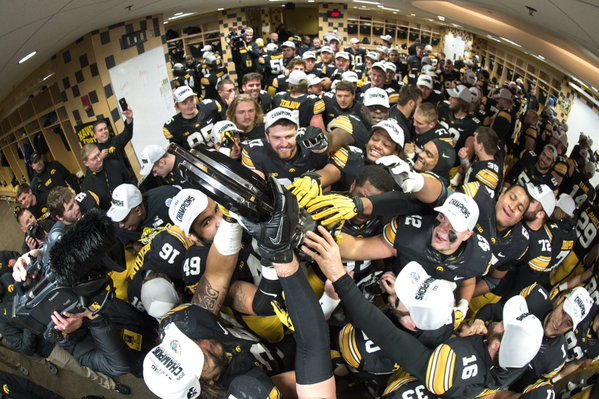 over six inches of snow by kickoff but the grounds crew had the field ready to go for senior day and the 2015 home finale at Kinnick Stadium.

The undefeated Iowa Hawkeyes (10-0) took on the Purdue Boilermakers (2-8) for a chance to clinch a spot in the Big Ten Championship game. The Hawkeyes dominated the first quarter of the game. Purdue had the first crack in the game but the Hawkeyes forced a three and out. Iowa drove down the field in just five minutes and Leshun Daniels punched in a 2-yard touchdown.

The Hawkeyes forced another three and out and got the ball back in Purdue territory. The Hawks marched down the field for a second time and Leshun Daniels added his second score of the day, extending the Iowa lead to 14.

Iowa appeared to have all momentum heading into the second quarter. During Purdue’s third possession  Hawkeye safety, Jordan Lomax, put a devastating hit on Purdue quarterback, David Blough. The hit forced a fumble and forced Blough out of the game. Iowa turned the fumble into points when C.J. Beathard found Matt VandeBerg for a 7-yard touchdown.

Momentum began to shift when Iowa missed the extra point; their fourth missed PAT on the season. Austin Appleby replaced Blough at quarterback and Appleby came off the bench firing. In the second quarter he led Purdue down the field, resulting in a 1-yard rushing touchdown by Markell Jones.

Iowa made its first mistake when C.J. Beathard fumbled on a QB run. Appleby helped hurry the Purdue offense down the field allowing them to kick a field goal before the half making the score 20-10 in favor of Iowa. Austin Appleby was nearly unstoppable completing 10-11 passes for 98 yards in the quarter. Appleby finished the day 23 for 40 with 259 yards and one touchdown.

Iowa came out flat in the third quarter and gave the ball right back to Purdue. Purdue tacked on another 3 points and then forced another punt by the Hawkeyes. Both teams failed to move the ball until C.J. Beathard found George Kittle wide open for a touchdown completing a 91-yard touchdown drive.

The Hawkeyes controlled the game from there on out and added another touchdown to Henry Krieger-Coble. Senior Running back broke off a 42-yard touchdown with just over two minutes remaining in the game. Canzeri was Iowa’s leading rusher on the day with 95 yards and a touchdown.

The final score was 40-20 in favor of the Iowa Hawkeyes. The Hawkeyes are officially the Big Ten West Champs and are now 11-0 on the season. The victory guarantees Iowa a spot in the Big Ten Championship on Dec. 5th. Their opponent has yet to be decided. C.J. Beathard told reporters after the game “We aren’t where we want to be yet.” The Hawkeyes have more than just the Big Ten West title on their minds.

Iowa travels to Lincoln Nebraska for what looks to be a Friday thriller against the Cornhuskers. Nebraska beat Iowa last year leaving a bitter taste in the Hawkeyes mouth. Desmond King talked about the game last year and said, “It does bother him(Coach Ferentz).” Kickoff is at 2:30 Central Time.