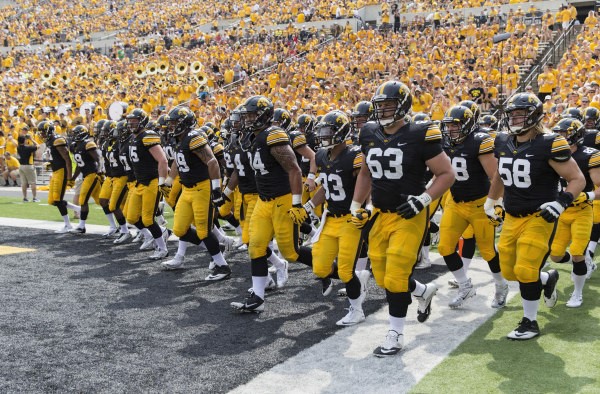 Iowa City– Not a sellout with roughly 60,000 in attendance but that didn’t affect the Hawks as they jumped early and often on Illinois State at  Kinnick on a hot and very humid day.

Iowa scored on their first possession capped off with a 6-yard run by quarterback C.J. Beathard. The plan early was obvious. Get the ground game with Leshun Daniels  and pass as needed to keep the ball moving.

In that first touchdown drive, Iowa went for it on 4th and 2 deep in enemy territory and converted on a pass to Tevaun Smith, their clear cut go to receiver. Ferentz said after the game, ” We’ve developed a comfort level with fourth downs going back to last season.”  Expect to see chances taken again often in 4th and short situations.

After a punt, Iowa put together their best drive of the day marching 99 yards, set up nicely with a couple of medium passes for roughly 20 yards a piece. Jordan Canzeri caught a pass out of the backfield, with blocking and speed turned it into a 21 yard gain. Canzeri then scored later in the drive on a 5 yard run to make it 14-0.

The favorite play for the fans  was a fake field goal run by the kicker Marshall Koehn, he ended up coming two yards short of the first down, giving the ball back to Illinois State. That play while unsuccessful, created a lot of buzz in Kinnick and on the Hawkeyes sideline.

Iowa added a late field goal to lead 17-0 at the half.

The first three possessions resulted in punts for both sides. Playing the field position game, Iowa started their next touchdown drive at Illinois State 43 yard line. This was another balanced attack between run and pass while converting on another 4th down to keep the drive alive. Beathard found Matt Vandeburg on a bubble screen who dove into the end-zone for a 9 yard touchdown making it 24-0.

Iowa scored  again on the following possession, primarily running the ball with LeShun Daniels. That drive was capped off with Beathard’s 2nd rushing touchdown of the day from 1 yard out to make it 31-0.

The 2nd string was brought in mid-way through the 4th quarter and gave up two touchdowns to make the final score 31-14.

I really didn’t real speak much about the Hawkeyes defense but it was outstanding creating pressure on the quarterback all day, recording 5 sacks and even blocking a field goal attempt. The defensive stars of the game were Cole Fisher with 8 total tackles, Nate Meier 6 total tackles with one sack, and Drew Ott with a couple of sacks.

The offensive stars of the game were: Beathard with 211 passing yards and 3 total touchdowns (1 passing, 2 running), LeShun Daniels being the workhorse carrying 26 times for 124 yards, Jordan Canzeri  who had 118 total yards, and Matt Vandeburg who had 59 receiving yards and a touchdown.