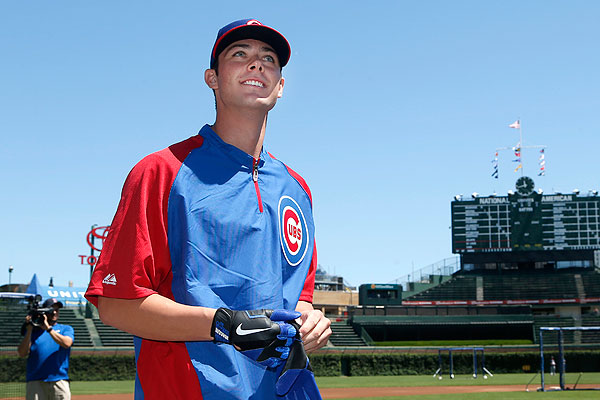 The time is finally here Chicago sports fans. Excitement is through the roof as the wait is no longer. No, I am not just talking about the Bulls and Blackhawks being underway in the playoffs (although that is exciting in its own way), but rather the other team that we all know and love. Yes, of course I am talking about the beloved Chicago Cubs and the appearance of their long awaited prospects that expect to greatly boost an up and coming club. Last week the number one top prospect in baseball Kris Bryant made his MLB debut and less than a week later the number three prospect Addison Russell did the same. Add that to a lineup already filled with the power and all-star capabilities of Jorge Soler, Anthony Rizzo and Starlin Castro, and that equals opposing pitchers’ worst nightmare.

A 6’4 college phenom out of San Diego State, Kris Bryant was a household name as soon as he was drafted by the Cubs second overall in the 2013 MLB draft. A mix of extreme power along with patience at the plate, there was good reason why Cub faithful was chomping at the bit to see this guy make his way to the majors. Amassing forty-three home runs in 2014 at the AA/AAA level and a stellar spring training, it was only a matter of a short time before he would join the roster. After a flurry of injuries from infielders Mike Olt and Tommy La Stella, Bryant was called up to fill the third base role just after eight games into this young season.

Lost in one of the most anticipated debuts in a long time, is the other star emerging from the minors in Addison Russell. With the second base position being the achilles heel of this club, with a combined batting average of only .077, the converted shortstop was called up to help the lower part of the lineup and to fill this role. The flashy 21- year-old created a stir around Chicago when he was acquired from Oakland in exchange for pitchers Jeff Samardzija and Jason Hammel (who is back with the Cubs). Known for his defensive craft and quick hands at the plate, Russell quickly crept up the farm system to find himself on a major league roster before previously thought.

With the addition of these two prospects, the Cubs now hold the youngest infield in all of baseball with no one being over twenty-five years of age. Barring any trades, the infield in Bryant, Castro, Russell, and Rizzo all are contracted in until the 2020 season, which means this crew should only get better with time.

With only a handful of games in the rearview for the 2015 campaign, not much is certain in a long 162-game stretch, but what is for sure is the hype is real and this team is ready to compete. Chicago has waited a long time since this much excitement has swept the Cub faithful. We all know of the hundred and some year drought and fans are eager to get that monkey off their bat. Will this year be the year? Will next year be the year? Well, a lot of things will have to fall into place for that feat, but for now let’s just appreciate players like Bryant and Russell and have a fun summer watching this rising ball club. I know I will.