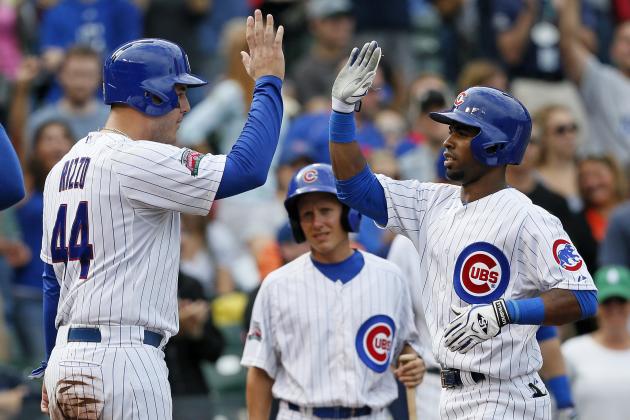 Hey! Hey! We have finally reached the last team. 1908 was the last time the Chicago Cubs won the World Series. The curse of The Billy Goat has haunted the Cubs for decades now. The Boston Red Sox had a curse that haunted them in a similar way for year. That curse was broken when Theo Epstein put together a championship team back in 2004. Epstein has been working on putting together another championship team, but in Chicago. The Cubs have showed promise over the past few seasons, and there has never been so much hype around this team. The Cubs added a few guys to help their cause. Lets take a look at the changes heading into 2015.

First thing is first. Cubs fans… RELAX. This is not a team made of declining superstars and the plan was never to win it all in 2015. The Cubs are a young and inexperienced team. Maybe just maybe 2016 will be the year, but 2015 should be focused on improving to a .500 record. The pitching staff received a major upgrade this offseason when the Cubs signed Jon Lester. The left-handed pitcher has dominated the AL East for years and will now have a shot at the NL Central. Lester finished 2014 with a 2.46 ERA through 219.2 innings. He has excellent control and will utilize his cutter against all batters. Jake Arrieta holds the second spot in the rotation and will be looking to repeat his 2014 season. He held a 2.53 ERA through 156.2 innings last season. The Cubs signed Jason Hammel this offseason when he became a free agent. Hammel will provide the Cubs with a consistent outing every 5th day. The back end of the rotation should go to Kyle Hendrick and Travis Wood. These pitchers can do something that most cannot… they can hit! I’d be willing to bet Travis Wood finishes with 5 home runs in 2015.

The Cubs have a lot of depth to work with in 2015. Tommy La Stella and Mike Olt will fill in at third until Kris Bryant reaches the Majors. Asmani Alcantara and La Stella will swap turns at second base until Javier Baez gets called back up. Baez was sent down yesterday due to his inability to improve his plate discipline. Chris Denorfia is a nice virtue to have in the outfield. He will most likely be used against left-handed pitching, considering he hit .284 again lefties over the past three seasons. Dexter Fowler will play centerfield and bat leadoff. He finished with a .393 batting average when leading off an inning in 2014. He will set the platter for the power guys.

Anthony Rizzo and Starlin Castro both had great years in 2014. Both finished with a batting average of .286 or higher and double digit home runs. Rizzo hit 32 long balls and drove in 78 runs last season. Castro showed consistently with his bat and finished with a .292 batting average. Both hitters will be looking to repeat what they did in 2014. The Cubs added two new catchers this offseason. Miguel Montero comes from Arizona and brings a left-handed bat to the lineup. He has some pop left in his swing and should be able to drive in a solid amount of runs. Montero finished with a .243 batting average and hit 13 home runs in 2014. David Ross was signed for his leadership skills and his relationship with Jon Lester. Ross has caught for Lester for the better part of his career and knows how to bring out the best in Lester. Ross will give Montero a nice break and provides Joe Maddon with more options.

Speaking of Joe Maddon…. the Cubs signed Joe Maddon! I know, I know, it’s exciting. Maddon took the Tampa Bay Rays to the playoffs 3 consecutive years and will be looking to bring his success to Chicago. He has a special skill of working well with young players. This team is full of youth, so it’s only a matter of time before Maddon works his magic.

Everyone is talking about Kris Bryant right now and I’m not saying that he won’t break out, but I’d rather talk about the other guy. Soler has a talent that very few players posses. Through the first 3 weeks of spring training games, Soler had not swung at a single pitch outside the strikezone. He has incredible discipline and that will set him aside from everyone else. He finished 2014 with a .292 batting average and 5 home runs.  He has all the tools he needs to be successful. If healthy I expect:

To me, Jake Arrieta has the most important role in 2015. We know Lester will be solid, we know what to expect from the bottom half of the rotation and we know the lineup will produce runs. We aren’t sure what we will get from Arrieta. He had an outstanding 2014 season finishing with a 2.52 ERA through 156.2 innings. If he repeats his 2014 season, the Cubs could make the playoffs.

The Chicago Cubs will be good in 2015. They will hit a lot of home runs but will also make a lot of mistakes due to their youth. They will be an exciting team to watch with all the young talent. Expect them to improve each year.