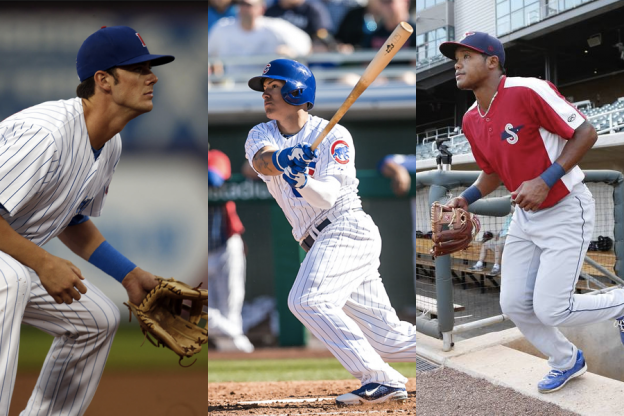 If you’re a baseball fan and can’t make it to the revamped Wrigley Field (aka Friendly Confines) then Principal Park the home of the Chicago Cubs triple-A affiliate is a great alternative. It’s very rare to have two major league ready prospects and one former top prospect to start the season.

I’ve been to Wrigley a few times, but my last trip a few years ago had three lanes merge into one lane to pay a toll; it literally took an hour to move one mile. Plus you basically have to make Chicago a weekend deal. You normally won’t want to travel three hours to see a three hour ballgame, and then drive another three hours back.

The Iowa Cubs start the season with two of the most talked about prospects in baseball: Kris Bryant and Addison Russell.  Then you have Javier Baez, who has been compared to Gary Sheffield, .

Bryant is the #1 ranked prospect according to sources such as Baseball America and ESPN. And the feud between Scott Boras (Bryant’s agent), and GM Theo Epstein has also garnered a lot of attention.

We all knew the chances of Bryant being on the opening day roster were slim to none, mainly because Theo has never had a rookie in his years in Boston or Chicago make the team out of camp. He claims it was a “baseball decision”, which in some sense was to get Bryant more practice in the outfield. And the theory behind sending him to Iowa till April 12th, the Cubs gain an extra year of his contract through 2022 instead of 2021.

Bryant tore up minor league pitching last year hitting .325 with 43 home runs and 110 runs batted in, so there is no question he can hit minor leaguers. He will split time at third and left field, but hopes to remain at third. The Las Vegas native is a pure power hitter, who can hit the ball to all fields and for average.  But minor league numbers don’t always translate to the show, so I expect a tiny adjustment period once he is called up before he puts up the numbers he has in the past.

Given the Chicago Cubs lackluster offensive performance Sunday, Bryant could add some extra protection to the middle of the lineup.

Yes, it was just one game, so we can’t look into it too much. But the Cubs were 0-13 with runners in scoring position. Though the added dimension was the larger strike zone, which Wainwright was able to take more advantage of than Lester.

The Cubs acquired Russell in the blockbuster trade last summer where we sent Jeff Samardzija and Jason Hammel to Oakland, and is considered by many to be major league ready at shortstop. He hit .295 with 13 home runs and 45 runs batted in last year across three minor league levels. He is considered a major defensive upgrade over the sometimes lackadaisical Starlin Castro. The earliest they project him in Wrigley is June, but in my opinion July is a safer assumption. However, I’ll discuss those scenarios a little later.

The last major player, Javier Baez, was a bit of a surprise to be starting in Triple-A. Though last year as a mid-season call up, in 213 at-bats he struck out 95 times and drew only 15 walks while batting .169  Baez lacks plate discipline which leads to a high strike out to walk ratio. However, he did contribute 9 home runs, and has the potential to be a 40-homer hitter. But if he hits near the Mendoza line (.200), that will more than likely hurt the team more than help it. Though he has superior defensive skills, which Joe Maddon has praised numerous times in spring training, I honestly can’t begin to guess when he might reach the majors again.

What does the surplus of infielders mean? It most likely means one will be traded or position changes will take place. The major league Cubs already have Rizzo at 1st base for the next several years and Castro at shortstop for the time being. That leaves 3rd base and 2nd base open, for three players.

While there are multiple scenarios that could take place, I see these two as the most likely outcome:

They trade Castro to a team in need of a shortstop (most linked to Castro are the Mets and Padres), which opens up shortstop for Russell with Bryant playing 3rd and Baez playing 2nd.

They move Bryant to the outfield, leaving 3rd base open for Castro, Baez or Russell. This would benefit the Iowa Cubs the best because that would probably mean an extended stay for Russell or Baez while they change positions.

I personally prefer scenario 2 because that would be one heck of a lineup, later in the season for an opposing pitcher to face. Though I like Castro, if Maddon can’t fix his mental errors, then it’s time to move on to the younger improved defensive guy.

In reality, scenario 1 is more likely because while Castro’s defense has improved, he still makes errors that a two-time All-star shouldn’t make. This would be bad news for the Iowa Cubs because that leaves all three spots open for the three players without position changes needed.

Those are three of the prospects we will see to start the season in Des Moines but also expect at some point to see pitching prospect C.J. Edwards, the Cubs first round selection in last year’s player draft catcher Kyle Schwarber, and Outfield prospect Alberta Almora.

More than one trip to Principal Park might be necessary if you enjoy baseball games.