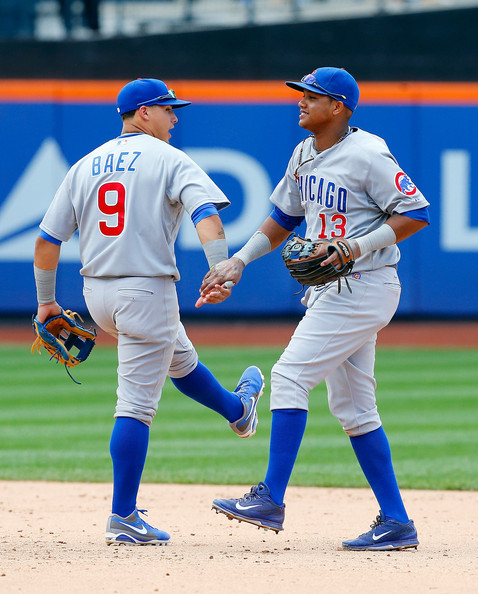 In the three seasons since Theo Epstein took over as Cubs president, the Cubs have gone a combined 200-286, good for a .412 winning percentage.  However, this was all part of a master plan to completely revamp the Cubs minor league system and eventually make a big splash in free agency, and in the offseason following the 2014 season, the Cubs made sure they let the rest of the MLB know that it was ready to make an impact.  Once Joe Maddon opted out of the final year of his contract with the Tampa Bay Rays, Chicago quickly picked him up in a decision that was a no-brainer.  No disrespect to Rick Renteria, who did a fine job last season in Chicago, but with Maddon the Cubs got a manager that was a proven winner with Tampa Bay teams that always had significantly less talent than the Red Sox and Yankees and yet routinely contended with those teams for the AL East.

But the Northsiders weren’t done after finding a new manager, they also acquired two-time all-star catcher Miguel Montero from the Arizona Diamondbacks, re-signed pitcher Jason Hammel, who was on pace to have the best season of his career with the Cubs before being traded to Oakland last July.  Also, in a move late in the offseason, the Cubs acquired speedy center fielder Dexter Fowler from the Astros in exchange for Luis Valbuena.  Most of all, the Cubs made the biggest splash of free-agency when they signed Jon Lester to a 6-year/$155 million contract.  Lester finally gives the Cubs a true ace, and along with Hammel, gives them a veteran presence in the rotation.

This season’s outlook for the Cubs appears much more hopeful than in previous years.  The Cubs pitching was its strength last season, and the addition of Lester can only help that.  Jake Arrieta, who was acquired along with reliever Pedro Strop in a trade from Baltimore, finally showed the potential that many believed he had.  Arrieta finished 2014 with a 10-5 record to go along with a 2.53 ERA and 167 strikeouts in 156 2/3 innings.  It seemed like every single start he was flirting with a no-hitter and if he can replicate his success from last year, he should be a very solid second starter behind Lester.  Kyle Hendricks was another young player that burst onto the scene last year.  He essentially took over for Jason Hammel last season and performed exceptionally well, going 7-2 with a 2.46 ERA in 13 starts.  If Chicago can get repeat performances from Hammel, Arrieta, and Hendricks

in 2015, it should have a very formidable rotation.  The Cubs also had a terrific bullpen last season.  Neil Ramirez was called up to the majors in May and was flirting with an ERA around 1.00 for most of the season until a rough outing late in the season caused his ERA to finish at 1.44.  Pedro Strop was again productive as the 8th inning set up man, and Hector Rondon was the surprise of the Cubs season.  Thought by many as a fringe roster player at the beginning of the season, Rondon ended up taking over for Jose Veras as Cubs closer in late April and pitched well for the entire season.  In 64 games, Rondon had a 2.42 ERA and converted 29 of 33 saves and should be the Cubs closer going into the season.

The Cubs lineup is one that continues to look better and better with the addition of many of the Cubs’ top prospects and offseason moves.  One of the more underrated moves Chicago made in the offseason was acquiring Fowler from Houston.  Fowler gives the Cubs a true leadoff hitter it hasn’t had in a very long time.  Fowler hit .275 last year, but more importantly he had a .376 on-base percentage, a statistic that the Cubs have struggled with over the last five years.  In addition to Fowler, the acquisition of Miguel Montero gives them another solid bat in the middle of the order.  Anthony Rizzo and Starlin Castro should

be their normal, productive selves in the middle, but the two hitters that have Cub fans giddy are right fielder Jorge Soler, and third baseman Kris Bryant.  Soler and Baez both got a taste of major league action last season, with Soler hitting 5 homeruns and 20 RBI in just 24 games.  Baez struggled, hitting just .169 while also accumulating 95 strikeouts in just 213 at-bats, but even he flashed the potential of the player he could be.  As for Bryant, he was voted as the number 1 prospect in all of baseball and he has backed that up with his performance in the minors last season and the spring this season.  Bryant hit 43 home runs last season in the minors and leads all of the Cactus League with nine homers in the spring, the most impressive being an opposite field blast off Mariners ace Felix Hernandez.  However, much like Baez, Bryant also strikes out an awful lot, but the Cubs would gladly trade 40 home runs for 200 strikeouts.  This will be a lineup that will hit a lot of homeruns and strike out a lot as well, something that is becoming more typical of lineups throughout the MLB.

Cubs fans have had to wait a very long time for them to put together a competitive team that is exciting to watch, but in 2015, that is likely to change.  This team probably isn’t good enough to make the playoffs yet, but if all of the prospects perform close to what they are projected to be, this will still be a very fun team to watch.  Reasonable expectations for the Cubs this season would be a winning record, with the team being in the mix for the final wild card spot.  For the first time in a long time, Cubs fans have a team to truly get excited about.