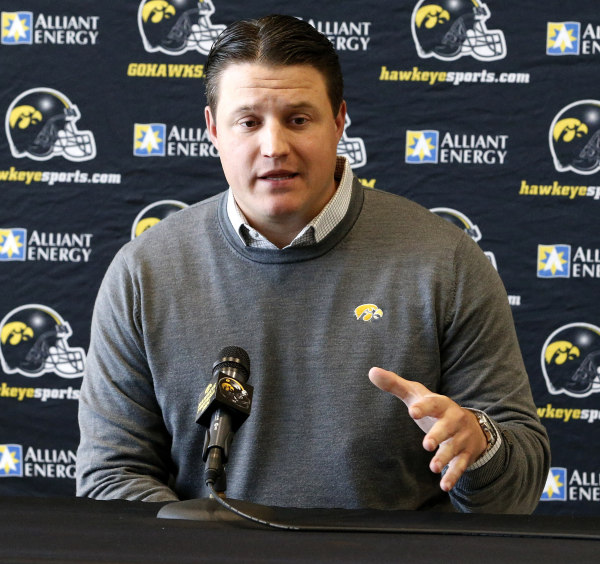 IOWA CITY, Iowa—Three Iowa Football assistant coaches held their spring press conference in the All-America Room inside the Hansen Football Performance Center on Wednesday. Recruiting Coordinator Seth Wallace, Defensive Line coach Reese Morgan and Offensive Line/Run Game Coordinator Brian Ferentz addressed the media for over an hour on how spring practice has gone nine practices in and what their individual position groups need to improve upon heading into the 2015 football season.

Wallace was named Iowa’s Recruiting Coordinator in June of 2014 and since he’s taken over, they have tried a few different tactics to try to improve recruiting. Iowa has been going after guys earlier, knowing that high school athletes are committing earlier, even if they haven’t taken an official visit. “We’re being more aggressive on the front end, and I believe it’s paying off,” said Wallace.

Iowa’s spring game isn’t for another two weeks, which is late compared to other football programs in the Big Ten. Wallace says one of the advantages that it gives them is the ability to spend more time with incoming recruits who have been visiting campus over the last few weeks. “We’ve had a lot more kids on campus during spring practice, more than really we ever have,” said Wallace.

One thing that is attracting recruits to campus is Iowa’s new football performance center. “This facility has certainly paid off,” Wallace said. “This is our showcase now.”

Some new faces will showcase on both the offensive and defensive line this season for the Hawkeyes. Offensively, Ferentz will have to coach up two new tackles to replace Outland Trophy winner Brandon Scherff, who is projected to be a top 10 pick and is attending the 2015 NFL Draft in Chicago, and Andrew Donnal, another player who will be playing on Sundays in the Fall. “Our biggest key is developing guys to play on the outside for us,” Ferentz said. “We need to find guys who want to fill some big shoes that were left behind.”

Boone Meyers (6-5, 300lbs) is one of those guys who could have the opportunity to start at one of the tackle positions open for the 2015 season. “Boone is a competitive young guy,” Ferentz said. “He’s tough and he hates to lose. Right now he’s on track to start his first football game at the University of Iowa.”

Ike Boettger (6-6, 300lbs) is another guy in the same situation as Meyers, except Boettger has a little more experience. Boettger stepped in for Scherff when he went down with a knee injury during the Ball State game last season. ”Since the first day he’s joined us he’s been very eager to be a good offensive lineman. He’s very far from that right now, but he’s got the physical tools and I really feel strongly about how he approaches every day.” Ferentz said.

Carl Davis and Louis Trinca-Pasat are gone from the Hawkeye interior defensive line, which means like Ferentz, Morgan has some coaching to do as well. Jaleel Johnson (6-4, 310lbs)  and Nathan Bazata (6-2, 284lbs) are the two front-runners two replace Davis and Trinca-Pasat. Faith Ekakitie should also be thrown in that mix. Kyle Terlouw (6-4, 288lbs), a junior college transfer is also expected to see the field next season. “Really like the guys we are working with,” Morgan said. “They are working hard, making mild improvements but we have a lot of work to do.”

Iowa will host its annual spring game on April 25 inside Kinnick Stadium at 1:00pm.