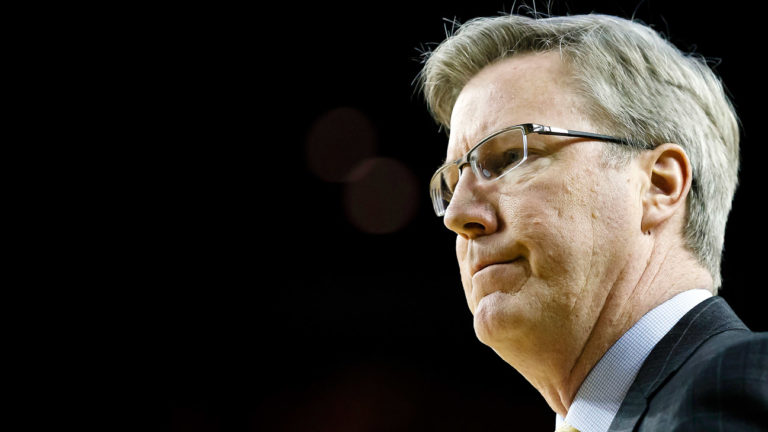 Wherever there are fanatic sports fans, there is major criticism of the coaching. Although the criticism tends to be fair at times and certainly unfair at others, it is always present. The University of Iowa is no exception. The absence of professional sports teams and presence of a major Big Ten school brings intense and loyal fans. Whether these fans are current students, former students, future students or just residents of the state, they want Iowa sports to succeed just like most fans do. Often sports audiences are left feeling unsatisfied after games or seasons, and this is when the inevitable blame game kicks off. A prime example of this is Kirk Ferentz, the longtime football coach, has been under major fire in the last recent years. His conservative style often disgruntles the passionate crowd. Through this season, the men’s basketball team has certainly gone through its ups and downs. The blame for inconsistency often rests on the coach. However, knocking the basketball coaching is where some people have gone wrong.

Fran McCaffery took over a struggling program in 2010 and hasn’t really looked back since. Before McCaffery was hired, the Hawkeyes hadn’t made the postseason since the 2005-06 season. They have not gone past the first round of the NCAA tournament since 2000-01. The culture of winning wasn’t really there for Iowa like it was for many of its Big Ten rivals. Since 2010, McCaffery’s squad has improved in Big Ten wins every single year, and has climbed from 10th place in his first year to 5th in 2015 with a 12-6 record in the highly competitive Big Ten conference. In addition to the consistent improvement of the conference wins, the Hawkeyes’ postseason results have improved from year to year under McCaffery. In his first year, the Hawkeyes were not fortunate enough to reach any sort of postseason. In his second, they reached the second round of the less prestigious NIT, and lost in the Championship in the same tournament the next year. Last year, the team lost in the first round of the NCAA tournament as they stumbled late down the stretch of their season. In contrast, they have finished this year with six straight wins after two tough losses to lesser opponents in Minnesota and Northwestern. This late streak has them sitting at a 7 seed in Joe Lunardi’s recent mock bracket, as opposed to last year, where the team was forced to play Tennessee in a first round play-in game for the rights to the 11 seed.

Often, smaller-name coaches yet to cement their legacy get blamed for the struggles a team may experience, but rarely will they receive immense credit when the team turns it around. The players usually get that. Take Aaron White, for example. The senior is without question the most important player on the team, but he wasn’t always a star. The first team all Big Ten player once was a skinny kid coming out of high school with no offers from the bigger time basketball programs around the nation. Northwestern and Boston College were the only other two power five conference offers for the Ohio native. McCaffery, as well as his staff, can be credited with seeing something in the beloved superstar that at one time, not many others saw.

While it will be interesting to see how the sometimes hot-headed coach fares in this year’s tournament, there is no question McCaffery has brought Iowa Basketball back. Although the strange inconsistencies of the team may frustrate fans, we must be patient. Whatever our coach is doing is works, and the statistics and year-by-year improvement  are evidence of that.