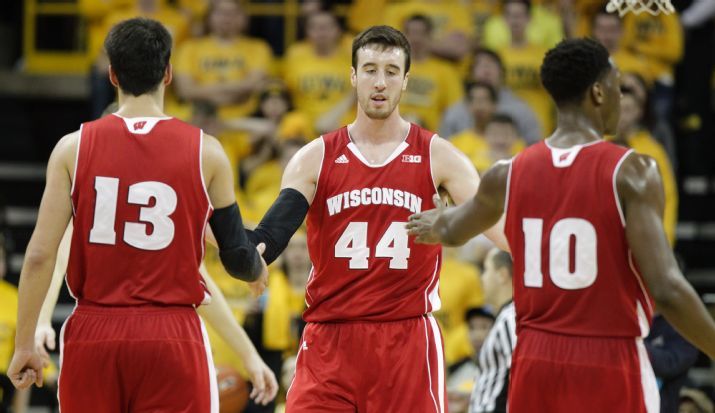 IOWA CITY– The 5th ranked Wisconsin Badgers (19-2,7-1) traveled to Iowa City to take on the Iowa Hawkeyes (13-8,4-4) inside Carver-Hawkeye arena in front of a sold-out crowd. These two teams faced off in Madison 11 days ago and the Badgers blew out the Hawkeyes by 32, and today got the season sweep. The Badgers lead the Hawkeyes for 33 of the 40 minutes and eventually defeated the Hawkeyes by a score of 74-63.

You could argue the Hawkeyes played their best basketball offensively in the first half, shooting 64 percent from the field, but intensity lacked on the defensive end and the Hawks trailed by six at the half.

“Their ability to get second shots hurt us,” Iowa head coach Fran McCaffery said. “They have good shooters who take good shots. They are a tough team to guard.”

Wisconsin did shoot the ball well in the first half (53 percent) but the key first half stat was that the Badgers had 10 second-chance points on seven offensive rebounds, and out rebounded the Hawkeyes 15 to 9.

“We just needed to put bodies on guys more than we did,” Iowa forward Gabe Olaseni said. “They went around us, they went through us. That’s all on us.”

Olaseni ended the game with 12 points and 5 rebounds. That’s the ninth time this season he’s scored in double figures.

That key first half stat lead into the second half, and became the biggest key into the Hawkeyes loss. In total the Badgers brought down 15 offensive rebounds and 16 second-chance points.

“If you’re going to look at one thing that really was the difference in the game, it was offensive rebounding,” McCaffery said. “Their efficiency at scoring on second-shot opportunities is probably the best in the country.”

Being outrebounded isn’t something Iowa is use too, and senior forward Aaron White isn’t happy about their rebounding efforts today. “It’s frustrating because we are a good rebounding team. We have size, today was just tough.”

Defensively Iowa forced Wisconsin to miss some shots as they only shot 30 percent in the second half. Along with only shooting 30 percent, the Badgers also had a few scoring droughts, giving Iowa an opportunity to cut or even take the lead.

“That could have been a time where they (Iowa) could have changed the tide, but they didn’t,” Wisconsin coach Bo Ryan said. “We just kept grinding defensively and kept getting the ball back.” If Iowa had any chance of winning this game they needed to make shots when Wisconsin couldn’t. Iowa only scored 27 second half points.

The Hawkeyes will try and end their three game losing streak Thursday on the road against Michigan.