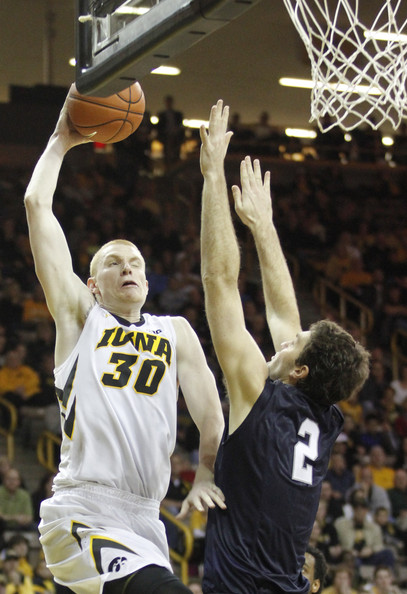 Saturday was my final time in Carver-Hawkeye Arena for a men’s basketball game as a student.  I am a senior, and I have used up my allotment of student tickets.

Saturday was also the last time in Carver for a group of seniors that has won more home games than any class in the history of Iowa basketball.  I consider myself lucky to have been there for most of those games from the first time Aaron White, Gabe Olaseni, Josh Oglesby, and Kyle Denning laced them up in Carver against Chicago State four years ago, to Saturday’s beat down of Northwestern.

More importantly, this group of seniors has symbolized the reincarnation of Iowa basketball.

Iowa basketball was more or less a joke at the beginning of my freshman year.  Carver was a ghost town, they gave free tickets to students for games on ESPN, and Iowa lost to the Campbell Fighting Camels at home.

I decided to give it a chance though, and the first college basketball game I ever attended on any level was this year’s group of seniors’ first college game.

Iowa beat Chicago State 96-53, and some random freshman kid I had never heard of named Aaron White went two for three from downtown and perfect from the free throw line en route to a 19-point, 10-rebound double-double.  I knew very little about Iowa basketball players outside of Melsahn Basabe and Matt Gatens, so I chalked it up as a fluke.

Boy, was I wrong.

Since then, this class has been to the postseason all four years (assuming the selection committee doesn’t lose Iowa’s team sheet) after a five-year hiatus.  They have had a winning season each year after the soul-crushing Lickliter era, and most importantly, they have made Iowa fans care about basketball again.

If Iowa lost at the beginning of my freshman year, I was disappointed but shrugged it off as the norm for Iowa basketball.  By the end of that year, I was checking kenpom.com every day and looking up NIT bracketology.

Now, if Iowa loses a game, I’m an emotional wreck eating ice cream and watching soap operas in my pajamas (not a metaphor).

I am glad those NIT bracketology days are over, and I am excited to say that I get to watch Iowa play on the first weekend of the NCAA tournament for the first time in my life over spring break (I was probably in seventh grade English the last time Iowa was playing in the first round, and Miss Williams was not one to distract our class with basketball on TV).

In conclusion, I just want to say thank you to Aaron White, Gabe Olaseni, Josh Oglesby, and Kyle Denning.  You all have turned me, a former wrestler, into a rabid college basketball fan, and you have given me something to look forward to and care about when I am not being let down by the Cubs or taken on an emotional roller coaster by Iowa football.

Notice I said “each” because I am not ready for this group of seniors to be done.  Let’s go on one last run.