The last time the Iowa Hawkeyes won a men’s NCAA tournament game George W. Bush had been president for less than 6 months, we had not yet experienced September 11th, Tom Brady and Bill Belichick had just won their first Super Bowl, and the universe was unaware of what a “Hunger Games” was.

The last time the Iowa Hawkeyes won an Men’s NCAA tournament game Aaron White was 8 years old and Fran McCaffery was the head coach at UNC-Greensboro where he lead his Spartans to a Southern Conference Championship and first round loss in the NCAA tournament to the Stanford Cardinal.

The last time the Iowa Hawkeyes won a Men’s NCAA tournament was in 2001 when they defeated the Creighton Blue Jays 69-56 before being pounded in the 2nd round by second seeded Kentucky 92-79. That Iowa team featured the likes of Luke Recker and NBA veteran Reggie Evans. After that one win the rest of the Steve Alford era was at best mildly disappointing, posting 3 trips to the NIT and two disappointing first round losses to Cincinnati and 14th seeded Northwestern State in 2005 and 2006 NCAA Tournaments, respectively. Star senior Adam Haluska graduated and Alford never recovered.

Once the Alford Era ended with his resignation after the 2006-2007 season, Hawkeye nation searched for solace in young head coach Todd Lickliter. Lickliter had just completed building the foundation of what would end up being a perennially excellent program at Butler. He did not have such success at Iowa; 3 years, 3 losing records, 0 NCAA tournament appearances.

That massive failure that was the Lickliter era led us to where we are today. Firing Lickliter allowed AD Gary Barta to hire then Siena head coach Fran McCaffery, who had just led the Saints to three straight NCAA tournament appearances.

Despite losing his first game as the Hawkeyes’ head coach to South Dakota State and going 11-20 in his first season on the job in 2011, McCaffery has put the Hawkeyes on an upward trajectory ever since. The Hawks returned to post season play for the first time since 2006 under McCaffery with a trip to the NIT in 2012. They almost won the NIT 2013. Then finally in 2014 “Our man Fran” got the Hawks back to the tournament where they where they lost a play-in “1st round” game to Tennessee.

The Hawkeyes were supposed to peak in 2014. They had a star player, Roy Devyn Marble. The son of the program’s All-time leading scorer, Roy Marble, he was Hawkeye royalty. Marble led the Hawkeyes in scoring as a junior and senior while also finishing 2nd as a sophomore. Marble, combined with the deep roster McCaffery had assembled around him were supposed to be the ones who brought the Hawkeyes back to March prominence.

Unfortunately, that did not happen. After a promising start the Hawkeyes struggled down the stretch. They lost 7 of their last 8, fading in the 2nd half of close games. They cost themselves what seemed like a sure fire tournament bid and played themselves into a play-in game. Everyone who watched that team felt like it left something on the table. I know I did, Marble was our first NBA player since Jared Reiner drafted by the Bulls since 2005 and all we got was a loss in the round of 68. Many Hawkeye fans felt that Iowa basketball under Fran McCaffery had peaked, and it peaked with a play-in game loss.

The disappointing ending to 2014 set up 2015 as a pivot year, Iowa basketball was at a fork in the road. This era was either going to take the path the Alford era took after Haluska left or pave a new direction for Hawkeye hoops. They choose the latter.

Despite the abrupt ending to their season, a 87-68 loss to a 2nd seeded Gonzaga team, the 2014-2015 season could go down as a turning point for Iowa Hawkeye Men’s Basketball. This team didn’t have a star like Marble who could get his own shot whenever he wanted and score 20 the easy way. They had Aaron White, a junk-yard dog who through hell and high water would find a way to get 20 if that’s what his team needed. White scrapped his way to being the program’s second all-time leading scorer. He also became the 1st Hawkeye ever to score 20 points in 6 consecutive games along the way.

The rest of the 2014-2015 squad followed White and noted Philly tough-guy McCaffery’s leadership and took the road less traveled to March. They weren’t a team with a traditional star. White will be an all-time beloved Hawkeye but he wasn’t a star in the way Devyn Marble was a star. He couldn’t dribble past you, but he could run as hard as he could towards the rim and scream for the ball then will-in a lay-up. The fact the Hawkeyes made it two rounds farther behind White than they did with Marble says something about the direction of the program. Anyone could watch Marble and see how he could help a team; a good program finds Aaron White and sees what he can bring a team.

They were a team that won Big Ten road games down the stretch. They were a team that finished by winning 8 of their last 9 instead of losing 6 of 7. They were the team that made adjustments late in games instead of staring at their best player when things got rough. This was a team that picked up the slack for a teammate that had a bad game. Probably most memorable of all, this was the team that in the second half of an NCAA tournament game had Aaron White screaming at Anthony Clemmons: “Give me the ball, he can’t guard me” and then proceeded to destroy the poor 6’4 Davidson player who was guarding him. That was the 2014-2015 Hawkeyes. Sure they got beat by a better team in the next round, so what? This was a step in the right direction for a program that has waited 14 years to take that step. In 2015, Iowa basketball was fun again.

So what now? Iowa made the tournament and pulled off the largest NCAA tournament win in program history Friday night against Davidson. This year seems like it could be the foundation of something.

There is good news when considering these challenges. The Hawkeye men’s team faced similar challenges this year. Someone needed to step up and take over for Devyn Marble’s production; Aaron White and Jared Uthoff did that. They needed better guard play; Mike Gesell and Anthony Clemmons took it up a notch. The bench needed to be reloaded after the graduations of Zach McCabe and Melsahn Basabe; guys like Clemmons and Josh Ogelsby took on more minutes.

We have seen this program answer these challenges in recent memory and the hope is that this will continue to be the case going forward. Aaron White might be graduating, but Iowa basketball is still in the capable hands of Fran McCaffery. If McCaffery continues to impose a culture of toughness, teamwork, and next man up mentality; as well as continuing the strides he’s made for the program’s recruiting; it is hard not imagine this school contending for tournament bids on yearly basis.

It’s hard to predict what will happen in 14 years. I’m not sure what life will be like when I am 33 years old in 2029 but I doubt I will be saying things like: “The last time the Iowa Hawkeyes’ Men’s Basketball team won an NCAA Tournament game the greatest baseball player of all-time Kris Bryant had not played a major league baseball game yet, the first African American president of the United States was finishing off his final term, we still struggled to get good Wifi at times, and no one knew what was.

At the rate we’re going, Fran will have this team winning another tournament game very soon. 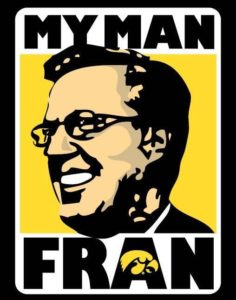