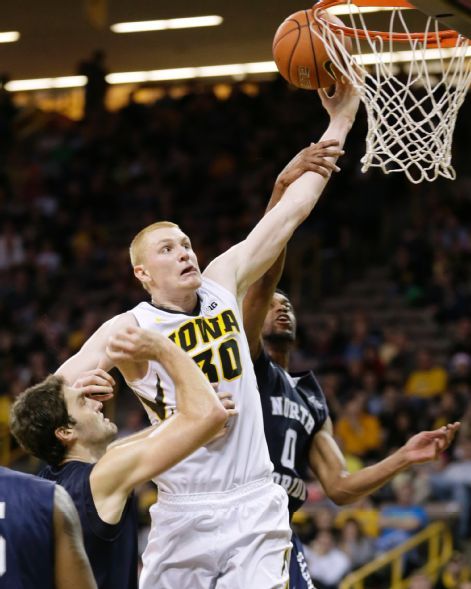 IOWA CITY, Iowa – The Iowa Hawkeyes defeated the Nebraska Cornhuskers 70-59 inside Carver-Hawkeye Arena on Monday night. The Hawkeyes reached the 2-0 mark in Big Ten Conference play for the first time since the 2002-2003 season.

Iowa (11-4, 2-0) started the first half on a tear as they drove to the basket early and often allowing the team to go 15-19 from the free throw line. Hawkeye senior Aaron White surpassed Roy Marble’s career free throw mark of 516, making him the all-time leader in free throws at Iowa. White finished with a team high 23 points, grabbed 9 rebounds and shot 12-15 from the charity stripe.

“We wanted to drive the ball,” Iowa head coach Fran McCaffery said. “[Shooting] 38 free throws is terrific. Our energy and concentration was constant down the stretch.”

The Hawkeyes also saw strong play from senior Gabriel Olaseni who recorded a career high 18 points and also grabbed five   rebounds. Olaseni was able to take advantage of 13 trips to the free-throw line, where he made 12.

“[Olaseni] was playing with great confidence,” McCaffery said. “He made a concerted effort to go inside and try to get to the free-throw line.”

Nebraska (8-4, 0-2) had a strong night shooting from the floor shooting 57 percent in the first half. Things simmered down a bit for the Cornhuskers in the second half as they shot 37 percent down the stretch.

One concern for the Hawkeyes was the play from their guards. Peter Jok, Mike Gesell and Anthony Clemmons combined for 9 points with a majority of those points coming late.

“That’s a combination of things,” McCaffery said. “We weren’t pounding inside, weren’t giving it up early. Those guys can score and they’ll be okay.”

The Hawkeyes will now shift their focus towards their game Thursday night against the Michigan State Spartans in Iowa City. The Spartans (10-5, 1-1) are coming off a 70-50 win over the Indiana Hoosiers on January 5. The Hawkeyes and Spartans are set to tip-off at 7 PM.