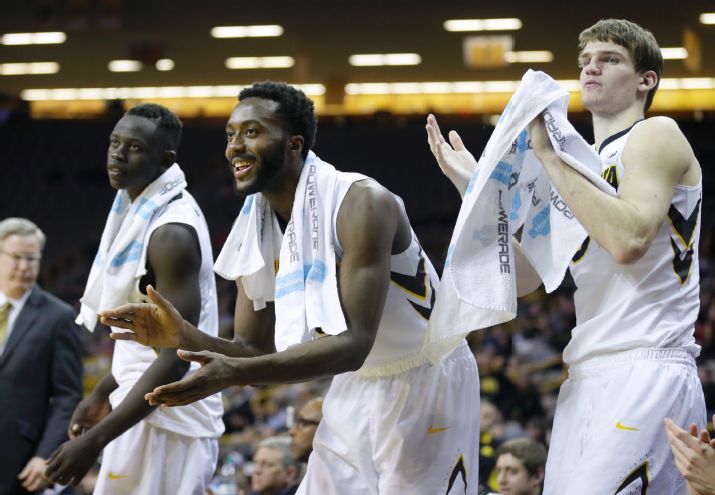 IOWA CITY, Iowa – Last week the Hawkeyes put their NCAA tournament hopes in jeopardy by dropping consecutive contests to Minnesota and Northwestern, both teams under .500 in conference play.

They were not about to drop a third straight tonight.

The Hawkeyes did not trail at any point of the contest and won, by a whopping 34 points, 81-47. The Hawkeyes go two dunks from center Adam Woodbury, an alley  oop dunk from Aaron White, and a pair of three pointers from Peter Jok and Jarrod Uthoff all before the first media timeout. These high energy plays set the tone for the rest of the game.

Jarrod Uthoff led the way for the Hawkeyes with 14 points in only 25 minutes. He also added a team high four steals while knocking down two three pointers and throwing down a thunderous dunk driving the baseline.

When asked if winning this game was especially important after Iowa’s two game losing streak, Uthoff had this to say “Yeah it is, it gets us back on the right track, hopefully we can win the next six in a row.”

One of the biggest positive storylines for the Hawkeyes tonight was Aaron White’s bounce back performance. After a 1-12 shooting night last Sunday in the loss against Northwestern, he had thirteen points in 28 minutes and led the team with 8 rebounds in the win. What stood out about White’s performance wasn’t the amount that he scored as much as it was about how he scored them. He was aggressive in the paint earning three trips to the foul line where he made five of six of his free throw attempts.

He also was on the receiving end of two alley oops, one from Peter Jok in the opening minutes and another from Josh Oglesby on the Hawkeyes last first half possession. His most impressive play however was in the second half with the Hawkeyes making a run that would put away the game for good, when he grabbed a defensive rebound and took it coast to coast and finished it off with a dunk.

Other noteworthy contributions from the Hawkeyes came from senior Gabe Olaseni who scored 12 points and grabbed 6 rebounds and had 1 block off the Bench. Peter Jok continued his strong play with 11 points, knocking down 3 of his 5 three pointers. Freshman Dom Uhl also showed some confidence on the court by scoring 9 points and grabbing 6 rebounds in only 16 minutes.

The Hawkeyes next game is Sunday on the road against Nebraska.