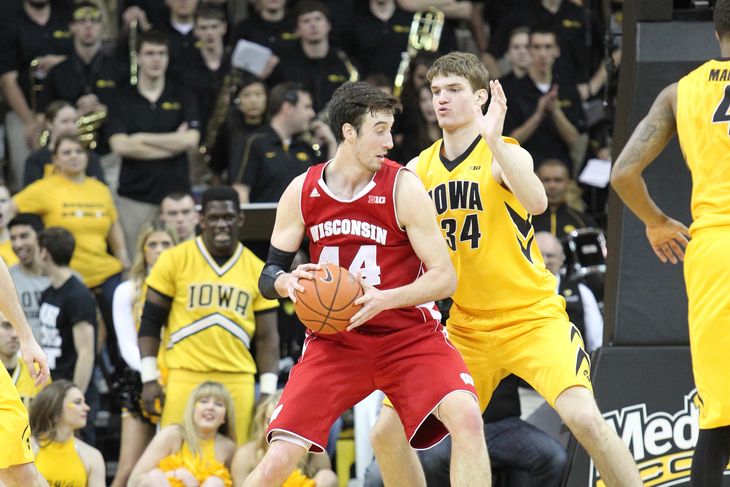 The Iowa Hawkeyes men’s basketball team finally made the national sports’ talking head show cycle this week. It would be a pleasant idea to think that they were in the news because they just came off what was probably their best two game stretch of the season, blowout victories on the road against Michigan and at home against then 16th ranked Maryland. Unfortunately, that was not case.

The Hawks hit the Around the Horn, PTI, His and Hers talking head cycle after Junior Center Adam Woodbury poked Maryland Freshman Melo Trimble in the eye. On paper, that sounds like it could have been accident that happened during the flow of the game. The video disagrees.

Also this wasn’t an isolated incident:

After Woodbury has played what the Baltimore Sun describes “Eye Poping Defense”  multiple times this season, it seems hard to believe these pokes are accidents. ESPN Announcer Dan Dakich even went as far to call Woodbury “Gutless” and “Cowardly”. Dakich made those statements before the the Trimble eye poke occurred and probably crossed a line or two. That being said, it’s still hard to argue Woodbury is doing this on accident. Whether or not Woodbury is really just losing control of his fingers on the court or if he’s intentionally trying to take out the eyes of prominent Big Ten players from the across the nation one thing is certain now: The nation media is watching the Hawkeyes and they are zooming in Adam Woodbury. But maybe that’s a good thing.

As someone who has watched almost every Hawkeye basketball game this year, the most disappointing part of “eye-pokegate” is that it has overshadowed Woodbury’s actual play. One of the most enjoyable parts of this up-and-down year has been watching this guy improve.

After being largely disappointing as a freshman and sophomore, Woodbury has developed into the guy coach Fran McCaffery thought he was getting when the 7-footer signed to be a Hawkeye almost three years ago now. The 7’1, 236 lb. Woodbury was the laughing stock of Hawkeye Nation for two years. He was young, uncoordinated, could not dunk, could not catch the ball, could not rebound and could not hold his ground in the paint. Everyone thought this guy was a joke.

This year something changed. Woodbury got the ball rolling in the second game of the season with his first career double-double, an 11-point, 10 rebound performance as the Hawks cruised past North Dakota State. He was just getting started from there.

Statistically speaking, this is Woodbury’s best season as a member of the Hawkeyes. As you can see above he’s set career highs in minutes per game, points per game, rebounds per game, and free throw attempts per game.

This goes beyond the numbers though. Woodbury’s improved play passes the eye test as well. He’s been more aggressive on offense, frequently cutting hard to the rim positioning himself for easy lay-ups. In past years when he did not have the ball Woody would drift around the free throw line attempting to stay out of everyone else’s way. Now he’s an aggressive cutter, a legitimate threat to score when he crashes down towards the rim after setting a screen, and while continuing to improve in the aspects of the game that have come easier in the past (Screening, hustling, passing). He can still struggle to catch the ball sometimes, but Hawkeye guards are more willing to make that pass now that they know Woodbury will go up hard with the ball if he catches it, likely either scoring or drawing a foul.

On the defensive end of the court, Woodbury has done a lot of work to shake the “soft” reputation he’s developed over the years. He’s still not as good of a post defender as he could be, but Woodbury has thrived as the man in the middle of the trapping zone defense Fran likes to break from time to time. The zone plays to Woodbury’s strengths, making it so he doesn’t have to chase faster big men around the perimeter and allowing to him to swallow up more rebounds down low. Both Woodbury and the Hawkeyes as a whole have had a ton of success with this look, using it primarily during two road wins over Ohio State and Michigan. Part of the reason the Hawks can play this with so much success is that they have confidence in Woodbury as a rim protector, with good reason.

Another sign of how well the season has been going for Woodbury is that the calls to bench him for back up big guy Gabe Olaseni have essentially stopped. Olaseni has had a strong season in his own right, averaging 8.4 points and 5 rebounds per game. In years past Gabe has been the definitively better player of the two Hawkeye bigs, now they cannot go wrong either way. Despite having slightly different skill sets, the Hawkeyes can guarantee they will have a quality big man on the floor at all times when they split minutes between Adam Woodbury and Gabe Olaseni. This was not the case in past years, which again can be credited to Adam Woodbury’s improvement.

The spotlight will be on Woodbury this Thursday as the 15-8 Hawkeyes host the 15-9 Minnesota Golden Gophers at Carver Hawkeye Arena (you can listen to that live on 89.7 FM – KRUI) in a game that could have serious NCAA Tournament Implications. If you want to spend the whole game saying Woodbury is a dirty player, you might be in the right. If those eye pokes were intentional he probably dug his own grave with that one. But just remember, that dirty player is having the best season of his college career. Maybe we should take some time to acknowledge that too.